A research team at the Center for Nanoparticle Research, within the Institute for Basic Science (IBS), has succeeded in developing a wearable and implantable device, that measures electrophysiological signals and applies electrical and thermal stimulations. It provides information on muscle and cardiac dysfunctions, and thus could be implemented for pain relief, rehabilitation, and prosthetic motor control. Being the first soft implant able to record the cardiac activity in multiple points of a swine heart, it is expected that this prototype, described in Nature Nanotechnology, will contribute to the research and production of future bioelectronics.

IBS researchers have used this new device on human skin to record the electrical activity of heart and muscles, that is electrocardiogram (ECG) and electromyogram (EMG) respectively. Thanks to its softness, elasticity and stretchability, it can follow the contours of flexible joints, such as the wrist. Worn on a forearm, it simultaneously monitored EMG signals, and delivered electrical and/or thermal stimulations that could be employed in therapeutic applications.

The research team has also produced a customized large mesh that fits the lower part of a swine heart. Wrapped around the heart, the implant can read signals from the entire organ to identify possible lesions and help recovery. For example, it was able to register the change of ECG signal caused by an acute heart attack. The mesh is stable during repetitive heart movements and does not interfere with the heart’s pumping activity.

The mesh implanted around a pig’s heart was able to record cardiac activity in multiple points. The electrocardiogram (ECG) produced by the device detected an abnormality (ST elevation) caused by an acute heart attack (ischemia). CREDIT Institute for Basic Science (IBS)

“Although various soft cardiac devices have been reported for the rat heart. This study on pigs can approximate human physiology more accurately,” says CHOI Suji, first co-author of the study. “We aim to study heart diseases, and stimulate the heart more effectively by synchronizing cardiac pumping activity.”

This stretchable and conductive patch is created by gold-coated silver nanowires mixed with a type of rubber, called polystyrene-butadiene-styrene (SBS). Conventional silver wire-based conductive rubbers have had limited biomedical applications because silver is toxic to the body. In this study, the gold sheath prevents both silver’s leaching, and corrosion caused by air and biological fluids, such as sweat.

“We took advantage of silver’s high conductivity, SBS’ stretchability, and gold’s high biocompatibility,” explains HYEON Taeghwan, director of the Center and corresponding co-author. “Finding the right proportion of each material was the key to success.”

Future research plans include maximizing conductivity and stretchability even further by designing novel, non-toxic materials, and studying the therapeutic effect of the mesh in cardiac diseases. 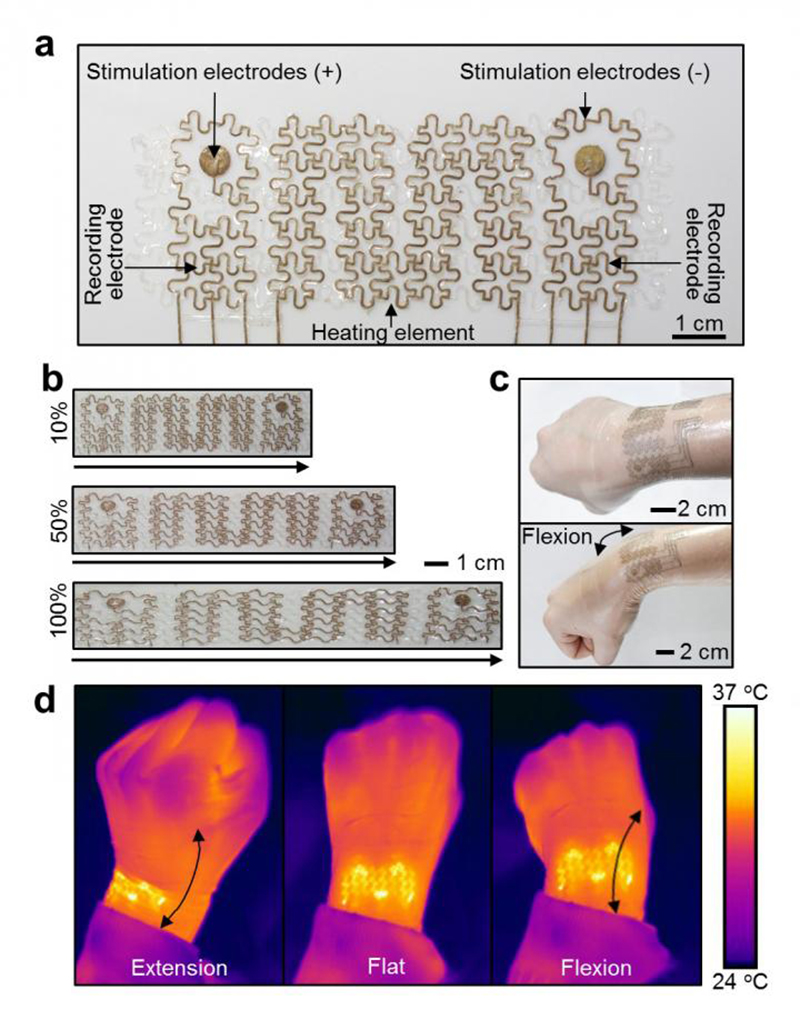 New wearable device capable of recording the electrical activity of the heart and muscles, as well as delivering therapeutic electrical and thermal stimulations. It is suitable for flexible joints, like the wrist, and allows reliable heat transfer even when the wrist is flexed or extended. CREDIT Institute for Basic Science (IBS)