After losing a leg to injury or disease, women adjusting to life with a prosthetic limb face the same challenges as men, with perhaps one added complication: how to wear high-heels?

A team of Johns Hopkins University students, working with a Johns Hopkins physician and outside prosthetics experts, has developed an early version of a potential solution. Called the “Prominence,” it would be the first prosthetic foot on the market that is not custom made that adapts to popular fashion for heels up to 4 inches high.

“High heels have become an integral part of the female lifestyle in modern society, permeating through all aspects of life – professional and social,” the five students who graduated earlier this month from the university’s Whiting School of Engineering wrote in their final project report. “For female veterans of the U.S. armed services with lower limb amputations, that seemingly innocuous, but so pervasive, and decidedly feminine part of their lives is gone.” 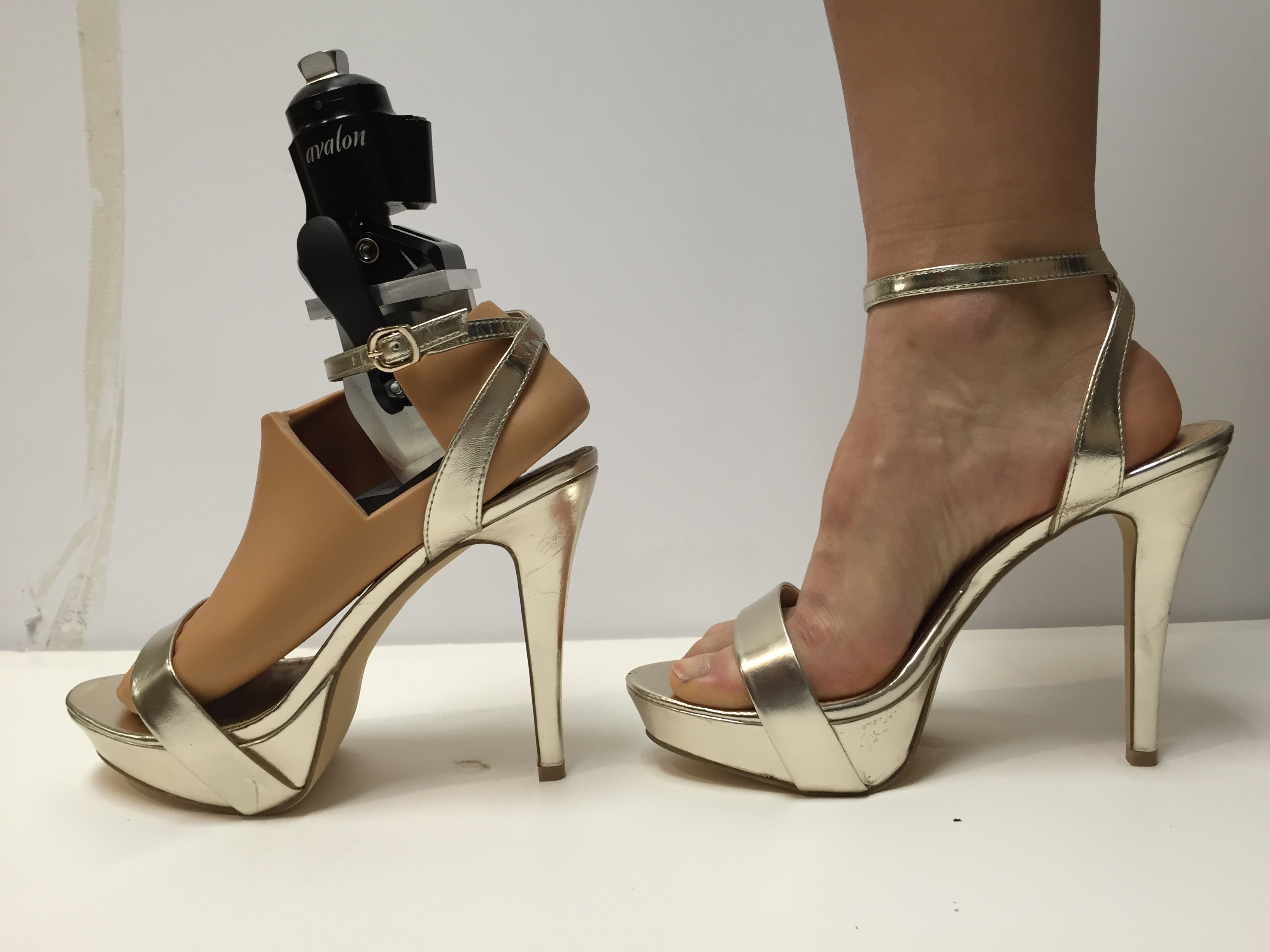 Scores of prosthetic feet are available on the market, but most are built to fit men’s shoes, and none can adjust to a heel more than 2 inches high. That’s less than the average women’s heel height in the United States.

With some 2,100 American women who lost a leg or foot in military service, and more women entering combat assignments, the demand for a prosthesis that accommodates women’s fashion footwear is sure to grow. The students – who created the Prominence as their final senior project in mechanical engineering – hope their work can help.

The challenge was daunting: create a foot that adjusts without a separate tool to a range of heel heights, holds position without slipping, supports up to 250 pounds, weighs less than 3 pounds and, of course, is slender enough to accommodate a woman’s shoe.

The human foot “took thousands of years of evolution to get this way; we have one year to match it,” team member Luke Brown said.

The students’ two semesters of work on the problem unfolded as a mix of mathematical calculations on paper and trial and error involving tests by machines and people. The students struggled to balance the foot’s strength and flexibility, reliability and convenience, sturdiness and lightness.

They tried a balloon in the heel to give it spring, or “energy return,” as engineers say. That didn’t work. They tried a mousetrap spring, but that didn’t work, either. They tried a sideways sandwich of 23 slender titanium plates to form the foot itself, but that was too heavy and not springy. A 20-layer carbon fiber footplate failed a stress test, but a 28-layer version worked, forming the base of the foot.

They built a heel-adjustment mechanism with two interlocking aluminum disks; it opens and closes with an attached lever at the ankle. For the ankle, they used an off-the-shelf hydraulic unit that enables a smooth gait and flexing at the sole.

Using four types of women’s shoes – including a gold 5 ½-half inch stiletto – the team had the foot tested by seven people. Three were amputees; four were non-amputees who attached the foot to the bottom of a bulky boot, a bit like walking on stilts.

Alexandra Capellini, a Johns Hopkins University junior who lost her right leg to bone cancer as a child, tried the foot with a flat shoe and liked it.

“I had a good time walking” with it, said Capellini, who majors in public health studies. “It felt stable. … An adjustable ankle is useful in contexts even beyond high heels. Ballet flats, sneakers, boots, and high heels especially, all vary in height, so an adjustable ankle opens up opportunities to wear a variety of shoes.”

One tester recommended a stiffer, longer toe. Another suggested moving the adjustment lever.

The design is still a work in progress. James K. Gilman, a physician and retired Army major general who is executive director of the Johns Hopkins Military and Veterans Health Institute and advisor to the students, said it will take time to assess the commercial appeal and potential of the Prominence, including the question of whether anything the team created could qualify for a patent.

“I think the final prototype produced showed the way forward,” said Nathan Scott, a senior lecturer in the Whiting School’s Department of Mechanical Engineering, who advised the student group. “As usual we just need to go around the design and prototyping loop one more time.”