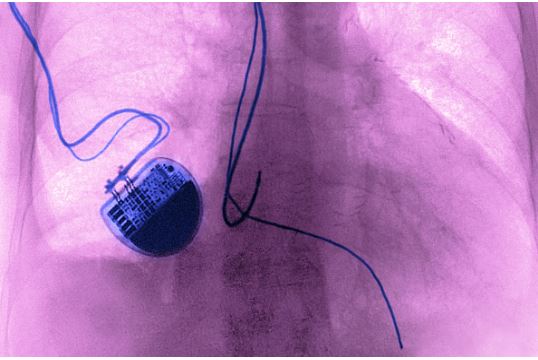 The MagnaSafe Registry, a multicenter study led by scientists at The Scripps Research Institute (TSRI), has demonstrated that appropriately screened and monitored patients with standard or non-MRI-conditional pacemakers and defibrillators can undergo MRI at a field strength of 1.5 tesla without harm.

These devices are not presently approved by the U.S. Food and Drug Administration (FDA) for MRI scanning.

The researchers observed no patient deaths, device or lead failures, losses of pacing function or ventricular arrhythmias in 1,500 patients who underwent MRI using a specific protocol for device interrogation, device programming, patient monitoring and follow-up designed to reduce the risk of patient harm from MRI effects.

The research will be published as an Original Article in the Feb. 23, 2017 issue of The New England Journal of Medicine.

The use of MRI poses potential safety concerns for patients with an implanted cardiac device.

These concerns are a result of the potential for magnetic field-induced cardiac lead heating, which could result in cardiac injury and damage to an implanted device. As a result, it has long been recommended that patients with a pacemaker or defibrillator not undergo MRI scanning, even when MRIs are considered the most appropriate diagnostic imaging method for their care.

Despite the development of devices designed to reduce the potential risks associated with MRI, a large number of patients have devices that have not been shown to meet these criteria and are considered “non-MRI-conditional.”

At least half these patients are predicted to have the need for MRI after a device has been implanted.

Researchers established the MagnaSafe Registry to determine the frequency of cardiac device-related events among patients with non-MRI-conditional devices, as well as to define a simplified protocol for screening, monitoring and device programming before MRI.

“Given the great clinical demand for MRI for patients with a standard pacemaker or defibrillator, we wanted to determine the risk,” says study leader Dr. Robert Russo, an adjunct professor at TSRI and director of The La Jolla Cardiovascular Research Institute.

In the MagnaSafe Registry, researchers at 19 U.S. institutions tested 1,000 cases with a non-MRI-conditional pacemaker (one not approved for use in an MRI) and 500 cases of patients with a non-MRI-conditional implantable cardioverter defibrillator (ICD), a device that can shock the heart in response to a potentially fatal cardiac rhythm. They scanned regions other than the chest, such as the brain, spine or extremities–where MRI is traditionally the best option for imaging.

The researchers tested the devices at an MRI field strength of 1.5 tesla, a standard strength for MRI scanners and reprogrammed some devices according to a prespecified protocol for the MRI examination.

“If the patient was not dependent upon their pacemaker, the device was turned off,” explains Russo. “If they could not tolerate having the device turned off, it was set to a pacing mode that did not sense cardiac activity. The reason was that the pacemaker could sense the electrical activity (radiofrequency energy) from the MRI scanner and the function of the device could be inhibited, which could be catastrophic if you depend upon your pacemaker for your heartbeat.”

Russo and his co-investigators did observe adverse effects in a small group of patients. Six patients had a brief period of atrial fibrillation, and in six additional cases pacemaker partial reset (a loss of stored patient information) was noted. But in no cases did the researchers observe device failure or a failure in the leads that connect the device to the heart when the protocol was followed.

“One ICD generator could not be interrogated after MRI and required immediate replacement; the device had not been appropriately programmed per protocol before the MRI,” explains Russo.

These findings led the researchers to conclude that “device removal and replacement seem unlikely to be safer than proceeding with scanning for patients with a pacemaker or an ICD who require a nonthoracic MRI,” provided a protocol similar to the MagnaSafe protocol was followed.

“Patients with a standard or non-MRI-conditional pacemaker can undergo clinically indicated MRI without harm if a protocol such as the ‘MagnaSafe’ protocol used in this study is followed and patients are screened and monitored as described,” says Russo.

The researchers also noted that their results may not be predictive of findings with all device and lead combinations, higher MRI field strengths, patients younger than 18 years of age and MRI examinations of the chest or cardiac resynchronization devices (those designed to increase the function of a failing heart).

The researchers plan to follow up by studying the risk for patients in need of a chest scan at scanner field strength of 1.5 tesla, as well as an MRI of any anatomic area at a higher field strength (3.0 tesla).