OrCam Technologies, a wearable artificial vision innovator for people who are partially sighted, blind, have reading difficulties or reading fatigue, will demo the newly-released, next generation OrCam MyEye 2.0 assistive technology device throughout CES 2018.

“Our mission is to empower people who are partially sighted, blind, and have reading difficulties, including dyslexia or those who experience reading fatigue, to study, work, and live their lives with a high degree of independence,” said Mr. Ziv Aviram, OrCam Co-founder, President and CEO.

Wireless and compacted into the size of a finger, OrCam MyEye 2.0’s assistive technology instantly reads printed and digital text aloud: newspapers, books, restaurant menus, signs, product labels, and computer and smartphone screens. It contains instant face recognition to improve social situations, and identifies consumer products, colors and money notes. This provides individuals with a sense of independence. The device is magnetically mounted on the wearer’s eyeglasses or sunglasses frame and weighs less than an ounce. The wearable is activated by an intuitive pointing gesture or simply by following the wearer’s gaze – allowing for hands-free use without the need of a smartphone or Wi-Fi.

According to the World Health Organization, over three percent of the world population is blind or visually impaired. A recent American Community Survey found that nearly 7.5 million Americans are affected by a visual disability. According to the National Institutes of Health’s National Eye Institute, the number of people with visual impairment or blindness in the United States is expected to double to more than 8 million by 2050. 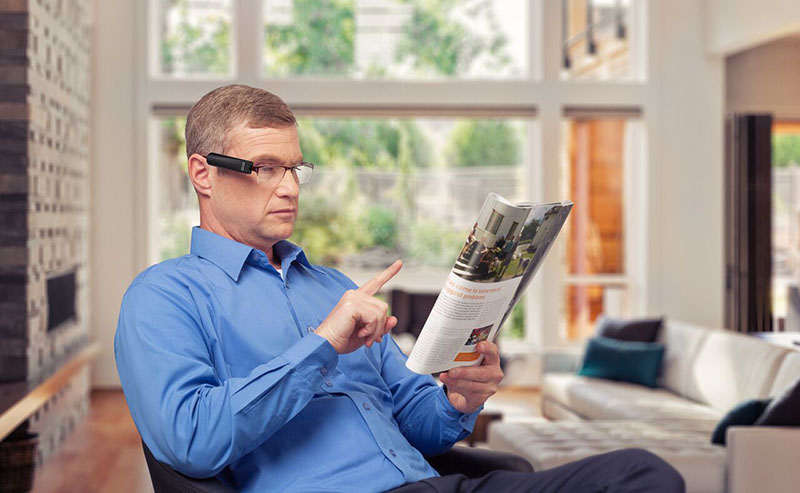