People sweat. A lot. Whether it’s walking through the heat of a late summer day or powering through the first mile of a run on a treadmill at the gym, everyone is bound to have moments when perspiration becomes a smelly factor. But what if that same sweat could detect how fatigued a person’s muscles are?

A team from CFD Research Corporation, a research group out of Huntsville, Alabama, have done just that by developing a sustainable, wearable sensor that can detect lactate levels through a person’s perspiration.

“When the human body undergoes strenuous exercise, there’s a point at which aerobic muscle function becomes anaerobic muscle function,” said Jenny Ulyanova, CFD Research Corporation (CFDRC) researcher. “At that point, lactate is produce at a faster rate than it is being consumed. When that happens, knowing what those levels are can be an indicator of potentially problematic conditions like muscle fatigue, stress, and dehydration.”

Collaborating with the University of New Mexico, CFDRC created an enzyme-based sensor powered by a biofuel cell with a fuel based on glucose, providing a renewable power source. This same enzymatic technology, where the enzymes oxidize the fuel and generate energy, is used at the working electrode of the sensor which allows for the detection of lactate in your sweat.

Biofuel cells are a promising method of energy storage, even though they have issues of short active lifetimes, low power densities, and low efficiency levels. However, on the flip side, they can use renewable fuels like glucose and implement affordable, renewable catalysts.

“The biofuel cell works in this particular case because the sensor is a low-power device,” Ulyanova said. “They’re very good at having high energy densities, but power densities are still a work in progress. But for low-power applications like this particular sensor, it works very well.” 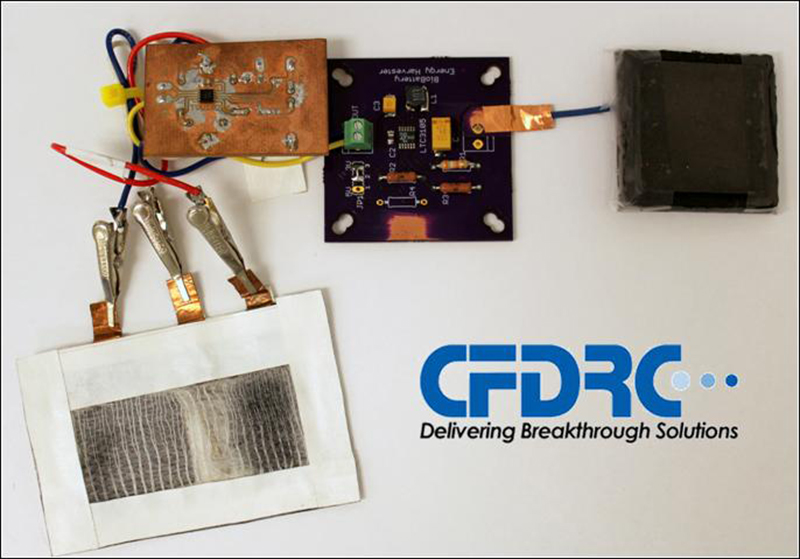 The team is still working on transitioning the sensor from laboratory research to on-body tests. To do this, they are redesigning the physical look of the patch, trying to optimize how the sensor sticks to the skin, its sweat sample delivery/removal, and the electronic components. Once all this is taken care of, volunteers will test the device while exercising.

“We had actually talked about this idea to some local high school football coaches,” Ulyanova said, “and they seem to really like it and are willing to put forth the use of their players to beta test the idea.”

After initial data is gathered, the team will be able to work with other groups to interpret the data and relate it to the physical condition of the person. With this, predictive models could be built to potentially help prevent conditions related to individual overexertion.

Researchers believe the device could be used as a training add to monitor lactate changes in the same way athletes use heart rate monitors to see how their heart rate changes during exercise.