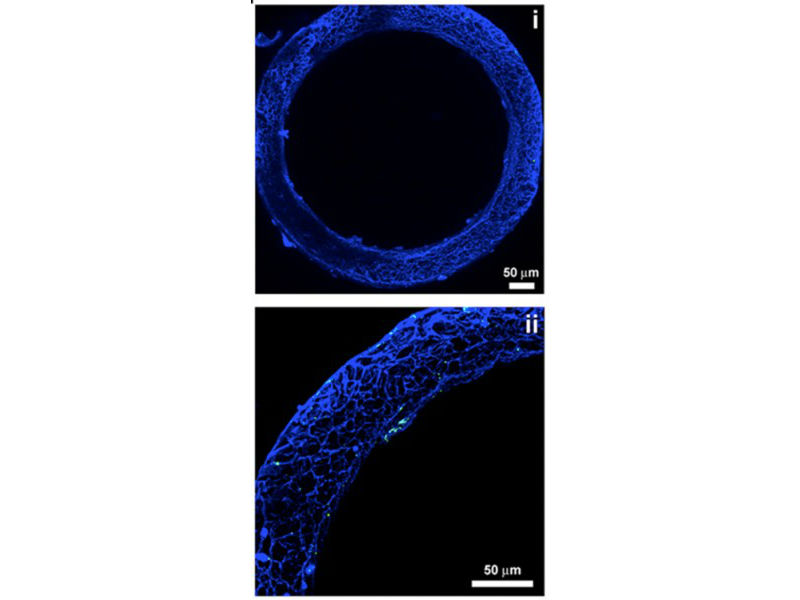 Researchers funded by the National Institute of Biomedical Imaging and Bioengineering at Tufts University and their collaborators have successfully developed a 3-dimensional (3D) tissue-engineered model of bone marrow that can produce functional human platelets outside the body (ex vivo).

Platelets, a key component of the blood that enables clotting, play an essential role in healing, and are generated by megakaryocytes in bone marrow. Bone marrow is a soft tissue found in spongy bone tissue. It is responsible for the formation of all peripheral blood cells. Failure to produce new bone marrow can be caused by disease, trauma, or some cancer treatments, and can lead to a significantly higher risk of infections, and the need for blood transfusions. Understanding and reproducing key features of bone marrow formation—and hence, the creation of blood cells and platelets in tissue culture for storage and later use—could help in treatment of a variety of medical problems.

The researchers worked to mimic the complex environment where megakaryocytes develop and mature into platelets. This environment includes endothelial cells (the cells lining the inside of blood vessels) and extracellular matrix (ECM) components, which provide structural support and signaling to surrounding cells. David Kaplan, Ph.D., professor and Director of the NIH P41 Resource Center on Tissue Engineering, Alessandra Balduini, M.D., and their collaborators have focused on forming bone marrow models with these components and other growth factors to imitate and support the formation of functional human platelets. 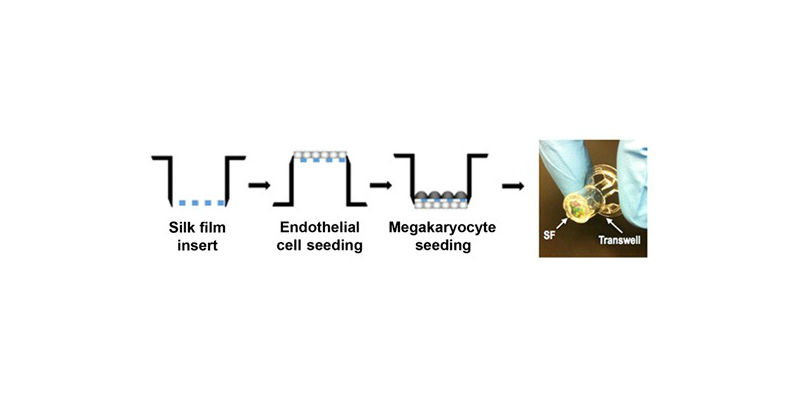 To begin, the researchers knew they would need a structure that could support endothelial cells, ECMs, and megakaryocytes, without adversely activating the cells or platelets. The team knew from their previous work with silk protein scaffolds that silk is a very biocompatible material that is amenable to many manipulations to customize it for a specific use, while also avoiding any cell-specific signaling. They formed silk scaffolds of different thicknesses (ranging from 2 to 5 micrometers) and stiffness combined with growth factors, to test the success of megakaryocyte adhesion and the formation of proplatelets—the parts of the megakaryocytes that fragment into platelets. When they determined the best combination of variables, the researchers attached the silk scaffolds to a plastic framework to guide the growth of cells.

Next, endothelial primary cells (EPCs) were grown on one side of the silk scaffold and megakaryocytes were seeded on the other side. EPCs are known to secrete growth factors that help megakaryocytes mature.

In order to mimic the production environment and microvasculature, the structures through which blood flows, the researchers formed silk sponges around porous silk microtubes. The wall thickness of the microtubes was kept below 10 micrometers, which helped proplatelets migrate through the walls and release platelets. By pumping culture media, a solution filled with necessary nutrients, through the microtubes, the researchers mimicked the flow of blood. These nutrients acted as growth factors which, in addition to the EPCs, allowed the resulting silk structure to support the formation of functioning platelets. 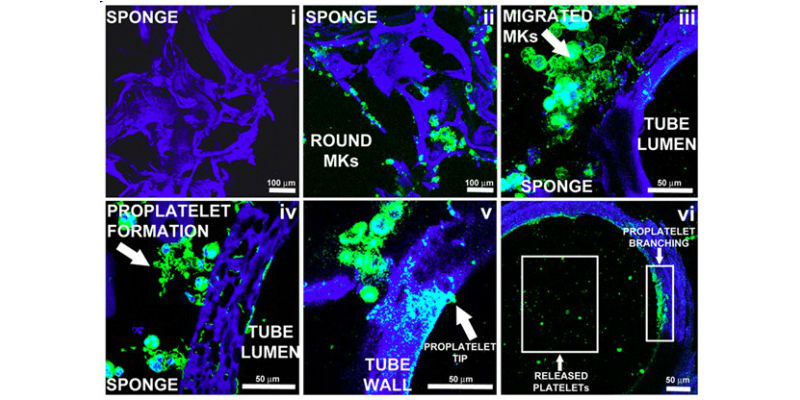 The image shows the microscopic analysis of the steps of the Mks inside the silk microtube-sponge tissue system as they generate platelets. (Credit: David Kaplan, Tufts University)

The unique features of this model lead to significantly higher numbers of platelets generated than was previously possible; and most importantly, the platelets were functional.

This is the first time researchers were able to create the complete microenvironment where platelets are formed. Each step of the tissue engineered silk bone marrow development furthered the amount of successful platelet production and allowed the researchers to use a minimal amount of resources while maximizing the output of functional platelets. It could help scientists further understand the process by which bone marrow creates platelets in order to test ways the process could be disrupted or restored. In addition, platelets generated ex vivo could be used to help healing in regenerative medicine, including recalcitrant ulcers and burns. The key feature is that the platelets are functional, thus, the system can be used for fundamental and applied studies of the bone marrow.

“This is an elegant example of how to deconstruct a complex process into its basic elements, and then build it back up, brick by brick, to give you a basic structure you need for the product you are looking for—in this case a human platelet made to order,” said Rosemarie Hunziker, PhD, program director of Tissue Engineering at NIBIB. “The key is to provide what is necessary and sufficient for the desired outcome. Then you can add other factors (structural complexity, more growth factors, other cell types, etc.) to improve the yields. Taking this incremental approach—adding to the structure one step at a time, this group is making great strides on the path to creating therapeutic quantities of platelets on demand.”