Anemia is easy to diagnose; it just takes a simple blood test. But in rural areas of developing countries, the challenge is reaching the potential patient.

With the help of 3D printing from 3D Systems, Dr. Mei He and graduate student Kimberly Plevniak of Kansas State University are developing a potential solution: A clear plastic chip that can capture a blood sample and be read by a smartphone to diagnose the presence of anemia.

A Widespread Problem
More than two billion people, approximately 30 percent of the world population, are anemic. Most of those affected are pregnant women and preschool children.

In a region such as Indonesia, where there are more than five million pregnant women and 76 million children distributed over 18,307 islands, it is difficult to travel to health centers or clinics for diagnosis. The answer in these remote regions of the world could be a point-of-care (POC) device that doesn’t require specialists for diagnosis.

“Anemia is a very prevalent condition in developing countries, even though it is easily treated with iron supplements or vitamins and can be prevented with a healthy diet,” Plevniak says. “Often in these developing countries people will have much easier access to smartphones than they will to doctors and trained medical professionals.” 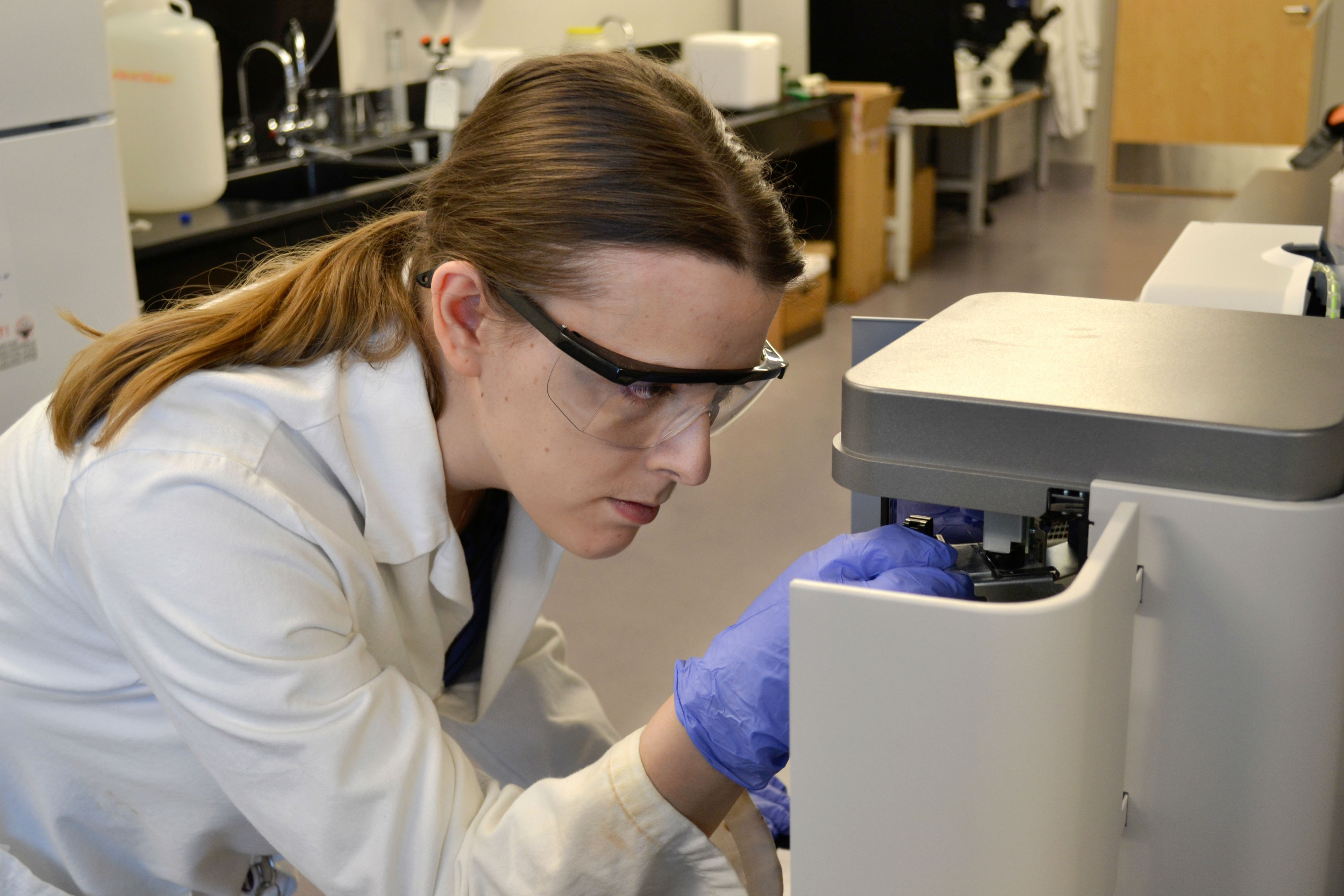 Microfluidics for POC
According to the National Institutes of Health (NIH), point-of-care devices are part of an overall movement that is shifting healthcare toward prevention and early detection of disease. This is especially significant in developing countries with highly isolated populations and lack of modern transportation options.

Microfluidics—the ability to manipulate fluids on a small, typically sub-millimeter, scale—is often critical to POC development. Microfluidic devices enable blood testing on a microchip or small slide, making them less expensive to manufacture and ship, and in the case of smartphone-based devices, easier to use by those without medical training.

The Kansas State prototype device is a clear plastic chip to which the user adds a blood sample. Test results are produced in less than 60 seconds for subsequent scanning by a smartphone.

Faster, Cheaper Prototyping
Prototyping a POC microfluidic device is typically costly and complex. It involves a series of fabrication steps using materials such as polydimethylsiloxane (PDMS) polymer and glass. The process requires a special facility, expensive equipment and multiple manual interventions. Costs typically run several hundreds of dollars and the process takes a day or two.

“For most POC devices, micro-fabrication with specialized techniques and infrastructure is needed in a scientific laboratory setting,” says Dr. He.

But 3D printing is changing that scenario. Prototyping a microfluidic device can be done on a lower-end 3D printer with readily available material in a matter of an hour by an operator with basic training.

“You are looking at about one to two days to produce a PDMS mold and chips versus about an hour to create a prototype with 3D printing,” says Dr. He. “The 3D printer does not require much training to operate. If you look at all the qualities of 3D printing—fast, one-step process, easy to use—it is perfect for this type of prototyping.”

Selecting the Right Printer
Plevniak and Dr. He worked with D3 Technologies, a design and engineering systems integrator and 3D Systems partner based in Springfield, Missouri, to select the best 3D printer, material and print set-up for their needs. 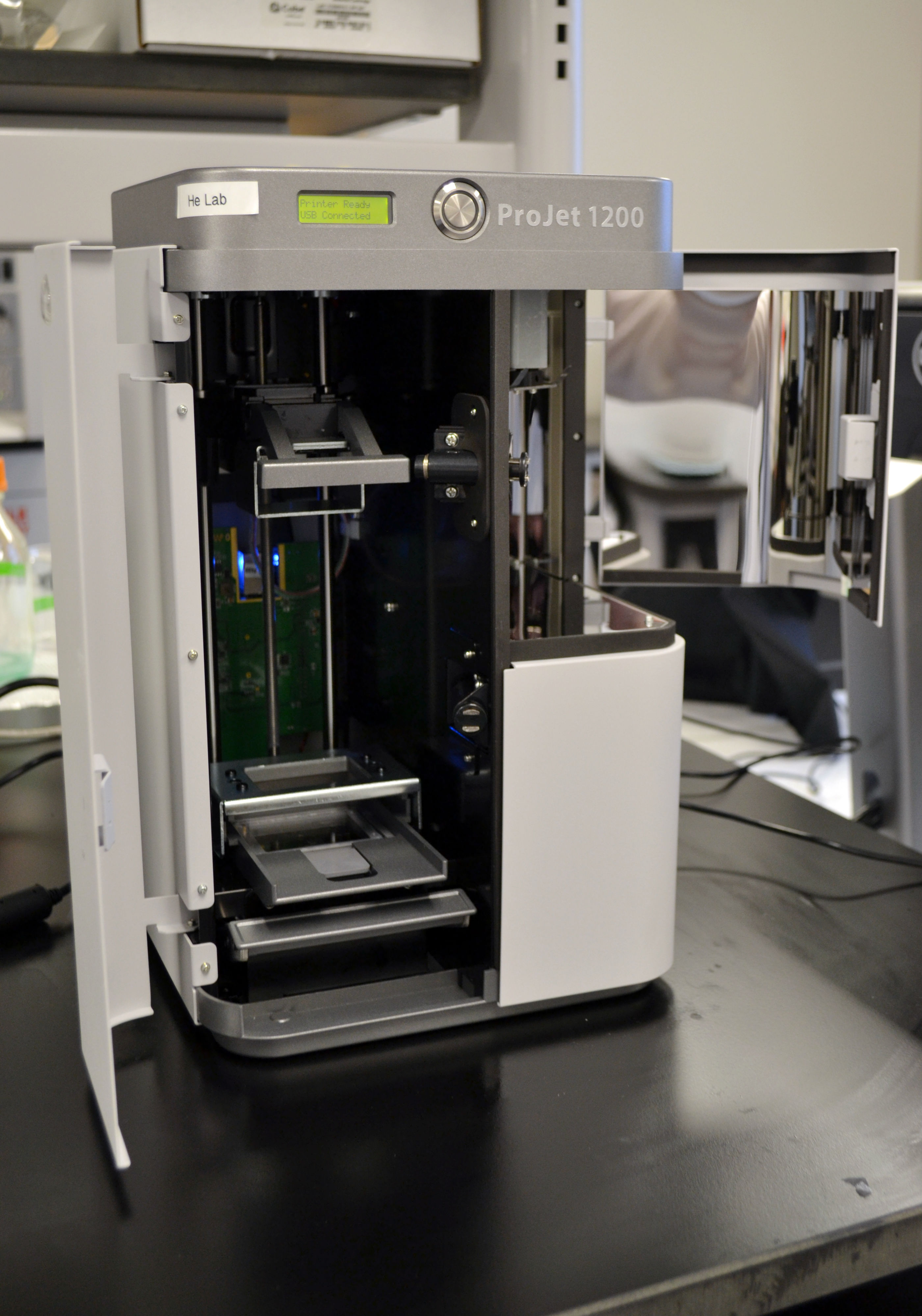 “We received a lot of support from D3 before we made the decision to purchase the 3D Systems ProJet 1200,” says Plevniak. “We were able to ask a lot of questions before ordering and D3 brought us over a sample of the clear material so we could see and test it. D3 also set up a tour of a customer site so we could see the ProJet 1200 in action.”

The 3D Systems ProJet 1200 is the perfect match for microfluidic device prototyping. It is designed for small, precise, detail-rich parts and casting patterns. The machine has a small footprint and is economical to own, safe to operate anywhere, and simple to use.

Prototyping without Worry
“We selected the ProJet 1200 for this project due to its high- quality resolution, material choices and reasonable pricing,” says Plevniak. “Having fine detail is important when printing very small microfluidic channels. The ProJet 1200 can print VisiJet FTX Clear material, a UV-curable plastic that provides the optical transparency we need in the microfluidic channels of our device.”

“I like the way the material cartridges are loaded into the printer,” she says. “It makes production so much easier and less messy. Other 3D printers use pumps instead of cartridges; those get way too messy and break down easily. The ProJet 1200 allows us to focus on production of our chips without having to worry about the printer breaking down or cleanup after each print.”

Broad Implications Worldwide
The POC prototype is currently being tested using blood samples from the University of Kansas Medical Center Biospecimen Repository. Test results will be used to further optimize the device for diagnosing different levels of anemia in the blood. An invention disclosure has been filed with the Kansas State University Research Foundation, a non-profit corporation responsible for managing technology transfer activities.

Dr. He and Plevniak are working with a colleague at Kansas State to develop a companion app for the anemia POC chip that could manage data from the blood sample and send results to medical professionals.

Dr. He thinks that the Kansas State anemia-detection approach could have broad implications throughout the world.

“This device offers an adaptive diagnostic strategy that is truly transferable to low-income countries to improve healthcare quality.”