In adults, certain regions of the brain’s visual cortex respond preferentially to specific types of input, such as faces or objects — but how and when those preferences arise has long puzzled neuroscientists.

One way to help answer that question is to study the brains of very young infants and compare them to adult brains. However, scanning the brains of awake babies in an MRI machine has proven difficult.

Now, neuroscientists at MIT have overcome that obstacle, adapting their MRI scanner to make it easier to scan infants’ brains as the babies watch movies featuring different types of visual input. Using these data, the team found that in some ways, the organization of infants’ brains is surprisingly similar to that of adults. Specifically, brain regions that respond to faces in adults do the same in babies, as do regions that respond to scenes.

Neuroscientists at MIT have adapted their MRI scanner to make it easier to scan infants’ brains as the babies watch movies featuring different types of visual input. With the new technique, the team found that in some ways, the organization of infants’ brains is surprisingly similar to that of adults. Specifically, brain regions that respond to faces in adults do the same in babies, as do regions that respond to scenes.(Credit: MIT)

“It suggests that there’s a stronger biological predisposition than I would have guessed for specific cortical regions to end up with specific functions,” says Rebecca Saxe, a professor of brain and cognitive sciences and member of MIT’s McGovern Institute for Brain Research.

Saxe is the senior author of the study, which appears in the Jan. 10 issue of Nature Communications. The paper’s lead author is former MIT graduate student Ben Deen, who is now a postdoc at Rockefeller University.

Functional MRI (magnetic resonance imaging) is the go-to technique for studying brain function in adults. However, very few researchers have taken on the challenge of trying to scan babies’ brains, especially while they are awake.

“Babies and MRI machines have very different needs,” Saxe points out. “Babies would like to do activities for two or three minutes and then move on. They would like to be sitting in a comfortable position, and in charge of what they’re looking at.”

On the other hand, “MRI machines would like to be loud and dark and have a person show up on schedule, stay still for the entire time, pay attention to one thing for two hours, and follow instructions closely,” she says.

To make the setup more comfortable for babies, the researchers made several modifications to the MRI machine and to their usual experimental protocols. First, they built a special coil (part of the MRI scanner that acts as a radio antenna) that allows the baby to recline in a seat similar to a car seat. A mirror in front of the baby’s face allows him or her to watch videos, and there is space in the machine for a parent or one of the researchers to sit with the baby.

The researchers also made the scanner much less noisy than a typical MRI machine. “It’s quieter than a loud restaurant,” Saxe says. “The baby can hear their parent talking over the sound of the scanner.”

“The sheer tenacity of this work is truly amazing,” says Charles Nelson, a professor of pediatrics at Boston Children’s Hospital, who was not involved in the research. “The fact that they pulled this off is incredibly novel.”

Obtaining this data allowed the MIT team to study how infants’ brains respond to specific types of sensory input, and to compare their responses with those of adults.

“The big-picture question is, how does the adult brain come to have the structure and function that you see in adulthood? How does it get like that?” Saxe says. “A lot of the answer to that question will depend on having the tools to be able to see the baby brain in action. The more we can see, the more we can ask that kind of question.” 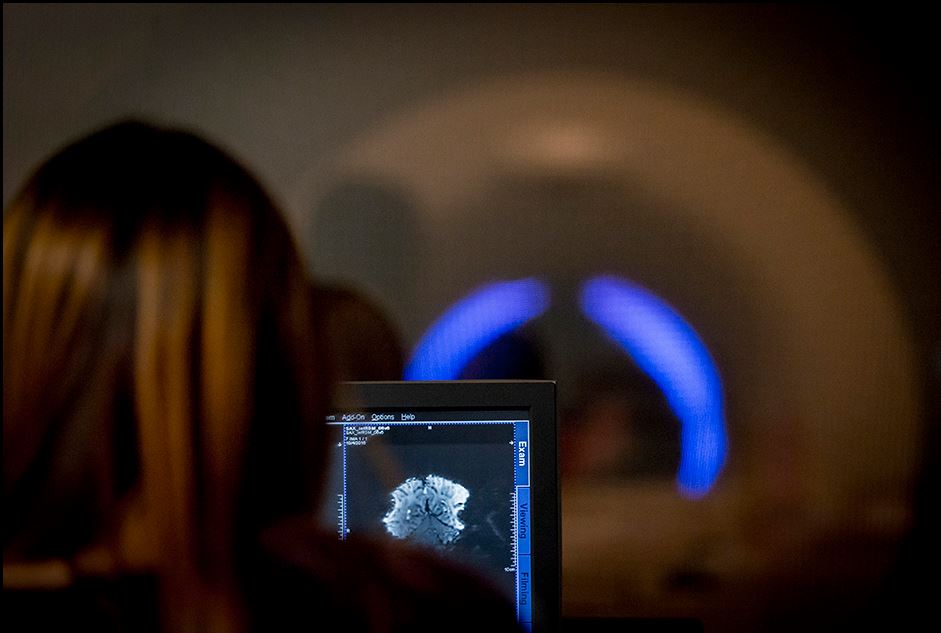 The researchers showed the babies videos of either smiling children or outdoor scenes such as a suburban street seen from a moving car. Distinguishing social scenes from the physical environment is one of the main high-level divisions that our brains make when interpreting the world.

The scans revealed that many regions of the babies’ visual cortex showed the same preferences for scenes or faces seen in adult brains. This suggests that these preferences form within the first few months of life and refutes the hypothesis that it takes years of experience interpreting the world for the brain to develop the responses that it shows in adulthood.

The researchers also found some differences in the way that babies’ brains respond to visual stimuli. One is that they do not seem to have regions found in the adult brain that are “highly selective,” meaning these regions prefer features such as human faces over any other kind of input, including human bodies or the faces of other animals. The babies also showed some differences in their responses when shown examples from four different categories — not just faces and scenes but also bodies and objects.

“We believe that the adult-like organization of infant visual cortex provides a scaffolding that guides the subsequent refinement of responses via experience, ultimately leading to the strongly specialized regions observed in adults,” Deen says.

Saxe and colleagues now hope to try to scan more babies between the ages of 3 and 8 months so they can get a better idea of how these vision-processing regions change over the first several months of life. They also hope to study even younger babies to help them discover when these distinctive brain responses first appear.