If you give a toy to a baby, she might investigate its properties by squeezing, throwing or chewing it. Scientists can similarly investigate the properties of materials by applying different forces, albeit in a much more controlled way.

Researchers have recently developed a new and improved way to controllably manipulate materials, in this case biomolecules that are far too small to see with the naked eye. By stretching molecules like DNA and proteins, scientists can find out important information about the structure, chemical bonding and mechanical properties of the individual molecules that make up our bodies. This understanding could shed light on diseases like cancer and amyotrophic lateral sclerosis (ALS). 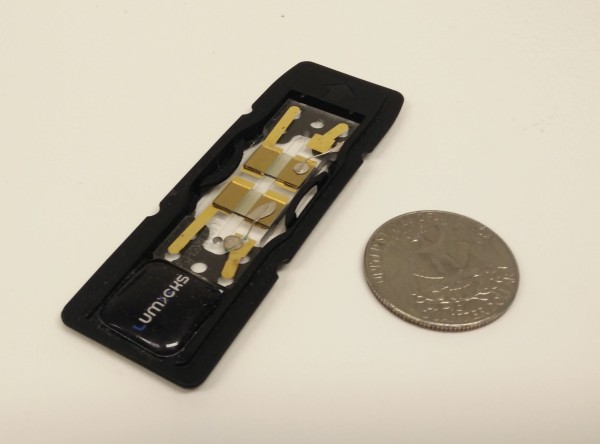 The new technique is called acoustic force spectroscopy (AFS). The research team first described AFS in a 2015 Nature-Methods paper and have since then upgraded it so that it is compatible with more imaging techniques, can produce a stronger stretching force, and can stretch from a designated distance. The researchers dubbed the upgrade AFS 2.0 and they will present it at the annual meeting of the Biophysical Society, held Feb. 27 – March 1 in Los Angeles, Calif.

“AFS is a new and promising technique that still has some tricks up his sleeve,” said Douwe Kamsma, a graduate student in biophysics at the VU University in Amsterdam who was an author on the first AFS paper and is currently working on AFS 2.0.

AFS works by using sound waves to generate forces in a fluid channel. The fluidic channel is located in a glass slide and a piezo element is glued on top of the slide. The sound waves are produced by the piezo element, which vibrates in response to an applied alternating voltage. Researchers can tune the frequency to bring the system in resonance and make a standing wave. A standing wave is a wave in which specific points, called nodes, appear to be standing still.

To stretch DNA or other molecules, the researchers tether one end to the surface of the fluid channel and attach the other end to a microsphere. When the piezo element is turned on to create a standing wave in the fluid layer, the microspheres are forced toward the nodes of the standing waves. The selected resonance frequency of the wave determines the direction of the force and the amplitude determines the strength of the force. Researchers can change these two parameters almost instantaneously to manipulate the microspheres, and hence tug the DNA with varying degrees of force.

“The big advantage of AFS is that we can coat the whole surface with these tethered constructs and so measure thousands of single biomolecules in parallel,” Kamsma said.

AFS 1.0 has already been commercialized by LUMICKS, which is a spinoff company from the VU University lab where Kamsma works. To upgrade the product to AFS 2.0, the researchers integrated an optically transparent piezo element, which would not block the view of the channel, and demonstrated that the AFS chip was compatible with a wide range of microscopes.

They also developed a model to optimize the thicknesses of the different system layers, making it possible to apply higher forces. Finally, they demonstrated a fast and easy method to quantify the force profile within the fluid layer, and showed that the AFS system could be used to stretch molecules by manipulating the distance of the attachments points of the biomolecule, a function called a distance clamp.

A distance clamp is better than a force clamp in probing multiple rupture events on the same molecule, Kamsma said. This could be used, for example, to study the overstretching of DNA as well as protein unfolding, he said.

“AFS is a very good example where the instruments and techniques that are developed by physicists are used to study cells and biomolecules,” Kamsma said. To make the system work required knowledge from fluid dynamics, software development, manufacturing and molecular biology. “Bringing all this together is very exciting,” he said. Most of the technical challenges of developing the new tool have been overcome, so “now is the time to apply it to very exciting biomolecular problems.”