Only 20 to 30 percent of donated medical equipment donated to emerging economies is ever utilized, according to a report from the World Health Organization (WHO) .

Tim Prestero, CEO of Design That Matters, a non-profit organization that created the Otter Newborn Warmer, observes healthcare professionals are either uninterested or untrained in how to use them. 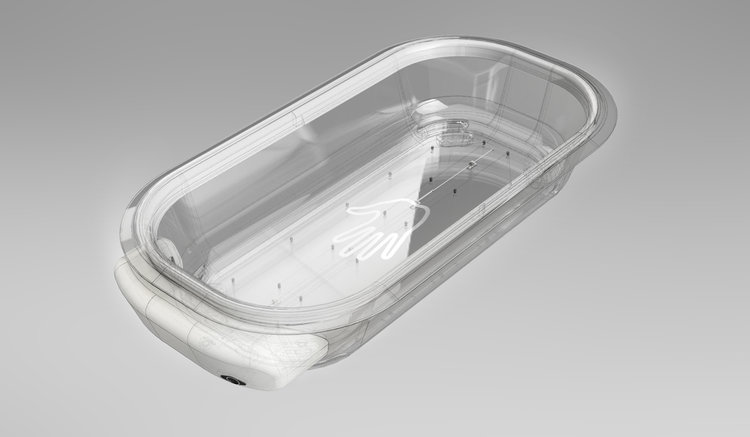 The Otter Newborn Warmer is a bassinet designed to keep newborn babies warm. The team created the device with the “easy-to-use” factor in mind in hopes that it would be used.

At the beginning of the design process, the team settled on a computer-aided design (CAD) model. A clear polycarbonate (PC) material is used for the bassinet. This material allows for a seamless design, important for preventing bacteria from living in the warm crevices of the bassinet.

A thermoforming machine melts the PC material to make it flexible, enabling it to conform to the mold. The melted PC is then laid over the mold and a vacuum pulls the PC sheet into place. The bassinet is then cooled and removed from the machine, and the edges are trimmed.

Next, the electrical components are hot glued to the bassinet. The team used an Arduino circuit board, but some boards are custom-made for the device. In addition, Nicro heating powered by a 24-volt relay switch using pulse width modulation (PWM) and nichrome heating wire are used.

To warm the bassinet, the Otter Newborn Warmer prototype, “is currently driven by a standard AC power supply,” says Prestero. “Thermocouples inside the bassinet send temperature measurements to an Arduino microcontroller, which in turn sets the power to the nichrome heater wires using a relay switch. This robust and inexpensive system has a fast response time.”

All of the electrical components are kept in 3D-printed electronic housing, printed with automatic document feeder (ADF) ink. The housing is glued to the side of the bassinet, and it is finished.

To sterilize the bassinet, it can be quickly rinsed with alcohol between patients.

The Design That Matters team has implemented its work in 22 countries. Recently, the team made a stop in Vietnam where they followed up on one of its other projects, Firefly, and tested the bassinet.

“After a series of late nights and endless hours sawing, sanding, and soldering, the team finished the Otter alpha prototype. It’s a huge step forward for our newborn warmer program,” according to a statement from Design That Matters.

“We’re excited to continue Otter development this fall with a student design-for-manufacture team at Olin College and to begin field-testing the device overseas later this year.”