In a continuing effort to improve patient safety, Beaufort Memorial Hospital has invested in a high-tech portable disinfection robot capable of wiping out deadly superbugs in just minutes.

“This is a powerful added weapon in our arsenal of cleaning agents to assist in preventing infections by destroying the microorganisms that cause them,” said BMH Infection Control Manager Mary Scott. 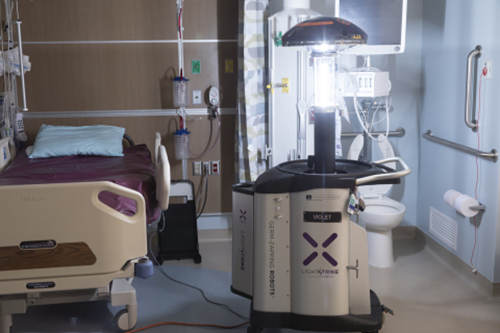 More than a dozen medical facilities, including the prestigious MD Anderson Cancer Center, have published peer-reviewed studiesproviding evidence of the robot’s effectiveness. To date, Beaufort Memorial is the only hospital in the coastal region of South Carolina to employ the cutting-edge technology in its battle against superbugs. Worldwide, more than 400 hospitals, long-term acute care, outpatient surgery and skilled nursing facilities use Xenex’s pulsed xenon UV light technology to destroy deadly superbugs before they harm patients and hospital employees.

Although significant progress has been made in preventing some infection types, hospital-acquired infections (HAIs) continue to be a major threat to patient safety nationwide. According to the Centers for Disease Control and Prevention, approximately 1.7 million HAIs occur in U.S. hospitals each year, resulting in 99,000 deaths.

BMH began using the robot late last month as part of its usual cleaning process. After a patient room has been wiped down with disinfectant, a trained environmental services technician wheels in the robot and sets it to work zapping germs in the bathroom and both sides of the hospital bed.

The pulsed xenon lamps in the robot produce a flash of germicidal light in millisecond pulses, damaging the cell structure and stopping the DNA repair mechanism for most pathogens in less than five minutes.

Initially, the hospital is targeting areas where patients are especially vulnerable to bacteria, including isolation rooms, equipment rooms and the OR.

“Nurses and staff can put their cell phones, badges, stethoscopes and other personal items in the room to disinfect them as well,” Scott said. “By controlling the germs in the worst places, we hope to reduce the bioburden in the entire hospital.”