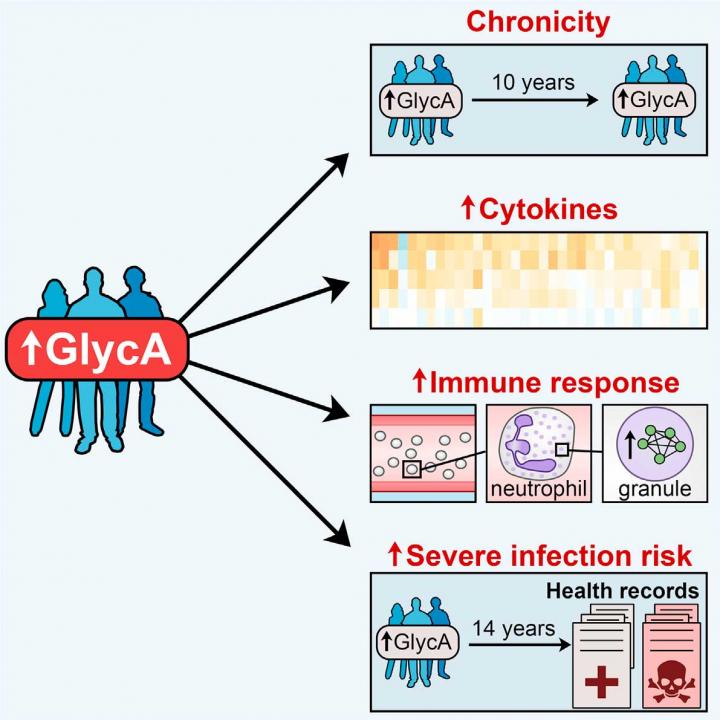 This schematic summarizes an investigation of the biology of GlycA, a known biomarker for short-term mortality. They reveal GlycA’s long-term behavior in apparently healthy patients: it is stable for >10 years and associated with chronic low-grade inflammation. Accordingly, GlycA predicts death from infection up to 14 years in the future. (Credit: Ritchie et al./Cell Systems 2015)

A single blood test could reveal whether an otherwise healthy person is unusually likely to die of pneumonia or sepsis within the next 14 years. Based on an analysis of 10,000 individuals, researchers have identified a molecular byproduct of inflammation, called GlycA, which seems to predict premature death due to infections.

The findings, published October 22 in Cell Systems, suggest that high GlycA levels in the blood indicate a state of chronic inflammation that may arise from low-level chronic infection or an overactive immune response. That inflammation damages the body, which likely renders individuals more susceptible to severe infections.

“As biomedical researchers, we want to help people, and there are few more important things I can think of than identifying apparently healthy individuals who might actually be at increased risk of disease and death,” said co-senior author Michael Inouye, of the University of Melbourne, in Australia. “We want to short-circuit that risk, and to do that we need to understand what this blood biomarker of disease risk is actually telling us.”

Inouye and his colleagues note that additional studies are needed to uncover the mechanisms involved in GlycA’s link to inflammation and premature death, and whether testing for GlycA levels in the clinic might someday be warranted.

“We still have a lot of work ahead to understand if we can modify the risk in some way,” said co-senior author Johannes Kettunen, of the University of Oulu and the National Institute for Health and Welfare, in Finland. “I personally would not want to know I was at elevated risk of death or disease due to this marker if there was nothing that could be done about it.”

For example, to plan a course of treatment, researchers need to know whether high GlycA is the result of a chronic, low-level microbial infection or an aberrant reaction of the body’s own inflammatory response.

The findings will likely form the foundation for numerous other studies that will investigate the role of GlycA in the body. “The more high-quality genomics data we have, linked health records and long-term follow-up, the better our models and predictions will be,” Inouye says. “This study is an example of the progress that can be made when altruistic research volunteers, clinicians, technologists, and data scientists work together, but we have the potential to do much more, and large-scale strategic inter-disciplinary initiatives are vitally needed.”