The fabrication of a prototype tissue having functional properties close to the natural ones is crucial for effective transplantation. Tissue engineering scaffolds are typically used as supports which allow cells to form tissue-like structures essentially required for the correct functioning of the cells under the conditions close to the three-dimensional tissue. 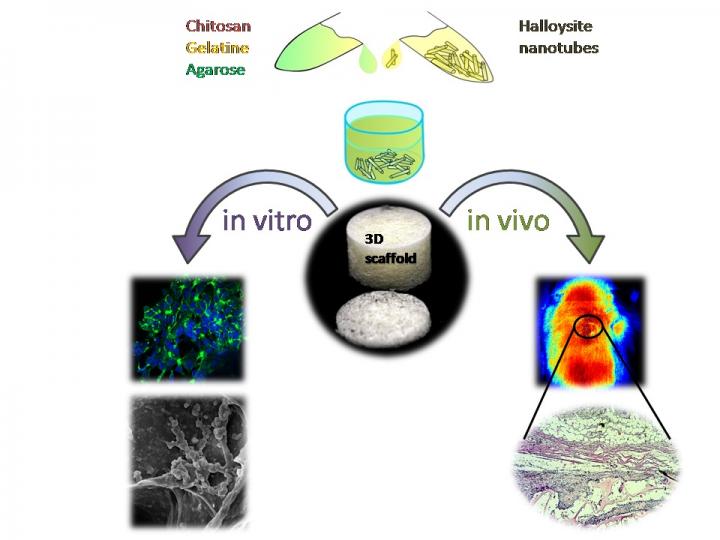 Chitosan, a natural biodegradable and chemically versatile biopolymer, has been effectively used in antibacterial, antifungal, anti-tumor and immunostimulating formulations. To overcome the disadvantages of pure chitosan scaffolds such as mechanical fragility and low biological resistance, chitosan scaffolds are typically doped with other supporting compounds which allow for mechanical strengthening, thus yielding composite biologically resistant scaffolds.

Agarose is a galactose-based backbone polysaccharide isolated from red algae, having remarkable mechanical properties which are useful in the design of tissue engineering scaffolds.

Gelatine is formed from collagen by hydrolysis (breaking the triple-helix structure into single-strand molecules) and has a number of advantages over its precursor. It is less immunogenic compared with collagen and it retains informational signal sequences promoting cell adhesion, migration, differentiation and proliferation.

The surface irregularities of the scaffold pores due to the insoluble nanosized components promote the best adhesion of the cells on scaffold materials, while the nanoparticle fillers increase the composites’ strength. Thus, researchers doped halloysite nanotubes into a chitosan-agarose-gelatine matrix to design the implantable 3D cell scaffolds.

The resulting scaffolds demonstrate the shape memory upon deformation and have the porous structure suitable for cell adhesion and proliferation which is essential for artificial tissue fabrication. Macroscopic observations have confirmed that all the samples of scaffolds exhibited the sponge-like behaviour with the shape memory and shape reconstitution after deformation both in wet and dry states.

The swelling experiments indicated that the addition of halloysite can greatly improve the hydrophilicity and wetting of composite scaffolds. The incorporation of halloysite nanotubes into the scaffolds increases the water uptake and subsequently improves the biocompatibility. The intrinsic properties of halloysite nanotubes can be used for further improving the biocompatibility of scaffolds by the loading and sustained release of different bioactive compounds. This opens the prospect for fabrication of scaffolds with defined properties for directed differentiation of cells on matrixes due to gradual release of differentiation factors.

Experiments on two types of human cancer cells (A549 and Hep3B) show that in vitro cell adhesion and proliferation on the nanocomposites occur without changes in viability and cytoskeleton formation.

Further in vivo biocompatibility and biodegradability evaluation in rats has confirmed that the scaffolds promote the formation of novel blood vessels around the implantation sites. The scaffolds show excellent resorption within six weeks after implantation in rats. Neo-vascularization observed in newly formed connective tissue placed near the scaffold allows for the complete restoration of blood flow.

The results obtained indicate that the halloysite doped scaffolds are biocompatible as demonstrated both in vitro and in vivo. In addition, they confirm the great potential of chitosan-agarose-gelatine nanocomposite porous scaffolds doped with halloysite in tissue engineering with potential for sustained nanotube drug delivery.