Using the results from a computerized mathematical model, Johns Hopkins researchers investigated whether they could improve heart and lung transplantation procedures by transferring patients from low-volume to high-volume transplant centers.

Investigators have long observed a positive relationship between a high operative volume and improved patient outcomes across a variety of surgical procedures, meaning that the more times a medical center does a particular surgery, the better its patients do overall. The new study, published in the American Journal of Transplantation on September 12, was the first to investigate this trend for heart and lung transplant patients on a national level, the Johns Hopkins team says. “The reason we did the simulation is because there is a lot of uncertainty in predicting post-transplantation outcomes,” says Trent Magruder, M.D., a surgery resident and fellow in the Division of Cardiac Surgery at the Johns Hopkins University School of Medicine. “We hope our model will help illuminate areas for improvement and bring better and more predictable outcomes to doctors and patients.” 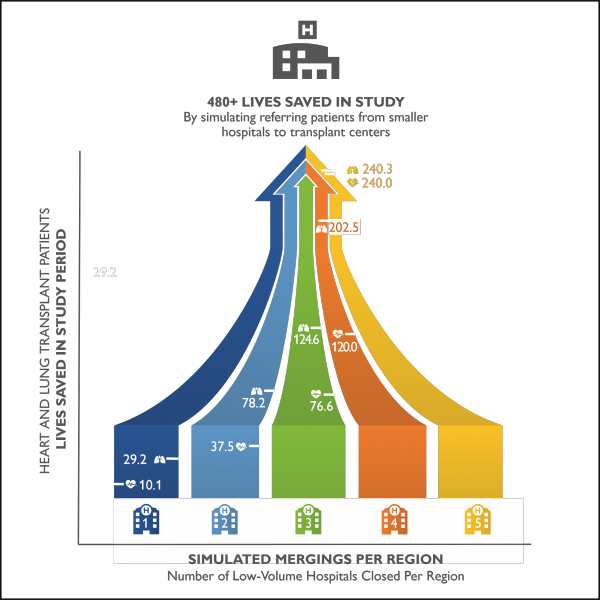 Researchers used a simulation to transfer patients from low-volume to high-volume transplant centers as a way to show that standardized care from the high-volume centers can save lives. (Credit: Johns Hopkins Medicine)

The algorithm divided the continental United States into 11 regions, as defined by the United Network for Organ Sharing, which controls the allocation of donor organs, and began figuratively “closing” the center with the lowest number of transplants per year in each region. The algorithm essentially referred all patients from the “closed” low-volume center to the largest one in that region and assigned those patients the largest center’s reported mortality rate. This process was repeated until either five centers had been closed or only one transplant center in a given region was left.

“The goal of this study is not to say we need to close small centers,” says Christian Merlo, M.D., M.P.H., associate professor of medicine at Johns Hopkins. “We used this algorithm as a tool to see if we can limit some of the heterogeneity between centers and find out if this improves outcomes for our patients. It is food for thought that we hope will spark conversation among our colleagues about the need for a set of best practices and ways to share that information across centers,” he adds.

While other countries, like the U.K., have nationalized, single-payer health care, a similar system may not be practical in the U.S. because of its size. For example, patients’ average travel distances for heart and lung transplantation exceed 300 miles in parts of the Pacific Northwest, and center closure would undoubtedly increase these distances. As such, regionalization could limit access to care to those who can’t afford to travel, in addition to the cost of the procedure. The authors emphasize that their algorithm, for the time being, can’t quantify the socioeconomic costs regionalization of care would create.

The researchers say that the next steps will include studying the best performing centers to see what they are doing differently from smaller centers to save more lives. Using this information, transplant physicians and surgeons can develop guidelines for best practices to share across the country. “The limitation of this study is that it is a black box,” says Magruder. “I can tell you that this algorithm appears to save lives, but I can’t tell you what the high-volume centers are doing, which makes more detailed research an important next step.”

In this year alone, 16,000 transplants have been performed in the U.S. Of those, 1,577 have been heart, 1,199 have been lung, and four have been heart and lung. However, all transplant patients can benefit from the improved care and collaboration across institutions that the researchers in this study wish to bring about.

The authors of this manuscript have no conflicts of interest to disclose as described by the American Journal of Transplantation.