Things that happen on the surface are often given short shrift compared to what goes on inside. But when it comes to chemical reactions, what occurs on the surface can mean the difference between a working material and one that refuses to perform its duty.

Tao Wei, an assistant professor of Chemical Engineering at Lamar University, studies surface — also known as “interfacial” — phenomena as a way to develop and improve functional materials and bio-nano technologies.

By understanding the atomic and quantum mechanisms of interfacial physics and chemistry, he is helping to develop biosensors that can speed up drug development, design better materials for desalinization, and create new ways of generating energy from bacteria. 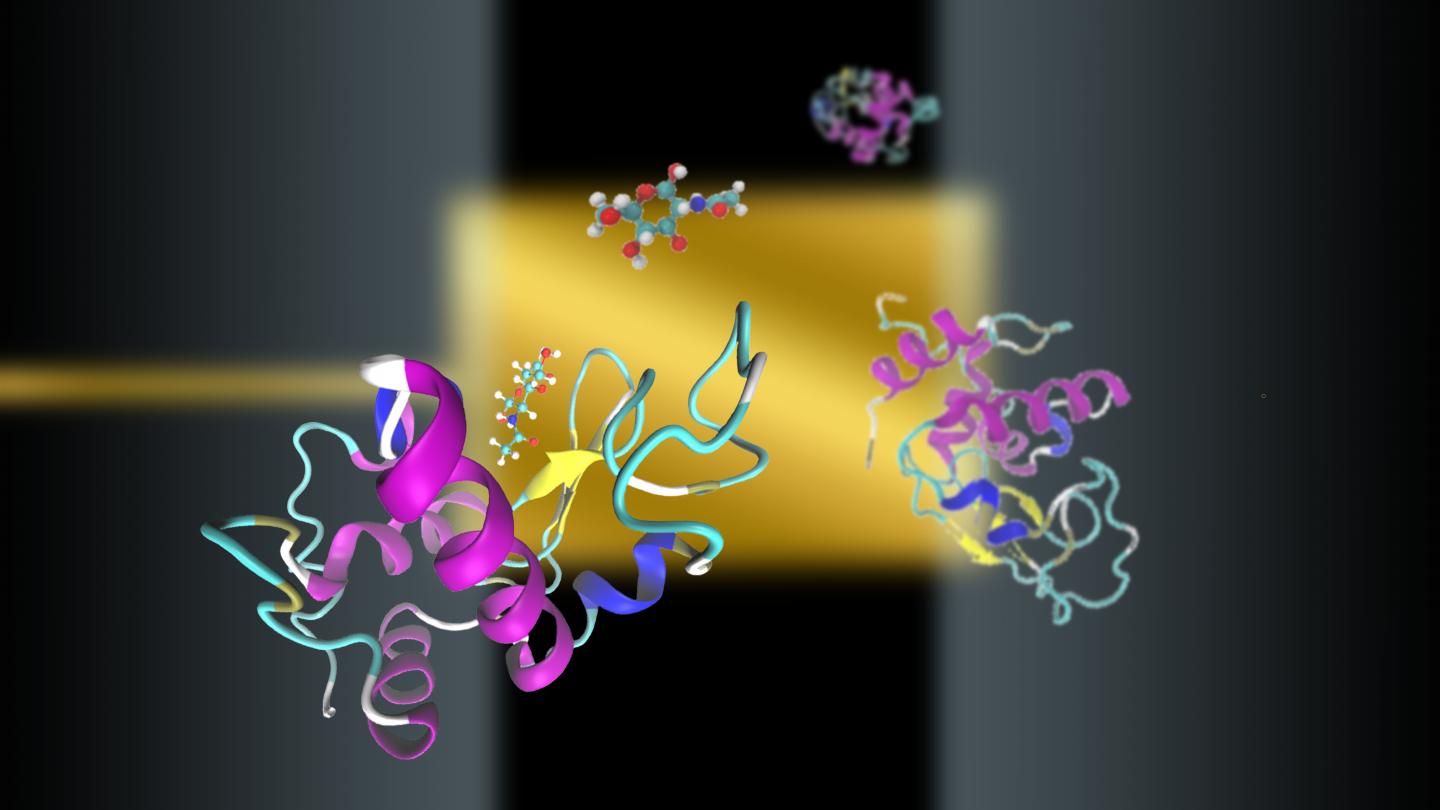 To understand the properties of nano- and bio- materials, Wei uses simulations that rely on parallel computing clusters such as the Stampede supercomputer at the Texas Advanced Computing Center (TACC), one of the fastest academic systems in the world.

“Computer simulations have become an important tool to complement experimental research in the development of nano-materials and bio-technologies,” Wei said. “Simulations provide atomistic details and illustrate quantum processes, which are difficult to detect in experiments.”

The 2013 Nobel Prize in Chemistry went to Arieh Warshel, Michael Levitt and Martin Karplus for the development of multi-scale models of complex chemical systems, reinforcing the importance of computational simulations in chemistry.

In areas from drug development to energy production, these methods have become invaluable.

Since Wei started his research group at Lamar University three years ago, he has used computational simulations at TACC to publish seven papers and to make 18 conference presentations.

From 2014 to 2016, the National Science Foundation-funded Extreme Science and Engineering Discovery Environment (XSEDE) program awarded Wei’s group several million computing hours on Stampede. He also uses several other supercomputers — including the NSF-supported Gordon and SuperMIC systems and the Department of Energy-funded Titan and Mira systems — to make progress on a variety of important problems.

“By using large-scale parallel computations on parallel computer clusters such as Stampede, we have been able to study the biological systems such as protein adsorption, electron transfer and lipid packing, and to design functional materials and biotechnologies,” Wei said.

The TIMES They Are A-Changin’…

Ligands are small molecules that bind to biomolecules, including proteins. They are often used in biochemistry and pharmacology to manipulate a protein’s structure or to signal changes in the protein environment.

Researchers have typically used methods such as fluorescent labeling and crystallization to study how exactly proteins and ligands interact. However, these methods either change the conditions of the reaction or limit what can be studied.

The advantage of the method is that it can characterize protein-ligand interactions without introducing disturbances to their binding.

With TIMES, proteins, ligands and protein-ligand complexes travel through an aqueous medium and interact with an electrode surface. Detectors connected to a low-noise electric amplifier produce signals that show the polarized electric response of the reaction products as they approach the electrode surface. These can be analyzed to determine exactly how the proteins and ligands bind — to what degree, over what timescale, and in what orientation.

In October, the team demonstrated the accuracy of the TIMES technique by measuring the ligand and protein interactions between lysozyme — an enzyme that damages bacterial cell walls — and the N-acetyl-D-glucosamine (NAG) ligand and its trimer, NAG3 . The work was published in the journal ACS Central Science.

“The approach of computational physics has provided extremely valuable information and insight,” said Yu-Hwa Lo, professor of Electrical and Computer Engineering at the University of California at San Diego and lead author of the paper.

“Computational physics plays a far greater role than mere modeling of the process microscopically. It is a valuable approach to help us conceive hypotheses that are testable experimentally, making the discovery process more productive and rational.”

Protein-ligand interactions are a subject of great interest in the biochemical field due to their practical applications in drug discovery.

The work was supported by multiple grants from the National Science Foundation (Grant ECCS-1610516) and by Vertex Pharmaceuticals, Inc.

Polyamides are the most widely used material to desalinate and purify seawater, wastewater and surface water using a process known as membrane-based reverse-osmosis.

“It’s a very mature material,” Wei said. “But we need to increase water permeation without losing desalination to lower the energy costs.”

Understanding the microscopic structure of the polyamide membrane and the molecular transfer process at the atomic level is critical to enhancing the material’s separation capabilities, which could lead to significant societal and commercial benefits.

Polyamide membranes are very thin, only 100 nanometers wide, and the pore size through which ions pass is only .3 nanometers, making it hard to determine experimentally what factors could be changed to improve the material’s performance.

“It’s very important that we have a tool to investigate the microstructure and molecular transfer through nanoporous membranes to see what’s going on inside,” he said.

In a paper in the Journal of Physical Chemistry B in September 2016, Wei and his team, working with Shroll Murad, Chair of Chemical and Biological Engineering at the Illinois Institute of Technology, described an effort to use simulations to characterize local structures in the material that are believed to be responsible for its macro-scale behavior.

Running a series of virtual experiments on Stampede, they found that the degree to which benzene rings in the material were cross-linked — held together not just at the ends, but also in the middle – played a major role in the transport of water.

“Water can permeate through the ring faster along certain paths, and those monomers are not cross-linked very well,” Wei said.

The research used a bottom-up approach, where they derived the parameters of the materials solely from the physics of the materials and their molecular bonding. The team found that the characteristics of the material, including its density, pore size distributions, water diffusion and salt exclusion, agreed with results from experimentally synthesized membranes and previous simulation studies.

In a follow-on study, Wei is exploring the incorporation of nano-materials like carbon nanotubes and graphene into pure polymer membranes to see if they improve water permeation.

“A better understanding of the structure of polyamide membranes will help design future desalinization and filtration methods, which will lower the energy costs and provide a lot of economic benefits,” he said.

A third computational project on Stampede led by Wei studies the electrical properties of a unique type of bacteria that can harness energy from its environment through the cycling of nitrogen, sulphur and iron.

Understanding the behavior of the bacterial proteins that enable this process — known as multiheme cytochromes — can aid in a variety of applications, including bioenergy production, solar-conversion catalysts, and the removal of toxic hexavalent chromium from water.

However, little is known about the structure of the bacterial proteins.

“We know that this type of bacteria can transfer electrons from inside to outside through certain protein nano-wires,” Wei said. “But we don’t know their complete protein structure and we don’t know how those proteins pack to form a nanowire.”

To gather these details and to understand how the proteins transfer electrons, Wei uses molecular dynamics simulations, where atoms and molecules are allowed to interact for a fixed period of time, giving a view of the dynamic evolution of the system.

“To exploit emergent biomolecules’ electric properties for promising applications in energy and environment, it is critical to understand the interfacial behavior of those conducting proteins,” he said.

Wei and his team performed a variety of simulations on Stampede to study the degree to which decaheme cytochrome adheres to a gold surface in water, and the electron transfer efficiency of the process.

Their results, published in February 2016 in the Journal of Physical Chemistry Letters, revealed that dehydration — which involves the loss of a water molecule from the reacting molecule — on the gold surface serves as a crucial driving force for protein adsorption.

“If we put those proteins on the electron surface and then we transfer the electron between the outside environment and the inside of the electrode surfaces, we can convert energy or reduce toxic heavy metals through the redox methods,” Wei said. “This is very cutting edge, but we see several cool examples already.”

Whether through studies of desalinizing polymers, bacterial nano-wires or protein-ligand binding sensors, investigating the atomic and quantum behavior of molecules has the potential to help scientists understand new and improved biomaterials. Wei is also extending his research to anti-biofouling and anti-biocorrosion materials design.

“These microscopic tools can give you a lot of information,” Wei said. “Each type of simulation has limitations, but when we have a strong theoretical background and can connect different scales, we can rationalize experimental structure-function designs and solve important scientific and engineering problems.”