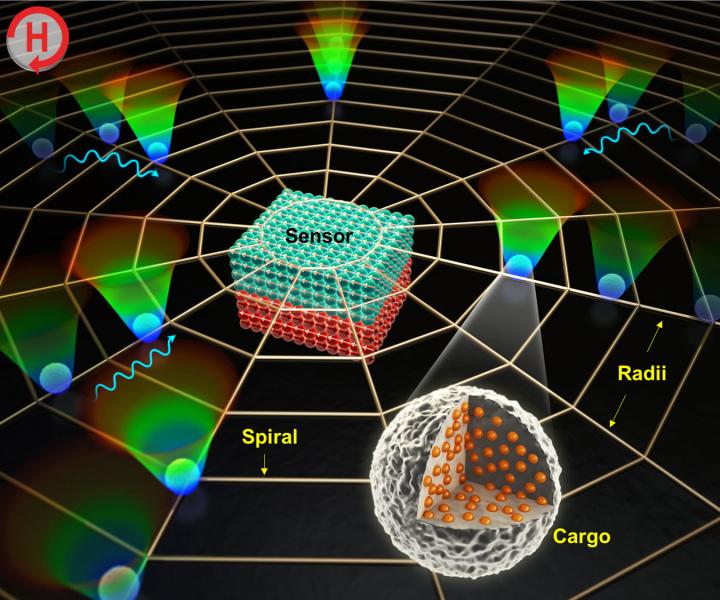 This is a schematic of a biosensor platform resembling a spider web. (Credit: DGSIT)

The sensing capability of a biosensor is determined by the resolution of the sensor and the movement and reaction rate of molecules. Many research groups in Korea and other countries have been improving the resolution through the development of nanomaterials but there has been a limitation to improve the sensors’ sensitivity due to the low diffusion transport of biomolcules toward the sensing region.

The research team developed a new biosensor platform using a spider web-shaped micro-magnetic pattern. It improved the sensing ability of the biosensor as it increased the ability to collect low-density biomolecules by attracting biomolecules labeled with the superparamagnetic particles to the sensing area.

A photo of the magnetic spider web chip integrated with the magnetoresistive sensorLandscape of effective stray field depending on the particle location with respect to sensing area of the sensor The measured sensor signal (Credit: DGIST)

The first author Byeonghwa Lim at DGIST’s Ph.D program of Emerging Materials Science elaborated on the biosensor platform, “We placed a spider web-shaped micro-magnetic pattern which was designed to move the superparamagnetic particles toward the center of the biosensor and a high sensitivity biosensor on the platform. When a rotating magnetic field is applied to a spider web-shaped magnetic pattern, it can attract biomolecules labeled with superparamagnetic particles faster to the sensor. The speed of the movement is very fast and it can detect the subject 20 times faster than the diffusion method.”

The research team also succeeded in monitoring the biomolecules conjugated to the superparamagnetic particles at a distance from the sensing area by utilizing the biosensor platform. In addition, the team has identified that the superparamagnetic particles not only play the role of biomolecular cargo for transportation, but also act as labels for the sensor to indicate the location of biomolecules.

Professor Kim states, “The existing biosensors require long time to detect low density biomolecules and result in poor sensing efficiency as they only depend on diffusion. The magnetic field based biosensor platform improves the collection capability of biomolecules and increases the speed and sensitivity of the biomolecules movement. Therefore, we are planning to use this platform for early diagnosis as well as recurrence diagnosis of diseases such as cancer. “