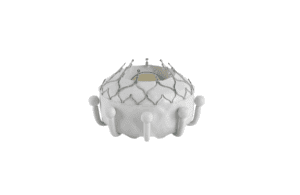 Evoque is designed to replace native tricuspid valves without open-heart surgery. The valve is implanted using a minimally invasive delivery system where a doctor places a thin tube through a vein in the leg to reach the patient’s heart and perform the valve replacement procedure.

There were 56 patients in the study who had an average Kansas City Cardiomyopathy Questionnaire overall summary score of 46 at baseline, which indicates severe disability. The score improved by 19 points at 30 days with the Evoque device. Walk distance also improved by 46 meters after device intervention.

Edwards’s trial had a composite major adverse event rate of 22.6% with 1 cardiovascular death, 2 non-elective tricuspid re-interventions, 1 major access site/vascular complication and 12 severe bleeding events that were non-life-threating or fatal, according to the study.

The company plans to add more patients to the Triscend study and continue to evaluate the patients at six months, one year and annually for five years.