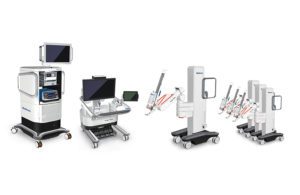 Medtronic’s (NYSE:MDT) Hugo surgical robot may soon be back on track as the company looks to increase production.

Speaking on the company’s third-quarter earnings call, as transcribed by SeekingAlpha, Medtronic Chairman and CEO Geoff Martha confirmed that the medtech giant has made progress improving its supply chain and manufacturing. As a result, Medtronic is now looking to scale production for its medical-surgical portfolio, including Hugo.

When Fridley, Minnesota-based Medtronic’s second-quarter earnings came out in November 2021, Martha said the platform’s launch is “not on-schedule but not off-track” amid supply chain issues.

“There is a lot of focus, obviously, on Hugo,” Martha said today. “We are feeling good there. Certainly, by [next year and the year after], we will work through some of these manufacturing and supply chain issues. And we are feeling really good about the quality of what we have here and the impact that Hugo is going to have.”

Martha said the company remains “focused on scaling production” while also looking to add regulatory approvals and expand the platform’s limited market release, which has most recently reached Canada, Australia and Israel. Medtronic also plans to start a U.S. urology clinical trial while, in addition to urology and gynecology cases, surgeons in Panama, Chile and India are using Hugo for general surgery procedures.

“We certainly expect to continue to expand the regulatory approvals in more countries,” Medtronic EVP and President of Medical Surgical Bob White said on the call. “We certainly look to expand in the future to thoracic, colorectal, hernia, bariatric procedures. Obviously, Hugo was designed with all those procedures in mind. We’re working with all those regulatory agencies and the feedback itself has been really positive.”

Aside from Hugo, another highly anticipated Medtronic platform that hit a slight snag was its Symplicity renal denervation platform, but the company appears to be making progress there, too.

In October 2021, Medtronic announced that the clinical study of its Symplicity Spyral renal denervation (RDN) system for hypertension would continue into next year after lacking the positive results needed to end enrollment early.

Martha said on the third-quarter earnings call that enrollment continues for the ON MED study, with a six-month follow-up expected to be completed in the second half of 2022 before data is submitted to the FDA. Martha confirmed that ON MED represents the final piece of the company’s submission in the search for approval for Symplicity.

Three-year data from ON MED will be presented at the ACC Scientific Sessions in April.