Ramesh Raskar, founder of the Camera Culture research group at the MIT Media Lab and associate professor of media arts and sciences at MIT, is the recipient of the 2016 $500,000 Lemelson-MIT Prize. Raskar is the co-inventor of radical imaging solutions including femtophotography, an ultra-fast imaging system that can see around corners; low-cost eye-care solutions for the developing world; and a camera that allows users to read pages of a book without opening the cover. Raskar seeks to catalyze change on a massive scale by launching platforms that empower inventors to create solutions to improve lives globally.

Raskar has dedicated his career to linking the best of the academic and entrepreneurial worlds with young engineers, igniting a passion for impact inventing. He is a pioneer in the fields of imaging, computer vision and machine learning and his novel imaging platforms offer an understanding of the world that far exceeds human ability. Raskar has mentored more than 100 students, visiting students, interns, and postdocs, who, with his guidance and support, have been able to kick-start their own highly successful careers. 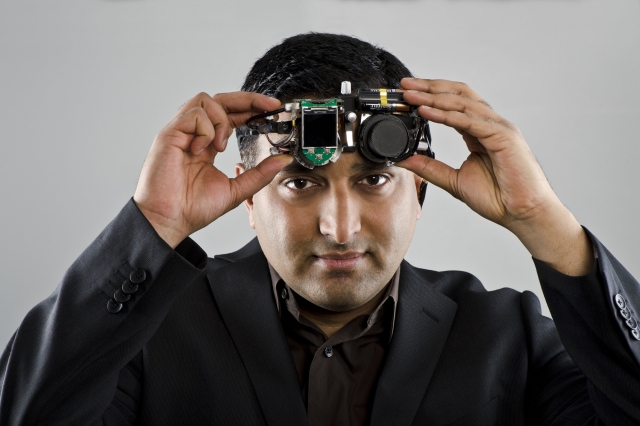 Imaging scientist and social impact inventor Ramesh Raskar of MIT is the 2016 recipient of the $500,000 Lemelson-MIT Prize. A pioneer in the field of vision technologies, Raskar has invented a camera that operates at the speed of light to see around corners and do-it-yourself tools for medical imaging of the eye. Raskar also uses invention and collaboration to respond to current and forward-looking needs in societies around the world through his Emerging Worlds initiative. (Credit: Len Rubenstein)

“Raskar is a multi-faceted leader as an inventor, educator, change maker and exemplar connector,” said Stephanie Couch, executive director of the Lemelson-MIT Program. “In addition to creating his own remarkable inventions, he is working to connect communities and inventors all over the world to create positive change.”

The Lemelson-MIT Prize honors outstanding mid-career inventors improving the world through technological invention and demonstrating a commitment to mentorship in science, technology, engineering, and mathematics (STEM). The prize is made possible through the support of The Lemelson Foundation, the world’s leading funder of invention in service of social and economic change. Over the next three years, Raskar will be investing a portion of the prize money to support the development of young inventors.

“We are thrilled to honor Ramesh Raskar, whose breakthrough research is impacting how we see the world,” said Dorothy Lemelson, chair of The Lemelson Foundation. “Ramesh’s femtophotography work not only has the potential to transform industries ranging from internal medicine to transportation safety, it is also helping to inspire a new generation of inventors to tackle the biggest problems of our time.”

In 2012, Raskar co-created femtophotography, an advanced form of photography allowing cameras to see around corners. The technology, currently in development for commercialization, uses ultrafast imaging to capture light at 1 trillion frames per second, allowing the camera to create slow motion videos of light in motion. Raskar and his team have received significant funding from sponsors including the U.S. Defense Advanced Research Projects Agency (DARPA), the National Science Foundation, and MIT to further develop the idea of using “scattered light imaging” to see around corners.

Potential future applications include: Avoiding car collisions at blind spots; detecting survivors in fire and rescue situations; and performing endoscopy and medical imaging to eliminate the need of an X-ray. Raskar is continuing this research to make the seemingly impossible possible—from reading a book without opening the cover to capturing images of out-of-sight objects using sound waves.

A Vision for Improved Eye-Care in the Developing World

Raskar is the co-founder of EyeNetra, an inexpensive, disruptive eye-care platform that spun out of Media Lab research. EyeNetra enables on-demand eye testing in remote locations via a hand-held technology that snaps onto a mobile device. When looking into the binocular the user is provided with interactive cues to rapidly calculate a prescription for eyeglasses. The technology was created to eliminate the need for expensive diagnostic tools in the developing world; the young company has performed eye-tests for hundreds of thousands of subjects and is currently active in the U.S., Brazil, and India.

Raskar’s team has also worked on many areas of preventable blindness, low vision, and diagnostics at MIT. In 2013, he and his colleagues launched LVP-MITRA in Hyderabad, India, a center where hundreds of young inventors have been co-inventing next generation screening, diagnostic, and therapeutic tools for eye-care.

Raskar is also the founder of the Emerging Worlds initiative, a year-round effort focused on solving some of the world’s most pressing problems and impacting billions worldwide. This initiative, based at MIT, links corporate members, government organizations, educational institutes, and venture partners. The members—MIT researchers, young innovators, and entrepreneurs—work in very specific integrated ecosystems to spot problems, probe solutions, grow adoption, and scale the deployment.

This methodology was recently used at the Kumbhathon sandbox for innovations at Kumbh Mela, a gathering of 30 million people, and at the Digital Impact Square, a multi-million-dollar living lab and open co-innovation center. Raskar has mentored several teams that span crowd-steering via use of cell tower data to display heat maps of crowd movements, stations to test vital statistics using portable instruments, and an analytics-based system to detect impending epidemic outbreaks in real-time.

“Everyone has the power to solve problems and through peer-to-peer co-invention and purposeful collaboration, we can solve problems that will impact billions of lives,” Raskar says. He plans to use a portion of the Lemelson-MIT Prize money to launch a new effort using peer-to-peer invention platforms that offer new approaches for helping young people in multiple countries to co-invent in a collaborative way. Visit redx.io to learn more or to apply.

Raskar will speak at EmTech MIT, the annual conference on emerging technologies hosted by MIT Technology Review at the MIT Media Lab on Tuesday, Oct. 18.

The Lemelson-MIT Program celebrates outstanding inventors and inspires young people to pursue creative lives and careers through invention. Jerome H. Lemelson, one of the most prolific inventors in U.S. history, and his wife Dorothy founded the Lemelson-MIT Program at MIT in 1994. It is funded by The Lemelson Foundation and administered by the School of Engineering at MIT, an institution with a strong ongoing commitment to creating meaningful opportunities for K-12 STEM education.

Based in Portland, OR, The Lemelson Foundation uses the power of invention to improve lives. Inspired by the belief that invention can solve many of the biggest economic and social challenges of our time, the foundation helps the next generation of inventors and invention-based businesses to flourish. The Lemelson Foundation was established in the early 1990s by prolific inventor Jerome Lemelson and his wife Dorothy. To date, the foundation has made grants totaling more than $200 million in support of its mission.