Research has determined that listening to music is very important in stimulating brain changes and enhancing neurological development in children; pediatricians recommend that parents let their children listen to music for that reason. Studies also suggest that unborn babies between 18 and 26 weeks old also benefit from jamming out—so you might not want to roll your eyes at expectant mothers wearing headphones over their stomachs.

But how much can a fetus really hear through the mother’s skin? According to the company behind Babypod (I’ll get exactly into what it is in a moment), “The uterus is a place protected from the exterior, and it is the mother’s body that carries out this protecting role through multiple layers of soft tissue. These attenuate the intensity of sound and distort it in its journey to the uterus; it’s similar to what happens when you hear a conversation in the next-door room without catching everything that is said.” So while it might be beneficial for the fetus to hear music, it’s difficult to get proper amplification.

Ready for Babypod’s solution for better sound clarity? Put speakers right in the mother’s vagina so the baby can hear. No, it’s not a joke. 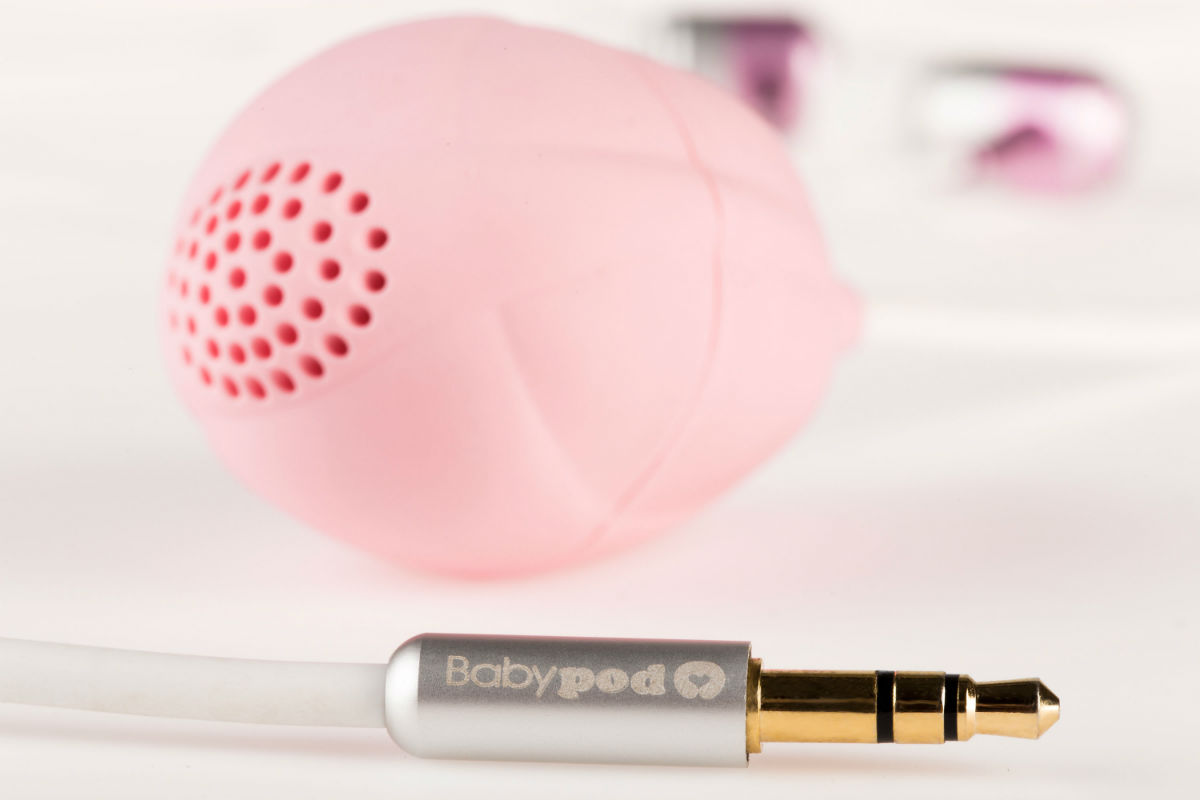 “The vagina is a closed space, so sound is not dispersed in the environment,” claims Babypod on their website. “By placing a speaker inside the vagina, we overcome the barrier formed by the abdominal wall and the baby can hear sounds with almost as much intensity and clarity as when emitted.”

A tiny intravaginal device similar to a tampon, Babypod contains speakers that play music at 54 decibels—about the intensity of speaking in hushed tones—and loud enough for the baby to hear without damaging fetal hearing. Babies that listened to music via the intravaginal speakers were reported to react with body, mouth, and tongue movements in response to the music, showing that they were at least aware of the sounds.

There was even a Christmas concert held by singer Soraya to mothers clad in Babypods.

Babypod is safe for mothers, as well; all that comes into contact with the body is silicone, which shouldn’t irritate the skin or cause an allergic reaction. The sound waves traveling through the vagina have been shown not to have negative effects on the fetus, the first 100 children who listened to Babypod have been born and otoacoustic emission studies were normal at birth. Naturally, mothers shouldn’t use Babypod during labor contractions or dilation of the cervix, nor during high-risk pregnancies.

This is definitely an unorthodox method, and probably shouldn’t be done in public (a vibrating object in the mother’s vagina may bring about some…unexpected effects), but it seems to be safe and listening to music can only stimulate creativity. Babypod claims some fetuses begin to vocalize in the womb!

The only question remaining is what exactly the optimal vaginal playlist might be, but that’s up to the parents. Will you choose Beethoven? The Beatles? Yours truly?