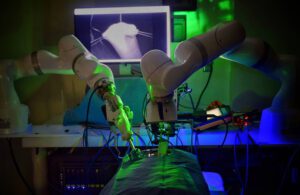 A Johns Hopkins University research team has created a robot that can perform laparoscopic surgery on a pig’s soft tissue without a human being’s aid.

The researchers described their latest advance with their Smart Tissue Autonomous Robot (STAR) in the January 26 issue of Science Robotics.

“Our findings show that we can automate one of the most intricate and delicate tasks in surgery: the reconnection of two ends of an intestine. The STAR performed the procedure in four animals, and it produced significantly better results than humans performing the same procedure,” said senior author Axel Krieger, an assistant professor of mechanical engineering at Johns Hopkins.

The work advances on a 2016 version of the robot that accurately repaired a pig’s intestines but needed a large incision to access the intestine. The 2016 experiment also required more human guidance.

Activ Surgical (Boston) has roots in the STAR work back in 2016, though Activ’s founder Dr. Peter Kim has since moved on. Activ Surgical’s present focus is on its ActivEdge surgical intelligence software. A spokesperson for the company noted that the Johns Hopkins team improved autonomy from 57% to 84% since the 2016 study by adding machine learning in a microscopic form factor. “Dr. Kim congratulates the team on their progress.”

STAR boasts a control system able to adjust the surgical plan in real-time.

“What makes the STAR special is that it is the first robotic system to plan, adapt, and execute a surgical plan in soft tissue with minimal human intervention,” said first author Hamed Saeidi, a visiting research scientist of mechanical engineering at Johns Hopkins.

Krieger thinks STAR could enable a democratized surgical approach with consistent patient outcomes. “Robotic anastomosis is one way to ensure that surgical tasks that require high precision and repeatability can be performed with more accuracy and precision in every patient independent of surgeon skill.”