A team of researchers at the University of Chicago has developed new technology that allows for recording and viewing the process by which a silicon nanowire is consumed by an individual cell. In their paper published in the journal Science Advances, the team describes the technique they used and why they believe it could lead to new ways of merging biological systems and electronic devices. 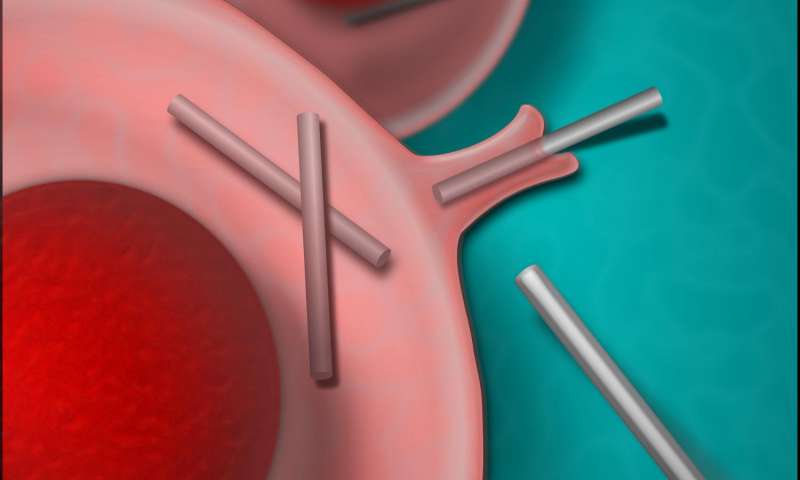 Prior research has shown that certain types of cells would consume silicon nanowires introduced to the same petri dish. In this new effort, the researchers have developed a way to study the process, revealing how it comes about—a necessary step before attempting to use the nanowires to control the behavior of a cell or as a means of tricking a cell into consuming a drug.

Scientists are eager to find a way to gain control over cells in order to combat diseases at a cellular level. That was what led researchers to search for a material that could be consumed naturally by a cell, but which could also be used as a control mechanism.

To better understand what happens when silicon nanowires encounter certain cells (such as those lining the inside of blood vessels) the researchers combined two types of technology, an electron microscope and an optical imaging tool they designed specifically for tracking the movement of the nanowire—they call it a scatter-enhanced phase contrast. This setup allowed the researchers to watch as part of the outer membrane of the cell reached out to the nanowire and wrapped itself around it and then pulled it closer, eventually forming a bubble encasing the nanowire. Once the nanowire was secured, it was pulled into the cell, where it was corralled by various bits of the inner cell to a location near the nucleus. The researchers report that the process appears to be identical to phagocytosis—the process immune cells use to consume bacteria.

The researchers observed that consuming a nanowire did not appear to cause any harm to the cell. This suggests that modified nanowires could one day serve as an electrical conduit for use in controlling some of the behaviors inside the cell, or to carry drugs into the cell that ordinarily are barred.