While making smart glue, a team of engineers discovered a handy byproduct: hydrogen peroxide. In microgel form, it reduces bacteria and virus ability to infect by at least 99 percent.

Hao Meng’s doctoral project focused on biocompatibility testing and pulling a sticky amino acid out of mussels. Glue-like catechol shows promise for smart adhesives—a small jolt of electricity can turn the stickiness on and off—but that’s not its only potential use.

“In the process, Meng discovered the chemical reaction generated hydrogen peroxide as a byproduct of oxidation,” says Bruce Lee, associate professor of biomedical engineering and Meng’s Ph.D. advisor at Michigan Technological University. “She started thinking, what if we could use the hydrogen peroxide?”

The answer is yes, and the technology that makes this portable, healing disinfectant possible is the subject of a new paper published in Acta Biomaterialia. The work brought together an interdisciplinary team of engineers to explore not only the tech development but also the material’s physical and biological properties. 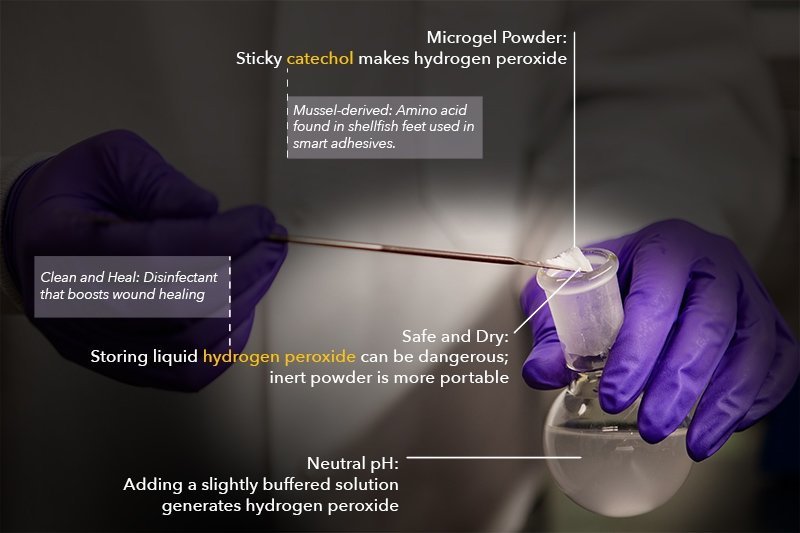 After Meng first observed that her reactions created hydrogen peroxide, she started considering the best form to put the byproduct in. She wanted lots of surface area to power the chemical reaction and she wanted a way to reuse the material. So, the team made a microgel.

Microgels are like tiny bubbles of jello. To the naked eye, the dry form is a nondescript powder. Suspend it in a solution with neutral or a slightly alkaline pH, such as distilled water or a saline solution like contact lens cleaner, and the hydrogen peroxide cycle gets rolling. Left to its own devices, the micron-sized microgels generated between one to five millimolars over four days. Once the microgel powder is dried again, the material basically resets, sits safely contained in a small bag, and can be reused. It’s like an on-demand bottle of disinfectant—without the bulky bottle and hazardous storage issues.

The inspiration for that iconic brown bottle in the medicine cabinet didn’t start in a lab; the body naturally produces hydrogen peroxide to help heal cuts and the substance has been widely used medicinally to kill off bacteria and even viruses. Because the microgel powder continues to create and release hydrogen peroxide, its potency remains high, especially compared to the old-school cotton ball technique.

The team studied the microgel’s effects on two common bacterial strains and two structurally different viruses. That includes the thin-walled and gram-positive Staphylococcus epidermidis, as well as the more impenetrable and gram-negative Escherichia coli (E. coli). They also looked at the extremely resistant non-enveloped porcine parovirus (PPV) and easier to inactivate enveloped bovine viral diarrhea virus (BVDV). Because of the hard protein casing around PPV, which makes it and other non-enveloped viruses more resistant to biocides, the team was pleasantly surprised to see that the microgel still reduced the virus’ ability to infect cells by 99.9 percent. (In technical terms, that’s a three log reduction value of infectivity.) With BVDV, they observed a 99.999 percent reduction in infectivity.

From Camping to Battlefields

The possibilities are almost endless. Wherever a small bag can go, so could this technology. Whether it’s backcountry travel, space stations, remote clinics or war zones, a little bit of healing to prevent infection can go a long way. While Lee and his team say the tech is not quite ready for Amazon Prime, they are hopeful that the work shows promise for a variety of applications, perhaps even with antibiotic resistance.

“We haven’t tested any antibiotic-resistant bacterial strains yet, but the more we can get away from using antibiotics in the first place, the better,” Lee says. “There’s still a lot of work to be done. We want to demonstrate under what conditions it promotes healing and how a cell responds to it. Hydrogen peroxide at high concentrations can also kill cells, so we need to have a balance that changes for different cell types.”

Lee recently received funding from the Department of Defense Office of the Assistant Secretary of Defense for Health through the Defense Medical Research and Development Program to continue this line of research. What started with a sticky protein’s waste will be refined into a lightweight, portable and recyclable microgel powder with enough oomph to kick even the most stubborn bacterial and viral infections. 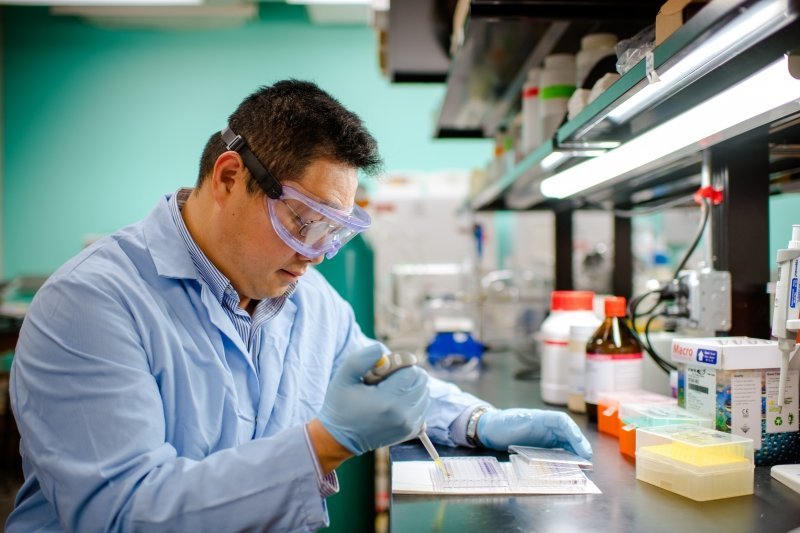