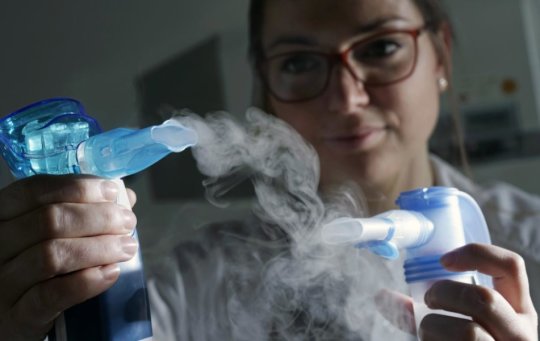 Around one in 3,300 children in Germany is born with Mucoviscidosis. A characteristic of this illness is that one channel albumen on the cell surface is disturbed by mutations. Thus, the amount of water of different secretions in the body is reduced which creates a tough mucus. As a consequence, inner organs malfunction. Moreover, the mucus blocks the airways. Thus, the self regulatory function of the lung is disturbed, the mucus is colonized by bacteria and chronic infections follow. The lung is so significantly damaged that patients often die or need to have a lung transplant. The average life expectancy of a patient today is around 40 years. This is due to medical progress. Permanent treatment with inhaled antibiotics play a considerable part in this. The treatment can’t avoid the colonization by bacteria completely but it can keep it in check for a longer period of time. However, the bacteria defend themselves with a development of resistance and with the growth of so-called biofilms underneath the layer of mucus, which mostly block off the bacteria in the lower rows like a protective shield.

A complex way to the Pathogens

Scientists of the Friedrich Schiller University Jena, Germany succeeded in developing a much more efficient method to treat the airway infections which are often lethal. Crucial are nanoparticles that transport the antibiotics more efficiently to their destination. “Typically, the drugs are applied by inhalation in the body. Then they make a complicated way through the body to the pathogens and many of them don’t make it to their destination,” states Prof. Dr Dagmar Fischer of the chair for Pharmaceutical Technology at the University of Jena, who supervised the project together with her colleague Prof. Dr Mathias Pletz, a pulmonologist and infectious diseases physician, from the Center for Infectious Diseases and Infection Control at the Jena University Hospital. The project was supported by the Deutsche Forschungsgemeinschaft. First of all, the active particles need to have a certain size to be able to reach the deeper airways and not to bounce off somewhere else before. Ultimately, they have to penetrate the thick layer of mucus on the airways as well as the lower layers of the bacteria biofilm.

To overcome the strong defense, the researchers encapsulated the active agents, like the antibiotic Tobramycin, in a polyester polymer. Thus, they created a nanoparticle which they then tested in the laboratory where they beforehand had simulated the present lung situation, in a static as well as in a dynamic state, i. e. with simulated flow movements. Therefore Pletz’s research group had developed new test systems, which are able to mimick the situation of the chronically infected CF-lung. The scientists discovered that their nanoparticle travels more easily through the sponge-like net of the mucus layer and is finally able to kill off the pathogens without any problems. Moreover, an additionally applied coating of polyethylenglycol makes it nearly invisible for the immune system. “All materials of a nanocarrier are biocompatible, biodegradable, nontoxic and therefore not dangerous for humans,” the researcher informs.

However, the Jena scientists don’t know yet exactly why their nanoparticle fights the bacteria so much more efficiently. But they want to finally get clarification in the year ahead. “We have two assumptions: Either the much more efficient transport method advances significantly larger amounts of active ingredients to the center of infection, or the nanoparticle circumvents a defense mechanism, which the bacterium has developed against the antibiotic,” the Jena Pharmacist Fischer explains. “This would mean, that we succeeded in giving back its impact to an antibiotic, which had already lost it through a development of resistance of the bacteria.”

“More specifically, we assume that bacteria from the lower layers of the biofilm transform into dormant persisters and hardly absorb any substances from outside. In this stadium, they are tolerant to most antibiotics, which only kill off self-dividing bacteria. The nanoparticles transport the antibiotics more or less against their will to the inner part of the cell, where they can unfold their impact,” Mathias Pletz adds.

Additionally, the Jena research team had to prepare the nanoparticles for the inhalation. Because at 200 nanometers the particle is too small to get into the deeper airways. “The breathing system filters out particles that are too big as well as those which are too small,” Dagmar Fischer explains. “So, we are left with a preferred window of between one and five micrometers.” The Jena researchers also have promising ideas for resolving this problem.

Coating of Nanoparticles enhances the impact of Antibiotics against Biofilms

The scientists from Jena are at this point already convinced to have found a very promising method to fight respiratory infections of patients with mucoviscidosis. Thus they may be able to contribute to a higher life expectancy of those affected. “We were able to show that the nanoparticle coating improves the impact of the antibiotics against biofilm by a factor of 1,000,” the pulmonologist and infectious diseases physician is happy to say.