α-Synuclein is a major component of Lewy bodies, the pathological hallmark of Parkinson’s disease, and α-synuclein aggregation in the brain has been linked to disease onset and progression. A therapy that prevents the accumulation of misfolded α-synuclein is therefore a promising strategy. However, methods to assess levels of α-synuclein have not been well established, which means the efficacy of any such treatment cannot be tested. To address this, Hideki Mochizuki and his research team at Osaka University developed the HANdai Amyloid Burst Inducer (HANABI) device, which is a fully automated tool that can accurately detect α-synuclein aggregation in cerebrospinal fluid using ultrasonication. They recently published their findings in Scientific Reports.

“This system has the potential to distinguish patients with Parkinson’s disease from controls based on seeding activity of α-synuclein aggregates in cerebrospinal fluid,” study corresponding author Mochizuki says. This tells us that the HANABI device is sensitive enough to have real clinical potential, and supports the idea that α-synuclein aggregation is a marker of the disease.”

The seeding activity of α-synuclein describes its ability to change normal α-synuclein protein into abnormal aggregates. Interestingly, the seeding activity of cerebrospinal fluid evaluated by the HANABI assay was correlated with the uptake of 123I-meta-iodobenzylguanidine, which is a prominent radiological feature of Parkinson’s disease; low uptake has been linked to neurodegeneration.. Thus, seeding activity in the cerebrospinal fluid of patients with Parkinson’s disease could reflect the progression of Lewy body pathology.

Furthermore, the HANABI device allows for an unparalleled processing time. It uses ultrasonication to amplify α-synuclein aggregates that are capable of seeding so that they can be measured. Ultrasonication induces pressure variations, transforming sound waves into mechanical energy. This amplifies α-synuclein seeds more rapidly than the alternative method of orbital shaking, which reduces the time necessary to perform the assay.

“The HANABI device was developed to overcome limitations of existing methods and process multiple samples simultaneously,” lead author Keita Kakuda says. “This has allowed us to drastically shorten the time to perform the assay, from around 10 days to only several hours.” 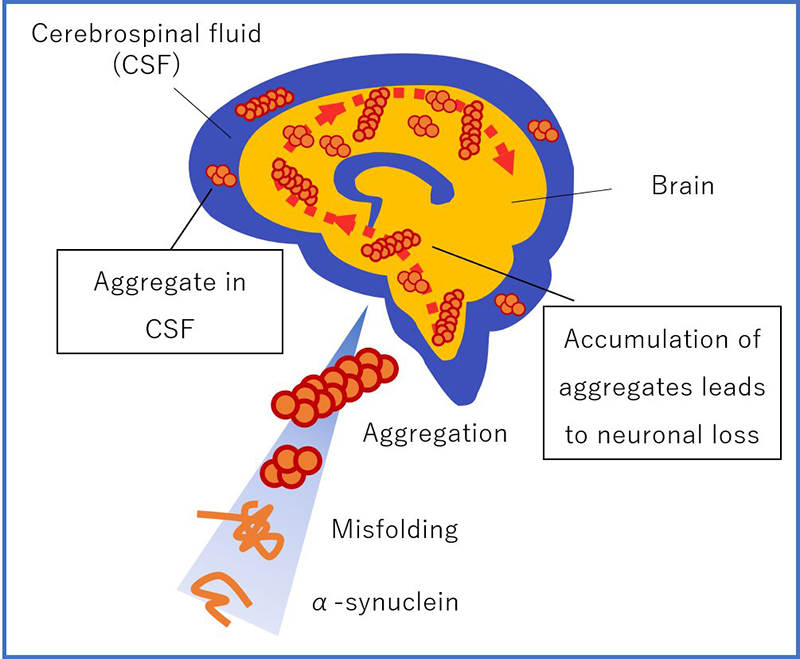 The accumulation of α-synuclein aggregates in the brain of patients with Parkinson’s disease. Credit: Osaka University