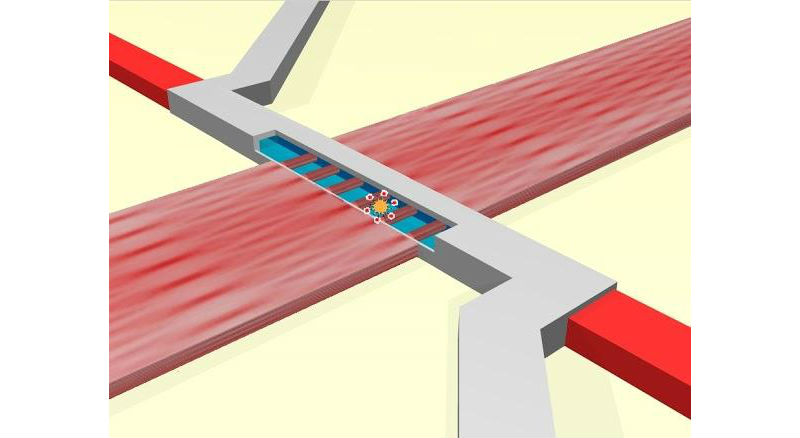 New chip-based optical sensing technologies developed by researchers at UC Santa Cruz and Brigham Young University enable the rapid detection and identification of multiple biomarkers. In a paper published October 5 in Proceedings of the National Academy of Sciences, researchers describe a novel method to perform diagnostic assays for multiple strains of flu virus on a small, dedicated chip.

“A standard flu test checks for about ten different flu strains, so it’s important to have an assay that can look at ten to 15 things at once. We showed a completely new way to do that on an optofluidic chip,” said senior author Holger Schmidt, the Kapany Professor of Optoelectronics in the Baskin School of Engineering at UC Santa Cruz.

Over the past decade, Schmidt and his collaborators at BYU have developed chip-based technology to optically detect single molecules without the need for high-end laboratory equipment. Diagnostic instruments based on their optofluidic chips could provide a rapid, low-cost, and portable option for identifying specific disease-related molecules or virus particles.

In the new study, Schmidt demonstrated a novel application of a principle called wavelength division multiplexing, which is widely used in fiber-optic communications. By superimposing multiple wavelengths of light in an optical waveguide on a chip, he was able to create wavelength-dependent spot patterns in an intersecting fluidic channel. Virus particles labeled with fluorescent markers give distinctive signals as they pass through the fluidic channel depending on which wavelength of light the markers absorb.

“Each color of light produces a different spot pattern in the channel, so if the virus particle is labeled to respond to blue light, for example, it will light up nine times as it goes through the channel, if it’s labeled for red it lights up seven times, and so on,” Schmidt explained.

The researchers tested the device using three different influenza subtypes labeled with different fluorescent markers. Initially, each strain of the virus was labeled with a single dye color, and three wavelengths of light were used to detect them in a mixed sample. In a second test, one strain was labeled with a combination of the colors used to label the other two strains. Again, the detector could distinguish among the viruses based on the distinctive signals from each combination of markers. This combinatorial approach is important because it increases the number of different targets that can be detected with a given number of wavelengths of light.

For these tests, each viral subtype was separately labeled with fluorescent dye. For an actual diagnostic assay, fluorescently labeled antibodies could be used to selectively attach distinctive fluorescent markers to different strains of the flu virus.

While previous studies have shown the sensitivity of Schmidt’s optofluidic chips for detection of single molecules or particles, the demonstration of multiplexing adds another important feature for on-chip bioanalysis. Compact instruments based on the chip could provide a versatile tool for diagnostic assays targeting a variety of biological particles and molecular markers.

The optofluidic chip was fabricated by Schmidt’s collaborators at Brigham Young University led by Aaron Hawkins. The joint first authors of the PNAS paper are Damla Ozcelik and Joshua Parks, both graduate students in Schmidt’s lab at UC Santa Cruz. Other coauthors include Hong Cai and Joseph Parks at UC Santa Cruz and Thomas Wall and Matthew Stott at BYU.

In another recent paper, published September 25 in Nature Scientific Reports, Schmidt’s team reported the development of a hybrid device that integrates an optofluidic chip for virus detection with a microfluidic chip for sample preparation.

“These two papers represent important milestones for us. Our goal has always been to use this technology to analyze clinically relevant samples, and now we are doing it,” Schmidt said.