Eight people who have spent years paralyzed from spinal cord injuries have regained partial sensation and muscle control in their lower limbs after training with brain-controlled robotics, according to a study published Aug. 11 in Scientific Reports.

The patients used brain-machine interfaces, including a virtual reality system that used their own brain activity to simulate full control of their legs. Videos accompanying the study illustrate their progress.

The research — led by Duke University neuroscientist Miguel Nicolelis, M.D., Ph.D., as part of the Walk Again Project in São Paulo, Brazil — offers promise for people with spinal cord injury, stroke and other conditions to regain strength, mobility and independence. 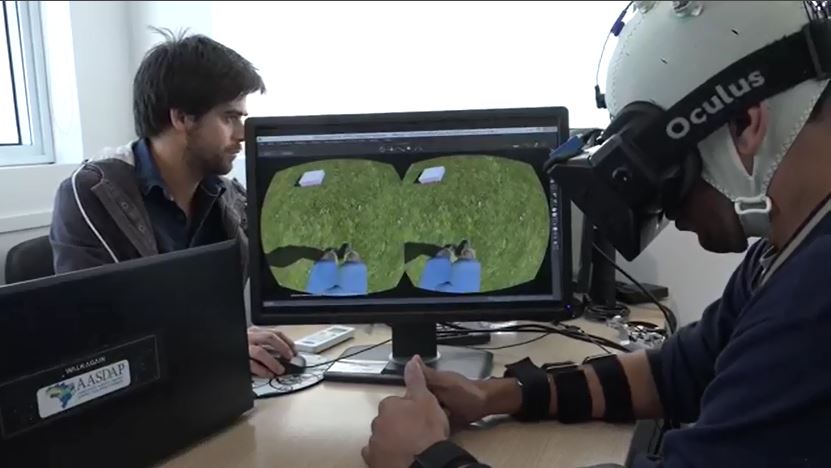 “We couldn’t have predicted this surprising clinical outcome when we began the project,” said Nicolelis, co-director of the Duke Center for Neuroengineering who is originally from Brazil.

“What we’re showing in this paper is that patients who used a brain-machine interface for a long period of time experienced improvements in motor behavior, tactile sensations and visceral functions below the level of the spinal cord injury,” e said. “Until now, nobody has seen recovery of these functions in a patient so many years after being diagnosed with complete paralysis.”

Most patients saw improvements in their bladder control and bowel function, reducing their reliance on laxatives and catheters, he said. These changes reduce patients’ risk of infections, which are common in patients with chronic paralysis and are a leading cause of death, Nicolelis said.

Brain-machine systems establish direct communication between the brain and computers or often prosthetics, such as robotic limbs. For nearly two decades, Nicolelis has worked to build and hone systems that record hundreds of simultaneous signals from neurons in the brain, extracting motor commands from those signals and translating them into movement.

Nicolelis and colleagues believe with weekly training, the rehab patients re-engaged spinal cord nerves that survived the impact of the car crashes, falls and other trauma that paralyzed their lower limbs. At the beginning of rehabilitation, five participants had been paralyzed at least five years; two had been paralyzed for more than a decade.

One participant, “Patient 1,” was a 32-year-old woman paralyzed for 13 years at the time of the trial who experienced perhaps the most dramatic changes. Early in training, she was unable to stand using braces, but over the course of the study, she walked using a walker, braces and a therapist’s help. At 13 months, she was able to move her legs voluntarily while her body weight was supported in a harness, as seen in a video recorded at the Alberto Santos Dumont Association for Research Support where the neurorehabilitation lab is located.

“One previous study has shown that a large percentage of patients who are diagnosed as having complete paraplegia may still have some spinal nerves left intact,” Nicolelis said. “These nerves may go quiet for many years because there is no signal from the cortex to the muscles. Over time, training with the brain-machine interface could have rekindled these nerves. It may be a small number of fibers that remain, but this may be enough to convey signals from the motor cortical area of the brain to the spinal cord.”

Building a foundation at Duke

Since the 1990s, Nicolelis has investigated how populations of brain cells represent sensory and motor information and how they generate behavior, including movements of upper and lower limbs.

In one early experiment carried out with fellow neuroscientist John K. Chapin, Ph.D., Nicolelis used brain-implanted microelectrodes to record the brain activity of rats trained to pull a robotic lever to get a sip of water. Through a brain-machine interface, the rats learned to control the lever using only their brain activity. “They simply produced the correct brain activity and the robotic arm would bring water to the rat’s mouth without them having to move a muscle,” Nicolelis said. “With training, animals stopped producing overt behavior and started relying on brain activity.” 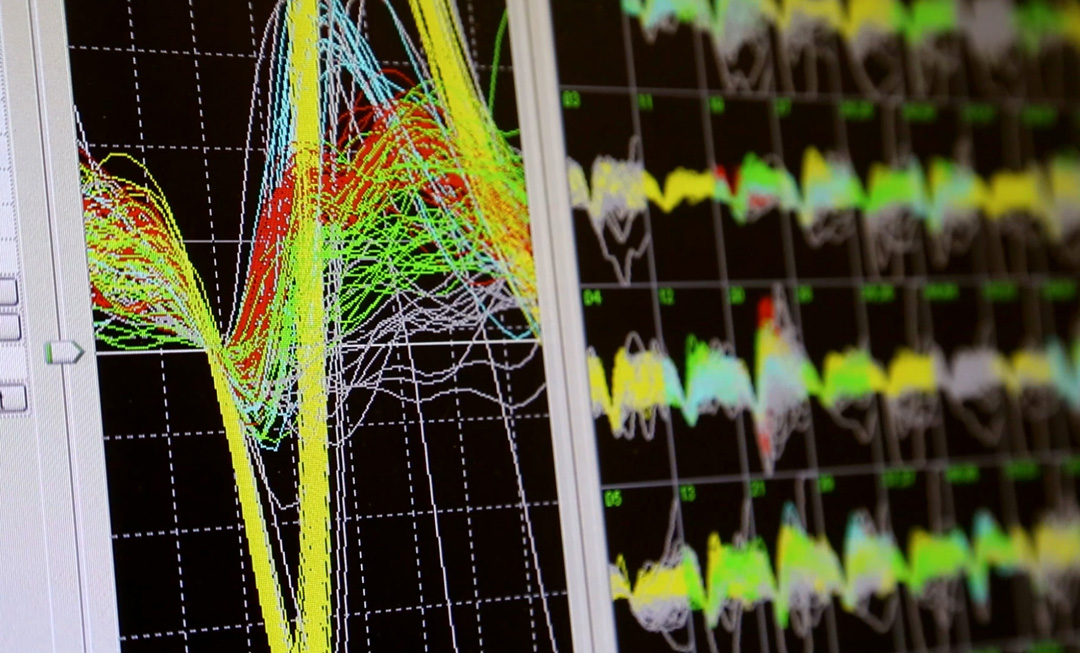 In later endeavors, Nicolelis trained rhesus monkeys to use brain-machine interfaces to control robotic limbs, and later, the 3-D movements of an avatar — animated versions of themselves on a digital screen. The animals soon learned they could control the movements by mentally conceiving them; there was no need to physically move. The rhesus monkeys later learned to walk on a treadmill with robotic legs controlled by their brains. They also learned they could use thought to propel a small electric wheelchair toward a bowl of grapes.

The Duke experiments with rats and primates built a foundation for the work in human patients, including a 2004 article with Duke neurosurgeon Dennis Turner, M.D., that established a model for recording brain activity in patients when they used a hand to grip a ball with varied force. “It’s important to understand how the brain codes for movement,” Nicolelis said. “We discovered principles of how the brain operates that we wouldn’t have discovered without getting inside the brain.”

Still, Nicolelis said, the goal of these studies was to open doors for better prosthetics and brain-controlled devices for the severely disabled. “Nobody expected we would see what we have found, which is partial neurological recovery of sensorimotor and visceral functions,” he said.

The Walk Again Project has brought together more than 100 scientists from 25 countries, who first made news at the 2014 World Cup in São Paulo when Julian Pinto, a young paraplegic man, using a brain-controlled robotic exoskeleton, was able to kick a soccer ball during the opening ceremony.

The Walk Again Project also launched the neuro-rehabilitation study in São Paulo that year. The eight patients spent at least two hours a week using brain-machine interfaces, or devices controlled through their brain signals. All began the program by learning how to operate their own avatar, or digital likeness, in a virtual reality environment. The patients wore fitted caps lined with 11 non-invasive electrodes to record their brain activity through EEG. Initially, when participants were asked to imagine walking in the virtual environment, scientists didn’t observe the expected signals in the areas associated with motor control of their legs. “If you said, use your hands, there was modulation of brain activity,” Nicolelis said. “But the brain had almost completely erased the representation of their lower limbs.”

After months of training, scientists began to observe the brain activity they expected to see when the patients’ thought about moving their legs. “Basically, the training reinserted the representation of lower limbs into the patients’ brains,” Nicolelis said.

As they progressed, patients graduated from virtual reality to more challenging equipment that required more control over their posture, balance and ability to use their upper limbs, including two commercially available walking devices used in some physical therapy centers in the U.S.: the ZeroG and the Lokomat. Both use overhead harnesses to support a patient’s weight as they build strength and proper gait after paralysis due to injury or neurological conditions such as stroke.  The patients rotated through other training systems that applied robotics, including the exoskeleton Pinto wore at the 2014 World Cup.

During most of their training, the participants also wore a sleeve equipped with touch-technology called haptic feedback to enrich the experience and train their brains, Nicolelis said. Haptics use varied vibrations to offer tactile feedback, much like the buzzing jolts or kickbacks gamers feel through a handheld controller.

Each sensation is unique. So when the avatar walked on sand, the patient felt a different pressure wave on the forearm than when they walked on grass or asphalt, Nicolelis said.“The tactile feedback is synchronized and the patient’s brain creates a feeling that they are walking by themselves, not with the assistance of devices,” Nicolelis said. “It induces an illusion that they are feeling and moving their legs. Our theory is that by doing this, we induced plasticity not only at the cortical level, but also at the spinal cord.”

Nearly all of the patients described in the study have continued their rehabilitation, now exceeding two years of training, Nicolelis said. He and colleagues plan to publish additional data about participants’ continued progress. They also plan to create a new trial with patients who suffered more recent spinal cord injuries to see whether quicker treatment can lead to faster or better results.

The team also continues efforts to adapt technologies that are accessible for patients around the world who don’t have access to physical therapy centers with the latest equipment. Perhaps the best answer is haptic sleeves, which by comparison are affordable and something a patient could use at home, Nicolelis said.

Scientific Reports will make the manuscript available for download after the embargo lifts.

This study was funded by grants from the Brazilian Financing Agency for Studies and Projects (FINEP 01·12·0514·00), Brazilian Ministry of Science, Technology and Innovation, and the Itaú Bank. The authors list additional acknowledgements in the manuscript. They declared no competing financial interests related to this work.