Recently, Parker Hannifin conducted a series of in-depth interviews with engineers working for clinical diagnostic and analytical chemistry instrument manufacturers. Many of the questions asked addressed the kinds of component performance improvements engineers hoped to incorporate into their next generation of instruments. Several common themes emerged from this research.

Theme #1: The need to simplify fluidic circuits and shorten or eliminate transfer lines

Because of their size and weight, syringe and piston pumps typically can’t be placed on a motion system at the point of dispense, so they end up “buried” within the instrument and require the use of transfer lines of a meter or more in length, which inevitably compromises the pump’s precision and accuracy to some degree. 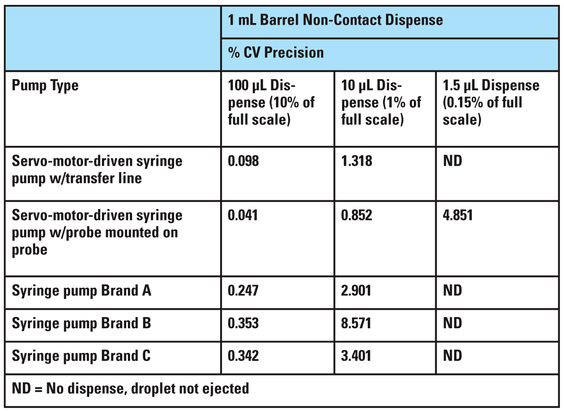 Parker researchers evaluated 30mm (half height) syringe pumps from the three leading pump makers and compared their respective performances with that of a next-generation servo-motor-driven syringe pump (Table 1). At roughly one-third the size and weight of standard 30mm syringe pumps, these new pumps (Figure 1) can be easily mounted on a motion system at the point of dispense. 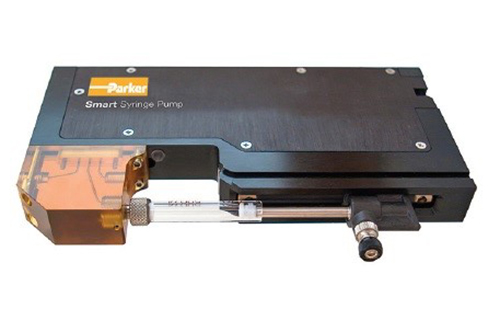 Figure 1. The latest generation of servo-motor-driven syringe pumps, like the Smart Syringe Pump from Parker Precision Fluidics Division shown here, are smaller and lighter than earlier designs, making it possible to mount them directly on a motion system at the point of dispense.

Theme #2: The need to improve fluidic precision through higher resolution

Instrument manufacturers have been hard at work reducing liquid volumes used in sampling and reagent addition. Unfortunately, implementing this low volume strategy using current pump technologies is far from simple. For example, the sampling operation in most instruments requires high precision and accuracy to ensure the correct amount of sample is introduced into the instrument. An error in sample volume typically creates a commensurate error in the results the instrument outputs. Many OEMs are specifying sample and reagent volumes as low as 1 to 4 µL. At such low volumes, the level of precision required stretches the limits of most pump technologies.

The typical strategy to overcome this is to use a smaller-volume syringe barrel or liquid head so that the dispense is spread over many more steps, making the pump’s resolution less critical. Unfortunately, this leads to two problems:

Most syringe and piston pumps feature 2,000- to 3,000-step resolution, which can be increased to 20,000-30,000 steps by micro-stepping (although at the expense of accuracy). In contrast, the latest syringe pump designs offer 228,495 steps of resolution, so the step resolution is 0.22 nL when using a 50 µL syringe barrel.

Theme #3: The need to prevent pulsation at low flow rates

While sample and reagent quantities are getting smaller, the desired flow rates are also decreasing. Typically, a decreased flow rate is accompanied by the use of fluid passageways with smaller diameters and shorter run lengths. This combination can increase throughput by moving liquids more quickly over shorter distances and accelerating chemistries. Moving smaller amounts of liquids precisely can often exceed the capabilities of older pump technologies. Most syringe and piston pumps use stepper motors, which work by breaking the motion down into discrete steps. At high speeds, these steps are virtually undetectable; however, at lower speeds, the motor starts and stops in small steps, which is known as “clocking.” When is stepper motor is driving a pump, clocking leads to pulsations in the flow, which can create serious problems. High sensitivity sensors exposed to pulsations often produce erroneous data. Pulsation can also create “noise” that makes it difficult to differentiate the sample results from the background. In contrast, servo-motor-based drive trains like the ones used in the latest syringe pump designs offer smooth motion without clocking, even at very low speeds, which translates into non-pulsatile flow at low flow rates, making them ideal for many microfluidic applications.

Pushing dispense volumes down to the low microliter and nanoliter levels challenges existing fluidic systems because the fluid dynamics of these small volumes can make it difficult to ensure the entire liquid volume being dispensed makes its way into the target vessel. Most stepper-motor-driven pumps lack the resolution to deliver small amounts of liquid accurately. Furthermore, the small volume of liquid involved limits the velocity of the liquid being moved, so there’s insufficient momentum and deceleration to overcome the surface tension that retains the droplet at the end of the probe; by compromising the reproducibility of the droplet clearing, this also compromises the accuracy and precision of the measurement. The next-generation syringe pump design employs a servo motor capable of much higher acceleration, running speed, and deceleration than stepper-motor-driven pumps.

One of the most commonly stated themes that emerged from our interviews with lab instrument engineers was the need to perform a low volume non-contact dispense reliably, along with aspiration capability. As described previously, we compared the performance of a 30mm servo-motor-driven syringe pump with three 30mm stepper-motor-driven syringe pumps from leading manufacturers (see Table 1).

The stepper-motor-driven pumps tended to have stall condition issues with high resolution set points combined with high speeds due to motor torque limitations. To optimize low volume dispense performance, a swaged design was used to improve the droplet cut-off characteristics. The same probe was used with all of the pumps tested. 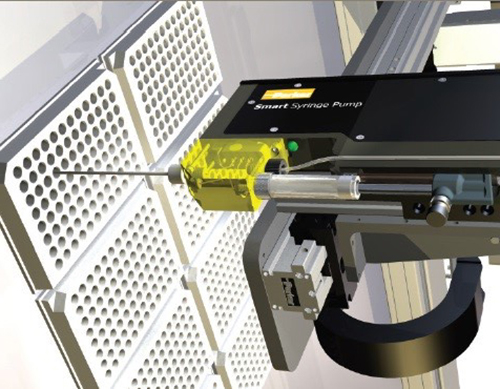 Figure 2. Mounting a probe directly on the pump, as shown here, allows delivering small volumes of liquid with high precision.

Although none of the pumps analyzed could dispense droplets non-contact at the lowest volume (1.5 µL) when using a transfer line, the servo-motor-driven syringe pump proved capable of delivering this volume with good precision when the transfer line was eliminated by mounting the probe directly on the pump (Figure 2).

If a pump is built into an instrument that is expected to process a million samples a year, this corresponds to at least a million cycles for the pumps involved in sampling or reagent addition. When a pump fails, typically the entire instrument is shut down until it can be replaced. Users struggle with the loss of revenue associated with downtime, which encourages them to choose instruments that they perceive as offering higher reliability.

The drives for the newest generation of syringe pumps are designed to ensure a minimum life of 5 million cycles. In fact, ongoing life testing of a population of these pumps has shown they are capable of operating continuously for three years and have exceeded 25 million cycles.

Syringe pumps generally employ a shear valve to direct fluid flow between aspirate to dispense operations. Unfortunately, shear valves are notorious for leaking and seldom achieve a million cycles without problems, so even if the drive is still operating after a million cycles, there is a good chance the instrument will need to be shut down to replace the shear valve. In contrast, the newest syringe pump designs employ a long-life rocker isolation valve that is rated to 10 million cycles.

For engineers working for manufacturers of clinical diagnostic and analytical chemistry instruments, new pump options are emerging that promise higher performance on multiple levels. As pump manufacturers come to accept that their customers are demanding higher precision, accuracy, resolution, and long-term reliability, as well as a non-pulsing operation at low flow levels, more of these manufacturers will eventually make the investments necessary to catch up with the needs of today’s demanding applications.