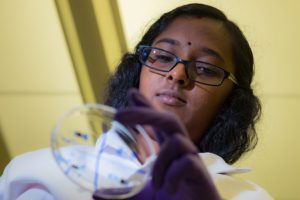 Graphene may also find use as contrast agents for MRI, according to new research from Rice University.

Graphene, the atomically thin sheets of carbon that materials scientists are hoping to use for everything from nanoelectronics and aircraft de-icers to batteries and bone implants, may also find use as contrast agents for magnetic resonance imaging (MRI), according to new research from Rice University.

“They have a lot of advantages compared with conventionally available contrast agents,” Rice researcher Sruthi Radhakrishnan said of the graphene-based quantum dots she has studied for the past two years. “Virtually all of the widely used contrast agents contain toxic metals, but our material has no metal. It’s just carbon, hydrogen, oxygen and fluorine, and in all of our tests so far it has shown no signs of toxicity.”

The initial findings for Rice’s nanoparticles—disks of graphene that are decorated with fluorine atoms and simply organic molecules that make them magnetic—are described in a new paper in the journal Particle and Particle Systems Characterization.

Pulickel Ajayan, the Rice materials scientist who is directing the work, said the fluorinated graphene oxide quantum dots could be particularly useful as MRI contrast agents because they could be targeted to specific kinds of tissues.

“There are tried-and-true methods for attaching biomarkers to carbon nanoparticles, so one could easily envision using these quantum dots to develop tissue-specific contrast agents,” Ajayan said. “For example, this method could be used to selectively target specific types of cancer or brain lesions caused by Alzheimer’s disease. That kind of specificity isn’t available with today’s contrast agents.”

MRI scanners make images of the body’s internal structures using strong magnetic fields and radio waves. As diagnostic tests, MRIs often provide greater detail than X-rays without the harmful radiation, and as a result, MRI usage has risen sharply over the past decade. More than 30 million MRIs are performed annually in the U.S.

Radhakrishnan said her work began in 2014 after Ajayan’s research team found that adding fluorine to either graphite or graphene caused the materials to show up well on MRI scans.

All materials are influenced by magnetic fields, including animal tissues. In MRI scanners, a powerful magnetic field causes individual atoms throughout the body to become magnetically aligned.

A pulse of radio energy is used to disrupt this alignment, and the machine measures how long it takes for the atoms in different parts of the body to become realigned. Based on these measures, the scanner can build up a detailed image of the body’s internal structures.

MRI contrast agents shorten the amount of time it takes for tissues to realign and significantly improve the resolution of MRI scans. Almost all commercially available contrast agents are made from toxic metals like gadolinium, iron or manganese.

“We worked with a team from MD Anderson Cancer Center to assess the cytocompatibility of fluorinated graphene oxide quantum dots,” Radhakrishnan said. “We used a test that measures the metabolic activity of cell cultures and detects toxicity as a drop in metabolic activity. We incubated quantum dots in kidney cell cultures for up to three days and found no significant cell death in the cultures, even at the highest concentrations.”

The fluorinated graphene oxide quantum dots Radhakrishnan studies can be made in less than a day, but she spent two years perfecting the recipe for them. She begins with micron-sized sheets of graphene that have been fluorinated and oxidized.

When these are added to a solvent and stirred for several hours, they break into smaller pieces. Making the material smaller is not difficult, but the process for making small particles with the appropriate magnetic properties is exacting.

Radhakrishnan said there was no “eureka moment” in which she suddenly achieved the right results by stumbling on the best formula. Rather, the project was marked by incremental improvements through dozens of minor alterations.

“It required a lot of optimization,” she said. “The recipe matters a lot.”

Radhakrishnan said she plans to continue studying the material and hopes to eventually have a hand in proving that it is safe and effective for clinical MRI tests.

“I would like to see it applied commercially in clinical ways because it has a lot of advantages compared with conventionally available agents,” she said.

Additional co-authors include Parambath Sudeep and Chandra Tiwary, both of Rice; Atanu Samanta and Abhishek Singh, both of the Indian Institute of Science at Bangalore; Kiersten Maldonado and Sendurai Mani, both of MD Anderson; and Ghanashyam Acharya of Baylor College of Medicine.

The research was supported by the Hamill Foundation through a Hamill Innovation Award to Rice’s Institute of Biosciences and Bioengineering, the Air Force Office of Scientific Research, the Indian Institute of Science at Bangalore’s Supercomputing Education Research Centre and India’s Indo-US Science and Technology Forum.