Massachusetts Institute of Technology (MIT) and Brigham and Women’s Hospital researchers have demonstrated that they can deliver strands of RNA efficiently to colon cells, using bursts of ultrasound waves that propel the RNA into the cells. Using this approach, the researchers dramatically turned down the production of a protein involved in inflammatory bowel disease (IBD), in mice.

“What we saw in this paper was the ultrasound can enable rapid delivery of these molecules,” says Carl Schoellhammer, a postdoc at MIT’s Koch Institute for Integrative Cancer Research and the study’s lead author. “In this case it was proinflammatory molecules that we were shutting off, and we saw tremendous knockdown of those proteins.”

Delivering nucleic acids such as RNA to cells to dampen or boost a target protein is a strategy that holds potential to treat many diseases, but delivering the molecules to the right destination has proven challenging. The researchers demonstrated a simple method that does not require formulation or encapsulation of the RNA, and they believe their technique could be applied to treat other gastrointestinal (GI) disorders as well as diseases of other parts of the body.

“Having the ability to deliver large amounts of this material, which is not modified in any way, really opens up the possibility to have a positive impact on patients down the line,” says Giovanni Traverso, a research affiliate at the Koch Institute and a gastroenterologist and biomedical engineer at Brigham and Women’s Hospital.

Traverso and Robert Langer, the David H. Koch Institute Professor at MIT and a member of the Koch Institute, are the senior authors of the paper, which appears in the journal Gastroenterology. 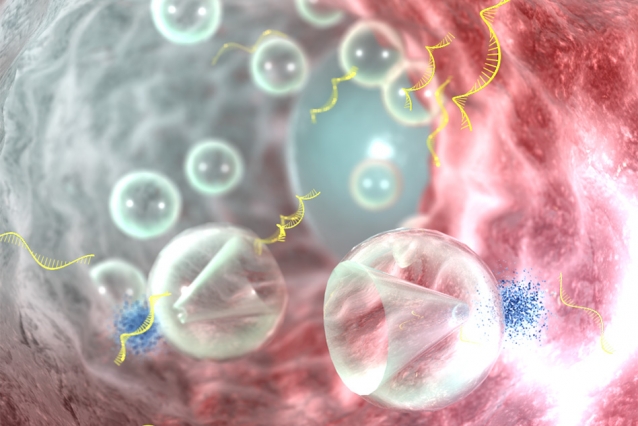 MIT engineers have shown that they can use short bursts of ultrasound to efficiently deliver RNA into cells. (Credit: Ella Maru Studio)

In 2015, the same research team reported using ultrasound waves to enhance the delivery of drugs to the GI tract. The researchers then set their sights on delivering nucleic acids such as RNA, which are much larger than the small-molecule drugs they used in their previous study. RNA molecules are rapidly degraded in the GI tract and are more challenging to deliver because the RNA has to get inside cells to have an effect.

Scientists are very interested in delivering RNA to cells because snippets of RNA known as short interfering RNA (siRNA) can be used to turn off specific genes. However, because RNA is so prone to breakdown in the GI tract, most efforts to deliver it have focused on packaging it into particles or synthesizing nuclease-resistant forms to protect it from degradation.

In this study, the researchers found they needed no protective coating or specialized chemical modifications for the RNA because the ultrasound waves escort it into cells so rapidly.

Ultrasound propels drugs and other molecules such as RNA into cells through a phenomenon called transient cavitation. At low frequencies, ultrasound produces tiny bubbles in a solution, and when those bubbles burst, they produce tiny jets that push drugs or RNA into cells.

The researchers used this approach to deliver short strands of RNA that block production of an inflammatory protein called tumor necrosis factor alpha (TNFα), in mice with colitis, a form of IBD.

The unmodified RNA was delivered to the colon by enema in a solution of water. Simultaneously, the researchers used a small probe to deliver a 0.5-second burst of ultrasound, with frequencies ranging from 20 to 100 kilohertz.

Mice that received RNA along with ultrasound experienced a sevenfold to tenfold reduction in TNFα levels, and their inflammation nearly disappeared. The ultrasound exposure did not produce any adverse side effects. As expected, RNA administered alone had no affect.

The researchers also showed that they could use this approach to deliver messenger RNA (mRNA), which is larger than siRNA and encodes protein-coding genes. In this study, the researchers delivered a firefly gene for bioluminescence to demonstrate the potential applicability of this technology. In the future the method could be used to induce cells to produce proteins such as enzymes that could help patients with diseases caused by enzyme deficiencies.

Bruce Sands, chief of the Division of Gastroenterology at the Icahn School of Medicine and Mount Sinai Health System, says this approach could have applications for a wide range of GI diseases.

“This approach has the potential to enhance both the efficacy and the safety of blocking current targets, such as TNF, by allowing both reduction of the effective dose and systemic exposure. However, much additional work needs to be done to bring ultrasound-mediated delivery of RNA-based therapies to practical clinical application,” says Sands, who was not involved in the research.

The researchers have formed a company called Suono Bio to further develop the technology, and they expect IBD, which affects approximately 1.6 million Americans, to be one of their first targets.

“There aren’t that many treatment options for these patients,” Traverso says. “The ability to deliver RNA opens up essentially the entire genome for potential targets.”

Researchers could use this approach to rapidly test possible siRNA targets, since it doesn’t require spending a lot of time developing ways to package the RNA for delivery.

“Now you can take the RNA strand, and without doing any formulation, you can immediately put it into an animal, hit that target, and get your readout of whether it has any effect on disease,” says Schoellhammer, who won the 2016 Graduate Gold Medal at the Collegiate Inventors Competition and a 2015 Lemelson-MIT Student Prize for this research.

The researchers are now working on miniaturized devices that would carry drugs or RNA in a reservoir and also emit ultrasound waves, for delivery to the stomach or other parts of the GI tract.

“Eventually we think we will get to a fully ingestible capsule for the oral delivery of almost anything,” Schoellhammer says.

The research was funded by the National Institutes of Health, a Max Planck Research Award, and a Koch Institute Quinquennial Cancer Research Fellowship.