Remember the bionic drumming arm that made headlines a few years ago, transforming Atlanta Institute of Music and Media student and amputee Jason Barnes into basically the world’s fastest drummer? If not, let me enlighten you to the face-melting drumming with this video.

That one, if you remember, was invented by Georgia Tech professor Gil Weinberg. And apparently he’s graduated from making two-armed drummers to making three-armed drummers. Though it does seem like overkill to do this, Weinberg’s intentions are noble: he wants to push the limits of what humans can do using a two-foot long “smart arm” attached to the shoulder.

Before I get into the medicine, let’s talk about what it can do for the music. According to Weinberg, the arm learns what to play based on the music it hears, and improvises according to the tempo and rhythm. Whether the musician plays slowly or quickly, the bionic arm will adjust its speed.

Equipped with software that essentially gives it human proprioception, the arm’s built-in accelerometers detect distance and position of the drums. The arm’s on-board motors keep the stick parallel, moving with the fluid motion rivalling a human arm thanks to motion capture technology.

The “augmented human” is a popular topic to explore when talking about wearable technology like this—the arm allows drumming that even a virtuoso wouldn’t be able to mimic. “If you have a robotic device that is part of your body, it’s a completely different feeling from working alongside a regular robot,” said Weinberg in a Georgia Tech article. “The machine learns how your body moves and can augment and complement your activity. It becomes a part of you.”

But Weinberg envisions the arm’s utility to move from the studio into potentially the clinic, or even the operating room. Clinicians are definitely among the top professionals who would benefit from an extra arm!

“Imagine if doctors could use a third arm to bring them tools, supplies or even participate in surgeries. Technicians could use an extra hand to help with repairs and experiments,” he said in the article. “Music is based on very timely, precise movements. It’s the perfect medium to try this concept of human augmentation and a third arm.” 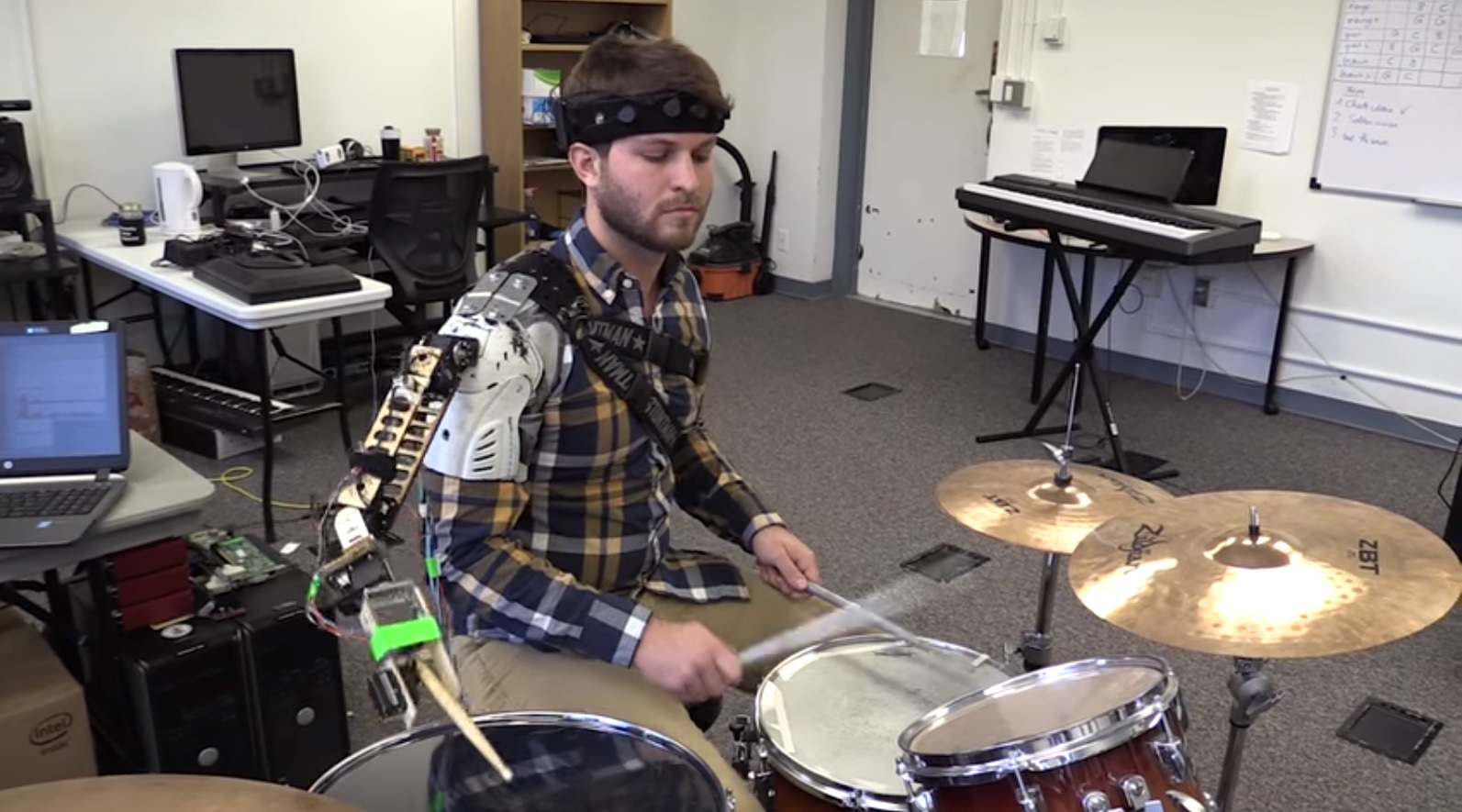 Doctors can also melt faces on the drums, if they wish. (Credit: Georgia Tech)

Next on the list of superpowers to equip the arm with is an EEG headband. Weinberg’s team is already testing one that can interpret a drummer’s pattern of brain activity—they hope to pinpoint brain patterns that enable the arm’s reaction upon imagining changing tempo or instruments.

That’s probably a long way off, as is the capacity for the arm to make its way into the clinic. But it’s nice to see that extraneous robotic arms are being used for real-world applications instead of just robot battles!