The human brain was initially used for basic survival tasks, such as staying safe and hunting and gathering. Yet, 200,000 years later the same human brain is able to learn abstract concepts, like momentum, energy and gravity, which have only been formally defined in the last few centuries.

New research from Carnegie Mellon University has now uncovered how the brain is able to acquire brand new types of ideas. Published in Psychological Science, scientists Robert Mason and Marcel Just used neural-decoding techniques developed at CMU to identify specific physics concepts that advanced students recalled when prompted. The brain activation patterns while thinking about the physics concepts indicated that all of the students’ brains used the ancient brain systems the same way, and the patterns revealed how the new knowledge was formed — by repurposing existing neural systems.

The findings could be used to improve science instruction. 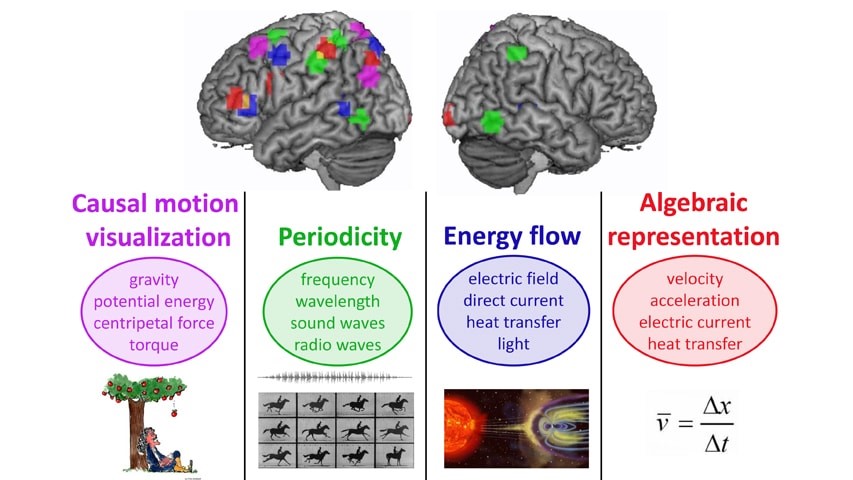 “If science teachers know how the brain is going to encode a new science concept, then they can define and elaborate that concept in ways that match the encoding. They can teach to the brain by using the brain’s language,” said Mason, a senior research associate in the Dietrich College of Humanities and Social Sciences’ Department of Psychology.

Mason and Just, the D. O. Hebb University Professor of Psychology, recruited nine advanced physics and engineering students to participate in the study. Each student’s brain was scanned at CMU’s Scientific Imaging and Brain Research (SIBR) Center while they were shown a set of 30 familiar concepts, such as gravity, entropy, inertia, refraction and velocity.

Using a machine learning program, Mason and Just were able to identify which of the 30 concepts a student was thinking about because the thought of each concept created its own brain activation pattern. They also could break down the patterns into the different neural pieces used to build the full concepts.

The research showed for the first time how learning physics concepts is accomplished by repurposing neural structures that were originally used for general everyday purposes. More specifically, the brain is able to learn physics concepts because of its ability to understand the four fundamental concepts of causal motion, periodicity, energy flow and algebraic (sentence-like) representations.

Brain systems that process rhythmic periodicity when hearing a horse gallop also support the understanding of wave concepts in physics. Similarly, understanding gravity involves visualizing causal motion, like an apple falling from a tree; energy flow uses the same system as sensing warmth from a fire or the sun; and understanding how one concept relates to others in an equation uses the same brain systems that are used to comprehend sentences describing quantities.

“This is why humans have been able to move ahead and innovate — because we can use our brain for new purposes,” Just said. “Human brains haven’t changed much over a few thousand years, but new fields like aeronautics, genetics, medicine and computer science have been developed and continuously change. Our findings explain how the brain is able to learn and discover new types of concepts.”

These findings are examples of the many brain research breakthroughs at Carnegie Mellon. CMU has created some of the first cognitive tutors, helped to develop the Jeopardy-winning Watson, founded a groundbreaking doctoral program in neural computation, and is the birthplace of artificial intelligence and cognitive psychology. Building on its strengths in biology, computer science, psychology, statistics and engineering, CMU launched BrainHub, an initiative that focuses on how the structure and activity of the brain give rise to complex behaviors.

The Office of Naval Research funded this study. Read the full study.