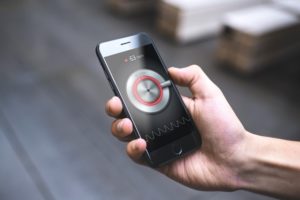 MIT Media Lab spinout Cardiio has developed a mobile app that uses a smartphone camera to detect facial signs of a heart arrhythmia associated with strokes. [Image from Cardiio]

Maybe a selfie can help after all. The Media Lab at Massachusetts Institute of Technology has developed a mobile app that uses a smartphone’s camera to detect signs of a heart arrhythmia.

Evaluating a person’s facial expressions is one of the ways to determine if someone is experiencing a stroke. The MIT app measures and analyses small changes of reflected light on a person’s skin which may happen from an underlying pulse.

The new app is a spinoff from the fitness app Cardiio that launched in 2012. The app calculates heart rate based on facial light reflection. As a user’s heart beats, the volume of blood in a user’s vessels also increases. Hemoglobin in blood absorb’s light and decreases the light that is reflected by the skin. Cardiio uses that knowledge to track the changes in the skin to calculate a heartbeat.

Cardiio has taken from that light-reflection data to create a new app that detects irregular heartbeat patterns of atrial fibrillation (AF), which is a common type of heart arrhythmia that often leads to stroke.

The new app, called Cardiio Rhythm, is only available for research use right now but has been confirmed as working in several academic papers. The app’s developers hope to make it available for consumers for early heart arrhythmia detection.

However, it won’t necessarily be able to officially diagnose heart arrhythmias; that still requires a health care professional. The app could act as an early screening tool for AF, though, according to a press release.

“We aim to develop algorithms that unlock clinical insights from [biometric] data collected from commonly available devices such as smartphones and wearables,” said Cardiio co-founder and CEO Ming-Zher Poh, PhD, a former Media Lab research affiliate who co-developed the app. “That enables people to learn more about their health and … take more control of their health.”

AF is an irregular heartbeat that causes blood clots, stroke, heart failure and other heart complications, according to the American Heart Association. The CDC estimates that 2.7 million to 6.1 million people have AF.

“The risk of AF increases with age, and the U.S. is an aging population, so it’s a growing problem,” Poh said.

Usually AF is detected by attaching electrodes to a patient’s chest during an electrocardiogram (ECG) to measure the electrical impulse of someone’s heartbeat and detect irregularities.

“But there’s a chance the electrocardiogram won’t pick up [AF] if your heart rhythm is not irregular during a routine checkup at a clinic,” Poh said. “Sometimes people don’t discover they have this irregular heart rhythm until after they suffer a stroke.”

Cardiio Rhythm instead uses a smartphone’s camera to detect irregular heartbeats. The app focuses on someone’s face, or the user can put their finger on the camera. As the heart beats, the app is able to detect blood volume data in pulse waveforms.

In a 2016 study, 85 hospital patients used Cardiio Rhythm to screen for AF immediately after receiving an ECG. The app was 95% accurate as an ECG for the detection of AF. The study was presented at the American Heart Association’s Scientific Sessions.

“We will release more publications in the future, because validation is very important,” said Poh, who plans to set the app up to work toward regulatory clearance.

“On one hand, you have smartphone-based health apps, or smart watches, or fitness trackers that generate a lot of biometric data but offer somewhat limited insights. On the other hand, traditional FDA-cleared medical devices can aid physicians in diagnosis but are not as easily accessible to consumers,” Poh said. “There needs to be a transition from fitness-oriented devices to more medical applications in order to improve health outcomes. We see ourselves providing the tools to make that transition possible.”