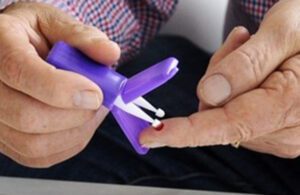 Stop me if you’ve heard this one before: Researchers say they can analyze multiple biomarkers to measure a patient’s health using a single drop of blood.

Don’t pull out the black turtleneck yet. The news comes from Stanford Medicine, where researchers said they’ve developed a new approach combining multi-omics technologies (such as genomics, epigenomics, transcriptomics, proteomics and metabolomics) with a microsampling fingerstick device.

Patients could collect their own blood drop and mail it to the lab for analysis of thousand of molecules such as proteins, fats, by-products of metabolism and inflammatory markers. The technology could have potential for new or faster disease diagnosis.

Stanford said technology is different than what was promised by Theranos founder Elizabeth Holmes and Theranos President Sunny Balwani, who have both been convicted on federal felony fraud charges.

“The research sounds similar to a well-known approach promoted in the past for testing a single drop of blood, but there are important differences,” Stanford said in a university article that didn’t mention Theranos by name. “While the earlier approach was based on replicating existing diagnostic tests, multi-omic microsampling uses a different type of data analysis based on a technology called mass spectrometry, which sorts molecules based on their mass and electronic charge. In addition, the data analysis is performed in a lab, not in a portable box.”

“For the study, we asked participants to take blood samples five times in just four hours,” he said. “Traditionally, that would have meant putting in a catheter and pulling out a lot of blood each time. By the fifth draw, your participants would have less iron and fewer red blood cells.”

The researchers were able to measure the levels of 128 proteins, 1,461 metabolites and 776 lipids from each microsample. Their results were comparable to a traditional blood draw for most molecules.

Applications of the multi-omic microsampling research

The researchers used the multi-omic microsampling technology to analyze metabolic and inflammatory responses to food. They also tried sampling Snyder’s blood every hour or two during his waking hours over a week. At the same time, he wore four different smart watches and a continuous glucose monitor to track his vital signs and activity, including sleep and food intake.

Their studies indicated multi-omic microsampling could be used to identify infections, measure drug response and otherwise understand small changes in a patient’s body. It might also help offer an early warning of disease and diagnose conditions.

“The bottom line is that we can get a really deep profile of a person’s metabolic and immune health, all through the convenience of a home test,” Snyder said.

Tell Us What You Think! Cancel reply