A virtual reality simulator specifically designed to help teenagers with autism spectrum disorder, or ASD, learn how to drive has been developed by researchers at Vanderbilt University.

According to current estimates, one in every 68 children in the United States has ASD. It is considered a life-long diagnosis. There is a great deal of individual differences in the nature and severity of the disorder, but it generally consists of impairments in social and communication skills combined with rigid, repetitive behaviors.

“In the past 15 years, there has been such an emphasis, such an appropriate emphasis, on early identification and early treatment of children with ASD,” said Amy Weitlauf, a psychologist who specializes in autism. “Well, now many of these children are adolescents and adults, so we have started to work on providing them with the support they need to become independent adults. And one of those key life skills for independence is, for many people, the ability to drive.”

Surveys indicate that about 30 percent of adolescents with ASD either drive or want to drive. That is why Weitlauf, who is an assistant professor of pediatrics at Vanderbilt University Medical Center and part of the Vanderbilt University Kennedy Center, is collaborating with a team of Vanderbilt engineers to develop a special adaptive virtual-reality driving environment for individuals with ASD.

The Vanderbilt VR Adaptive Driving Intervention Architecture (VADIA) is specifically designed to teach adolescents with ASD the basic rules of the road, and gathers information about the unique ways that they react to driving situations. This allows the system to alter driving scenarios with varying degrees of difficulty to provide users with the training they need while keeping them engaged in the process. Ultimately, it may also help screen individuals whose deficits are too severe to drive safely.

“A number of ‘high functioning’ individuals with ASD do drive and studies have shown that when they are learning they tend to make certain kinds of mistakes more often than other beginning drivers. So how you train them is very important,” said Nilanjan Sarkar, the professor of mechanical engineering and director of the Robotics and Autonomous Systems Lab. 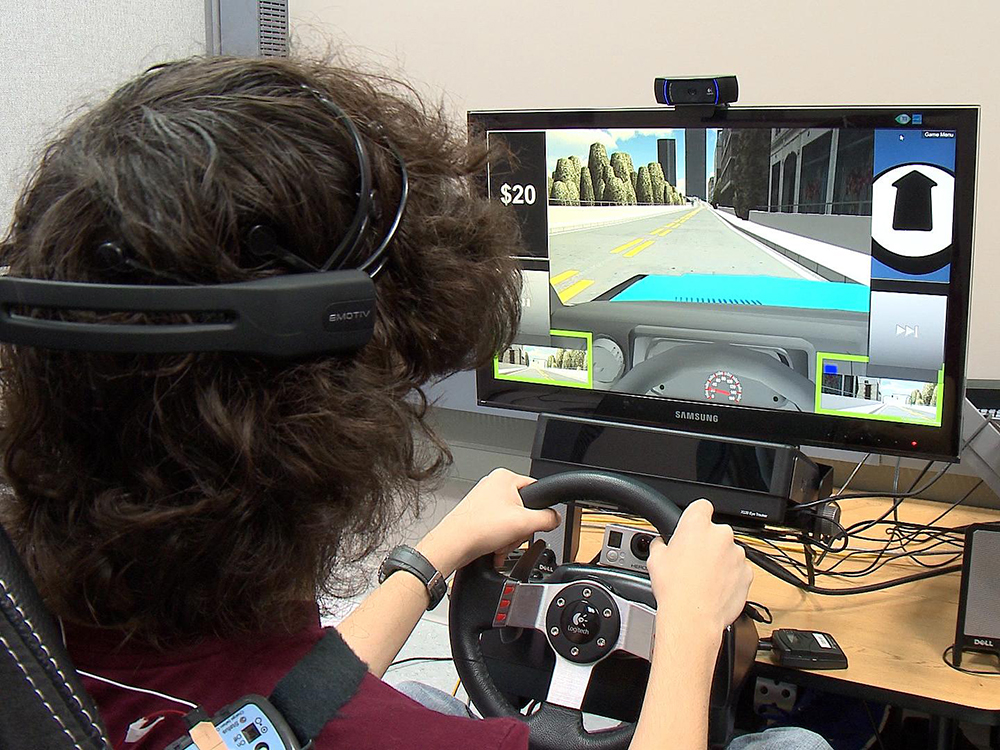 The research setup consists of an automotive-style bucket seat, steering wheel, brake and gas pedals in front of a large, flat screen display on a height-adjustable table. The black box sitting directly below the screen is an eye-tracker that keeps track of where the driver is looking.

The simulator portrays a city with four different districts—downtown, residential, industrial and arboreal—that is ringed by a freeway. It is programmed with four basic types of driving scenarios: turning, merging, speed and laws. Speed scenarios involve those that require the driver to change their speed, such as entering or leaving school zones, street maintenance areas and changes in posted speed limit. Laws scenarios involve obeying traffic signs, such as stop and yield.

The software includes a number of factors that can be changed to increase or decrease the degree of difficulty involved. It can vary the speed and aggressiveness of the autonomous vehicles the driver encounters. It can vary weather conditions from sunny, overcast and rainy. It can also alter the responsiveness of the brake pedal, gas pedal and steering wheel to mimic the effect of slippery or dry pavement.

The system is designed to give drivers immediate feedback when they make mistakes. In its basic, performance mode, the simulator reacts when the driver makes a performance error such as exceeding the speed limit or failing to stop at a red light. The simulation stops and a text message is displayed on the screen and repeated audibly that explains the mistake and corrective steps the driver can take to avoid it.

In its second mode, the simulator not only reacts to performance errors, but it also reacts when the driver fails to pay attention to important elements in the scene, such as stop signs, other vehicles and pedestrians. These objects are marked in the computer and if the eye tracker determines that the driver has not looked at such an object for a period the researchers have determined as adequate, the simulation stops and issues an explanatory error message.