Peter Scannell, E’16, is one of five student engineers working to harness the power of the Oculus Rift virtual reality headset to help stroke patients over­come hemispatial neglect. Also called unilateral visual inattention or hemi-inattention, it’s a neuropsychological condition preventing stroke victims from perceiving stimuli on one side of their body or environment.

“We want to gamify the process of rehabilitation,” Scannell explained at RISE:2016, where the engineers-in-training demoed a prototype of a game integrating the virtual reality headset and a body motion tracking system. 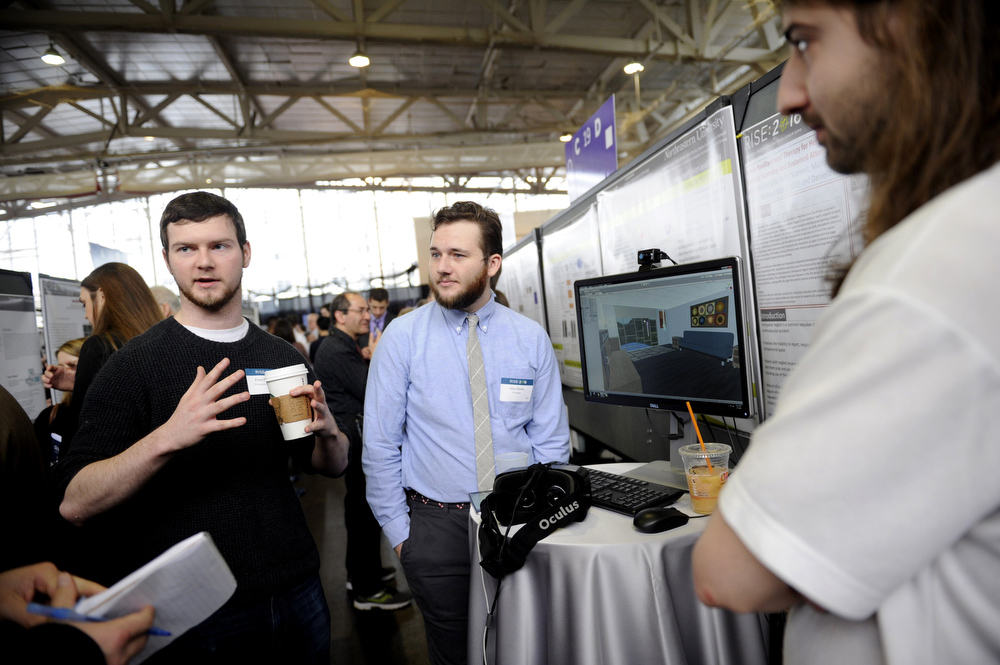 Three stu­dent engi­neers explain how they’re applying the prin­ci­ples of gaming to the process of stroke reha­bil­i­ta­tion. (Credit: Matthew Modoono)

Here’s how it works: Apply the headset, move your head to locate cabinets and drawers to your left, to your right, and in front of you, and then use your hands to open them.

Said team member Jesses Michel, E’16: “Right now, you can do a lot of useful things with the Oculus Rift, especially in terms of physical therapy and brain exercises.”

Under the direction of Waleed Meleis, an associate professor in the Depart­ment of Electrical and Computer Engineering, and Danielle Levac, an assistant professor in the Department of Physical Therapy, Movement, and Rehabilitation Science, the students conducted a needs assessment with physical therapists at the Spaulding Rehabilitation Hospital in Boston. The next step is to conduct a pilot test with a small sample of adults with hemispatial neglect to determine the efficacy of their VR interface.