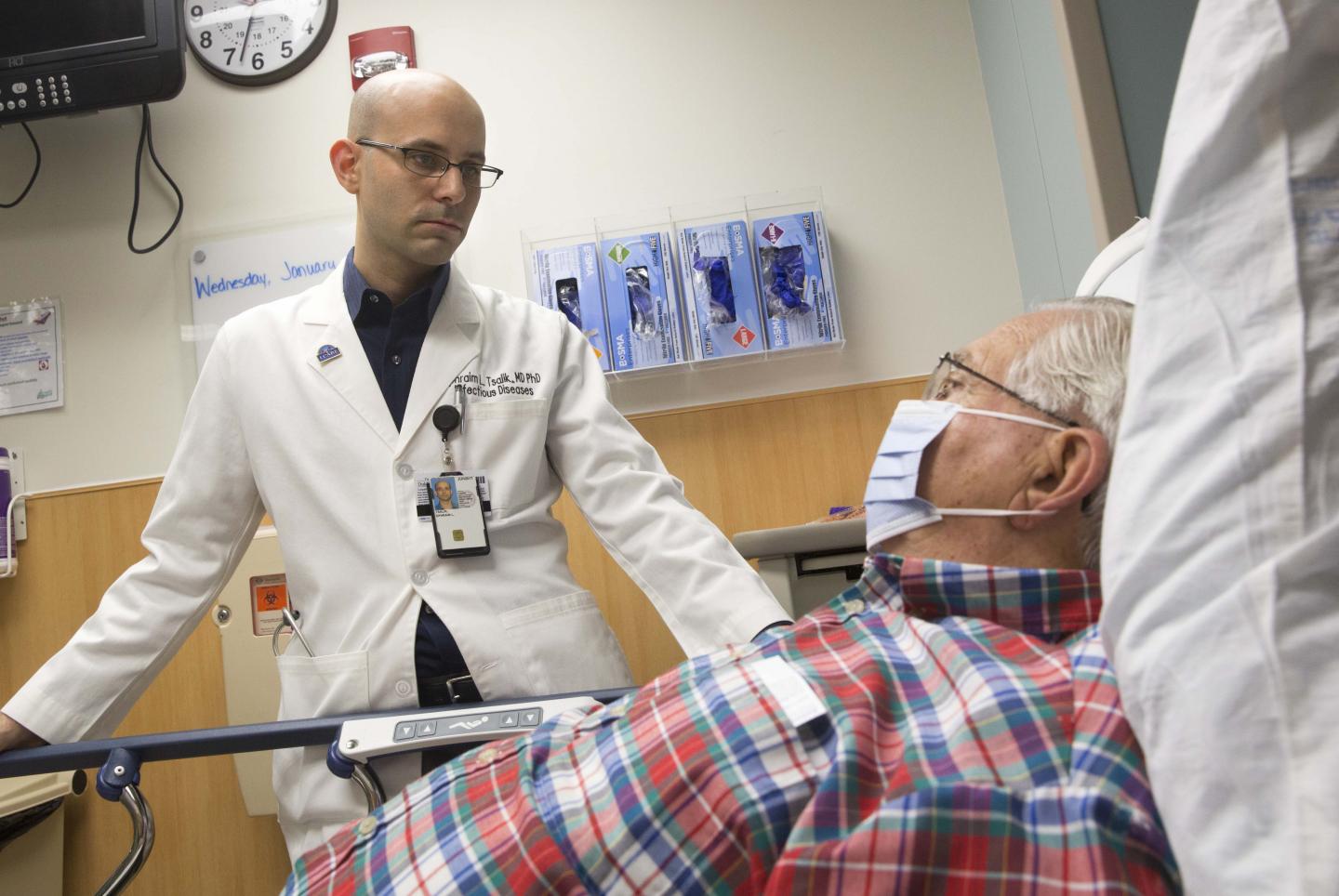 Ephraim Tsalik, M.D., Ph.D., assesses Charles Watts for a respiratory infection in the ER at the Durham VA Medical Center on Wednesday, Jan. 13, 2016. Tsalik, an assistant professor of medicine at Duke and Emergency Medicine provider at the Durham VA, is the lead author in a study from Duke Health in which researchers are fine-tuning a test that can determine whether a respiratory illness is caused by infection from a virus or bacteria so antibiotics can be more precisely prescribed. (Credit: Shawn Rocco/ Duke Health)

Researchers at Duke Health are fine-tuning a test that can determine whether a respiratory illness is caused by infection from a virus or bacteria so that antibiotics can be more precisely prescribed.

The team of infectious disease and genomics experts at Duke has developed what they call gene signatures, patterns that reflect which of a patient’s genes are turned on or off, to indicate whether someone is fighting infection from a virus or bacteria. Results can be derived from a small sample of the patient’s blood.

The signatures were tested in an observational study described in the January 20 issue of Science Translational Medicine. They were found to be 87 percent accurate in classifying more than 300 patients with flu viruses, rhinovirus, several strep bacteria and other common infections, as well as showing when no infection was present.

With these findings, Duke researchers are a significant step closer to developing a rapid blood test that could be used in clinics to distinguish bacterial and viral infections and to guide appropriate treatment.

“A respiratory infection is one of the most common reasons people come to the doctor,” said lead author Ephraim L. Tsalik, M.D., Ph.D., assistant professor of medicine at Duke and emergency medicine provider at the Durham VA Medical Center. “We use a lot of information to make a diagnosis, but there’s not an efficient or highly accurate way to determine whether the infection is bacterial or viral. About three-fourths of patients end up on antibiotics to treat a bacterial infection despite the fact that the majority have viral infections. There are risks to excess antibiotic use, both to the patient and to public health.”

Participants with respiratory problems were enrolled during visits to emergency departments at five hospitals, including Duke, the Durham VA Medical Center and UNC Hospital in Chapel Hill. The technique is more accurate than other tests that look for the presence of specific microbes, the authors report.

“Right now, we can give patients Tamiflu to help them recover from an influenza infection, but for most viral infections, the treatment is fluids and rest until it resolves,” Ginsburg said. “In the next five to 10 years, we will likely see new antiviral medications for common bugs like respiratory syncytial virus (RSV) and even rhinovirus, (the predominant cause of the common cold), and guiding treatment choices will be even more important.”

Ginsburg and colleagues at Duke have been studying gene signatures in respiratory infections for nearly a decade, but only recently has technology allowed scientists to analyze a person’s genetic makeup, 25,000 genes at a time, he said. The team had previously identified gene signatures associated with viral infections, but this is the first study to distinguish non-infectious illnesses and viral from bacterial infections at the patient’s molecular level.

Still, with current technology, measuring a person’s gene expression profile from blood could take as long as 10 hours. Study authors are currently working with developers to create a one-hour test that could be used in clinics.

“The ideal scenario, should this test ultimately be approved for broad use, is you would go to the doctor’s office and receive your results by the time you meet with your provider,” said senior author Christopher W. Woods, M.D., professor of medicine and associate director of Duke’s genomics center. “We are working to develop a test that could be run in most clinical labs on existing equipment. We believe this could have a real impact on the appropriate use of antibiotics and guide the use of antiviral treatments in the future.”