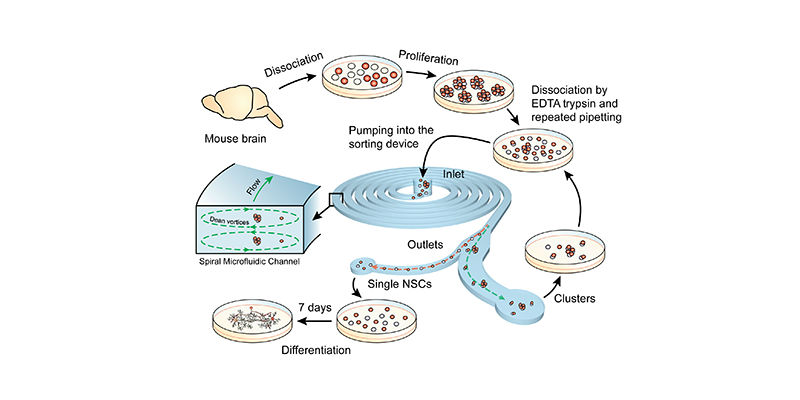 An overview of the process. After the cell sample is pumped through the device, the sorted single cells are collected at the outlet and cultured in a low serum media to promote differentiation.

While there are no cures for neurological diseases such as Alzheimer’s and Parkinson’s, many researchers believe that one could be found in neural stem cells. Unfortunately, scientists do not yet have a full understanding of how these cells behave and differentiate, which has put a roadblock in the path to potential life-saving treatments.

Now a team of Northwestern Engineers has developed a microfluidic device to sort neural stem cell populations, making them easier to study. This new tool could lead to a better understanding of how stem cells function, bringing the world one step closer to fighting debilitating diseases.

“We have demonstrated the efficient sorting of single stem cells using a microfluidic device,” said Horacio Espinosa, James and Nancy Farley Professor of Manufacturing and Entrepreneurship at Northwestern University’s McCormick School of Engineering, who led the study. “What is elegant about the method is that it doesn’t involve any active forces, complex design elements, or labeling with expensive anti-bodies. It relies solely on the inherent fluidic forces to sort cells.”

Biologists currently culture and analyze stem cells as free-floating clusters, which contain an unknown mixture of stem cells and different populations of progenitor cells. Cells in the interior of the cluster often go unnoticed if they start differentiating prematurely, losing their “stemness.” Researchers have long looked for ways to safely isolate single stem cells from these clusters.

“Previous efforts to address this involved breaking up the clusters using mechanical or chemical methods, neither of which are 100 percent efficient,” said John A. Kessler, Ken and Ruth Davee Professor of Stem Cell Biology at the Feinberg School of Medicine, and coauthor of the study.

Made of a transparent, flexible polymer, the team’s device is shaped like an Archimedean spiral. As fluid containing the neural stem cells and progenitor cells flows through the spiral, inertial forces arrange and sort the cells by size. The forces in the device’s microchannel are size dependent, so they interact with different-sized particles in the fluid differently. The smaller cells move toward the inner wall of the device while the larger clusters move toward the middle. The stem cells are sorted from the other progenitor cells and isolated.

The slow, inertial flow also reduces stress on the cells, resulting in a high percentage (more than 90 percent) of viable cells with preserved multipotency.

“Because the device operates in a low shear-stress regime, it’s very gentle on stem cells,” said Cheng Sun, associate professor of mechanical engineering, who also served as an author on the paper.

Supported by the National Science Foundation and National Institutes of Health, the research is described in the October 21 issue of Lab on a Chip, a journal published by the Royal Society of Chemistry. Shiva Prasad Nathamgari, a PhD student in Espinosa’s lab, was the paper’s first author.