Virtual reality can help treat severe paranoia by allowing people to face situations that they fear, an Oxford University study with patients from the Oxford Health NHS Foundation Trust has found. The virtual reality simulations allowed the patients to learn that the situations (such as a crowded lift) they feared were actually safe.

The study, funded by the Medical Research Council, is published today in the British Journal of Psychiatry. It combines evidence-based psychological treatment techniques with state-of-the-art virtual reality social situations to reduce paranoid fear.

About 1-2% of the population has severe paranoia, typically as a central feature of mental health disorders such as schizophrenia. Patients show extreme mistrust of other people, believing that others are deliberately trying to harm them. The condition can be so debilitating that sufferers may be unable to leave the house.

Coping mechanisms such as avoiding social situations, reducing eye contact or making any social interaction as short as possible worsen the situation, since they reinforce paranoid fears: patients come to believe that they avoided harm because they used these ‘defense behaviors’.

The research team, led by Professor Daniel Freeman from Oxford University’s Department of Psychiatry, wanted to test whether patients could ‘re-learn’ that a situation was safe, by experiencing situations they feared without using their defense behaviors.

But being in a situation they fear is very difficult for many patients, since it causes intolerable anxiety. To overcome this challenge, the team used virtual reality to recreate social situations which patients found fearful.

Thirty patients attending treatment services at Oxford Health NHS Foundation Trust took part in the study. All the patients went into virtual reality simulations with increasing numbers of computer characters (‘avatars’) – seeing many people at the same time would normally make these patients quite anxious. But participants were told that by staying in the situations, they would relearn that they were safe. A train ride and a lift scene were used. 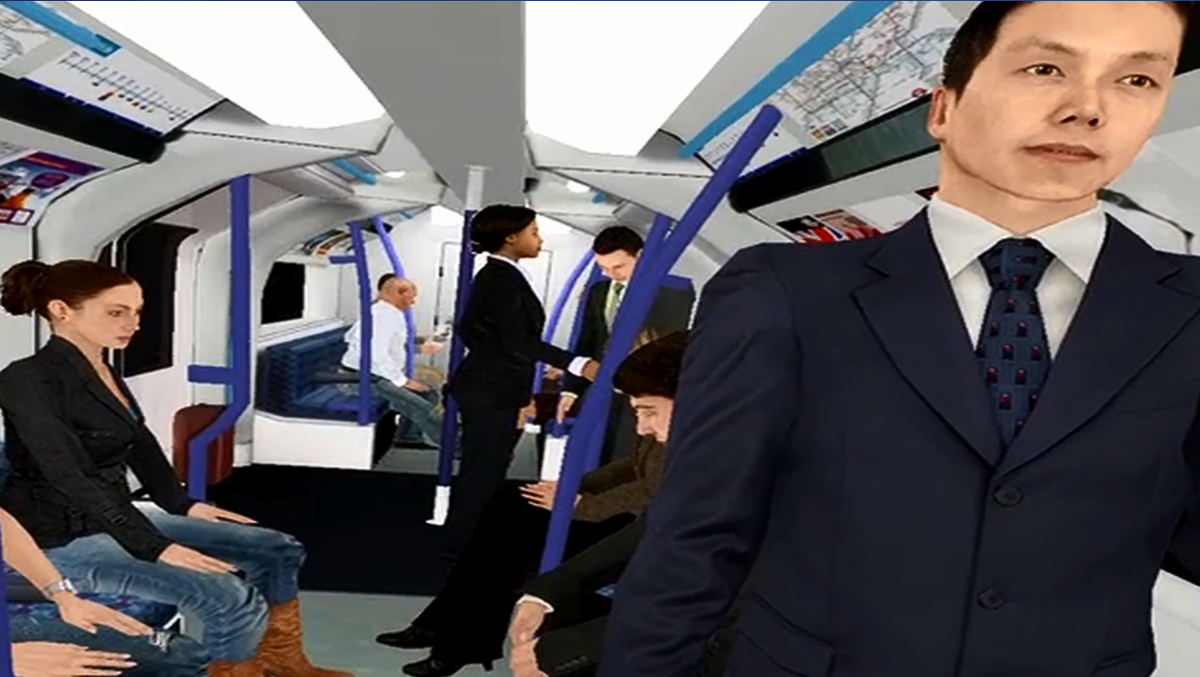 The patients were randomly given different instructions on how to deal with these situations in virtual reality. One group were encouraged to use their normal defense behaviors: they were told that it would work a bit like getting into cold water, that when you first get in it feels uncomfortable, but after a while you get used to it, as long as you stay in.

The other patients were encouraged drop their defenses and try to fully learn that they were safe by approaching the computer characters and looking at them – holding long stares or standing toe-to-toe with avatars.

The patients who fully tested out their fears in virtual reality by lowering their defenses showed very substantial reductions in their paranoid delusions. After the virtual reality therapy session, over 50% of these patients no longer had severe paranoia at the end of the testing day.

There were even benefits for those who confronted situations they feared in virtual reality while still using their defenses: around 20% of this group no longer having severe paranoia at the end of the testing day.

Patients who fully tested out their fears in virtual reality were later much less distressed even when in a real world situation, such as going to the local shop. Further research is needed to see if the benefits are maintained beyond the testing day.

Professor Freeman, the study lead at Oxford University and clinical psychologist at Oxford Health NHS Foundation Trust, said: ‘Paranoia all too often leads to isolation, unhappiness, and profound distress. But the exceptionally positive immediate results for the patients in this study show a new route forward in treatment. In just a thirty minute session, those who used the right psychological techniques showed major reductions in paranoia.

‘It’s not easy work for patients, since lowering defenses takes courage. But as they relearned that being around other people was safe we saw their paranoia begin to melt away. They were then able to go into real social situations and cope far better. This has the potential to be transformative.’

Professor David Clark, a member of the study team, said: ‘There is growing evidence that psychological treatments can have a major beneficial impact on the lives of people suffering from psychosis. Virtual reality assisted treatment has great potential because, as the price of the equipment makes it more accessible, much treatment could be delivered in people’s homes.’

Dr. Kathryn Adcock, Head of Neurosciences and Mental Health at the Medical Research Council, which funded the study, said: ‘Virtual reality is proving extremely effective in the assessment and treatment of mental health problems. This study shows the potential of its application to a major psychiatric problem. There is a lot of work to do be done in testing the approach in treating delusions but this study shows a new way forward.’

VR for Psychological Treatment
Virtual reality has been used to treat a number of psychological disorders. It has several major advantages over exposing patients to a real-life situation. Peoples’ minds and bodies react as they would in the real world but, because the patients know the situation is artificial, they are much more confident about trying out different psychological techniques. They can gradually build up the difficulty level of the situations so that learning can be made at a manageable pace.