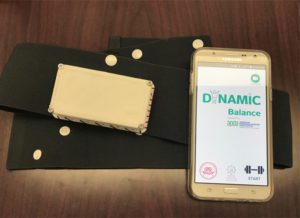 [Image from University of Houston]

The research team developed the Smarter Balance System (SBS) to help guide patients through balance exercises while using wearable technology. It is designed to help people regain stable balance and confidence in doing things at home.

“Our overarching goal is to improve their quality of life by improving postural stability, reducing the number of falls and increasing their confidence in daily activity,” said Beom-Chan Lee, an assistant professor and principle investigator of the study, in a press release.

The wearable device consists of a belt that is lined with vibrating actuators that help create a personalize, in-home rehabilitation program based on a patient’s range of motion. With touch guidance, all movements are mapped in real-time to a smartphone for visual guidance.

“This smartphone application records and creates a custom motion for their body tilt based on their individual limits of stability,” said Alberto Fung, a University of Houston graduate student who is a part of Lee’s Sensori-Motor Augmentation and Rehabilitation Technology research group. “The touch guidance from the vibrating actuators is almost acting as if a physical therapist is guiding them.”

Parkinson’s disease is a progressive and chronic movement disorder. About 1 million people in the U.S. have Parkinson’s disease, according to the Parkinson’s Disease Foundation. It causes tremors of the hands, arms, legs, jaw and face and people who have the disease also experience slowness of movement, rigidity or stiffness of the limbs and trunk and even impaired balance and coordination.

Generally, treatment options include medication or deep brain stimulation. However, the postural instability that causes falling is typically unresponsive to medication.

“It’s important to develop a system that is easy to use and reality available in the home environment,” Lee said. “Most of the time, patients have to rehab at a clinic but there might be limited access. We’re not trying to replace traditional therapy but there is a shortage of physical therapists.”

The information that SBS gathers is sent to a secure online server that doctors and physical therapists can access to track the progress of a user and possibly adjust the therapy they are participating in.

“Our system is centered around the user,” Fung said. “It minimizes manual interactions and is mostly automated. The patients who have tested the system say it’s very easy to use and that’s very rewarding.”

Parkinson’s patients tested the belt in a six-week study at home. The researchers on the study said they showed “noticeable improvement.”

They are currently improving the technology to be able to test it in more human subjects and hopes to commercialize the technology by summer time next year.

A University of Rochester research team also recently developed a wearable skin patch with sensors that could measure movement and determine what would be the best treatment option for the patient.

This research was funded by a research grant from the American Parkinson Disease Association.