In order to diagnose a deadly disease, South Australia, Texas and Ethiopia are collaborating with 3D printed technology to find pesky parasites.

The kit is designed to diagnose leishmaniasis, a disease caused by parasites that can produce ulcers on the skin and mouth, and sometimes even resort to death. Currently in the testing stage, the kit is being examined by Armauer Hansen Research Institute (AHRI) in Addis Ababa, Ethiopia.

The World Health Organization estimated nearly 1 million new cases and 30,000 deaths occur every year from leishmaniasis, usually in people who live in poverty or unclean environments. Although this disease has the potential to lead to death, leishmaniasis is curable if diagnosed and treated early.

Dr. Gadisa, in Addis Ababa, noted many difficulties in testing for the disease in Ethiopia. Currently, the cost of the liquid medium used for testing is extremely high, having microscopes on hand to view the samples is difficult and it can take over a week to get results.

In result, Dr. Gadisa created a design for a test tube that requires 15 less microliters of reagent and could provide results in three days or less. Unfortunately, he lacked the tools to build a prototype in Addis Ababa.

This is where Andrew Nerlinger, director of PandemicTech in Austin, offered to work with Dr. Gadisa as an incubator on the pilot test projects. Nerlinger also brought Matt Salier, director of Flinders University’s New Venture Institute in South Australia, into the equation.

“When I eventually described the project to Matt Salier during the South by Southwest conference in March 2017, he offered to collaborate and introduced me to NVI’s Raphael Garcia, who ultimately worked directly with Dr. Gadisa and me on several design iterations resulting in the prototype depicted in the most recent photos,” Nerlinger said.

The prototyping process was done on NVI’s Stratasys Objet Connex 3D printer and took less than four months. Various solutions were considered through a Design-Thinking process before selecting the best fit liquid that could be designed on CAD software. 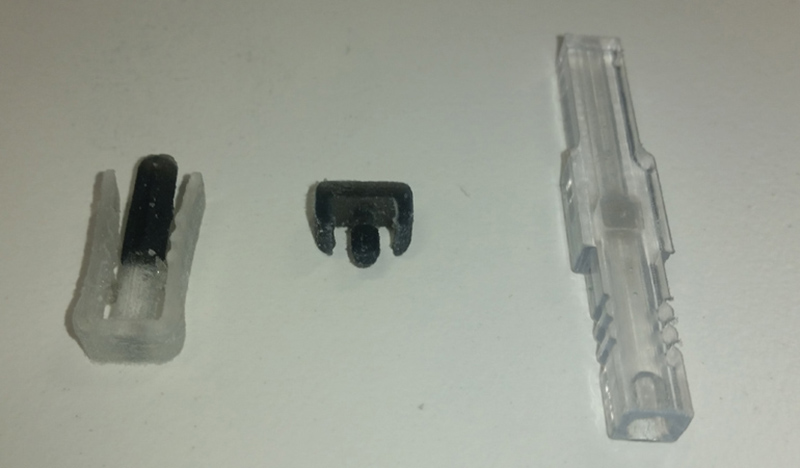 3D-printed test tube and caps that form part of the test kit.

The first prototype was made using a liquid resin and had three main parts: a main body that could hold the fluid, a cork on top to plug the culture tube and a bottom plug to clean the tube. The main body contains a central hole throughout the unit, which the plugs connect to in order for the culture tube to be re-used and cleaned.

This design was redefined many times in order to increase the tube’s durability and clearness for microscopic inspection. Many materials were printed for the top and bottom plugs to ensure a clean and solid sealant.

In total, the kit was less than A$5,000 to create and has been packaged in an off-the-shelf Pelican case with foam laser-cut. The pack comes with 3D printed microscopes that can attach to a smart phone camera, making the phone become an improved 60x magnification microscope. The smartphone photos are then used for diagnostic purposes.

“The new testing device will allow more patients to be treated earlier and decrease the amount of time it takes to obtain a diagnosis. It will also potentially allow health workers to provide a diagnosis to patients while conducting medical work in the remote regions often most impacted by leishmaniasis, said Nerlinger. “If the testing is successful then the opportunity exists to build a financially sustainable social impact company around the testing kit that brings together resources from Ethiopia and Australia.”

Salier said he hopes to continue to find innovative projects and teams than can address large-scale problems society faces. Despite the team being more than 10,000 km apart, they hope to inspire more individuals to work together from all facets of life and utilize tools that some parts of the world do not have access to.

“We don’t need more software to solve problems already solved 10 times over, what we do need is innovation which has impact, that creates value by applying new approaches to global challenges,” Salier said.