The Zika virus epidemic comes at a time when new stem cell techniques for studying the brain are being refined and tested. On April 22 in Cell, Johns Hopkins University School of Medicine researchers unveil brain-region-specific organoids that show in three dimensions how the virus affects the human brain. The organoid data support that Zika prefers to infect neural stem cells and that the extent of damage differs depending on time of infection.

Organoids are clumps of tissue grown in the laboratory that mimic how organs naturally form. Brain organoids–also called mini-brains–have been actively used in research for years, but they are limited by their high cost, lack of access for most labs, and tricky protocols that prevent clear control experiments. The Hopkins group, led by Guo-li Ming and Hongjun Song, solved these problems by 3D printing miniaturized spinning bioreactors to mass produce brain-region-specific organoids from human stem cells. 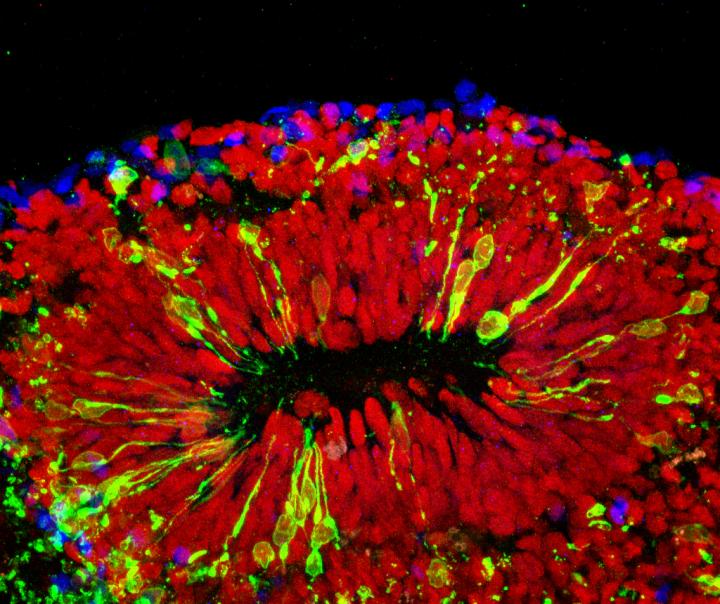 Ming and Song were part of the team in early March that helped link Zika infection to neural stem cell death (Cell Stem Cell, 10.1016/j.stem.2016.02.016), but those pilot experiments were done in two-dimensional tissue cultures that may not fully recapitulate features in normal brain development. The bioreactors allowed the researchers to do the studies they really wanted to carry out–namely, look at Zika infection in developing neural tissues. “When the Zika crisis came up, we saw that we have the perfect system to study the impacts of the virus,” says Song, who directs the Stem Cell Program at John Hopkins Medicine Institute for Cell Engineering.

The mini-bioreactors were used to make three types of brain-region-specific organoids (forebrain, midbrain, and hypothalamus), which survive and grow for up to 100 days. This time span allowed the researchers to induce Zika infection during developmental stages equivalent to very early and mid-pregnancy. The 3D experiments replicated previous work finding that the virus prefers to infect neural stem cells and supported clinical findings that the developing brain is most at risk during the first trimester.

“The organoids are much smaller and they’re not generating neurons efficiently when they are infected with the Zika virus,” says Ming, a Johns Hopkins Medicine professor of neurology. “At the later stages, you still see preferred infection of the neural progenitor cells, although there is some infection of the neurons as well, and the cell death and reduction in proliferation is consistent with what we saw in the 2D cultures.”

“The data from the Zika virus really highlights the power of this model system where we can study different stages of the disease and look at the mechanisms behind infection,” Song says. “With the bioreactor, the model now has power as a preclinical testing ground for potential therapies.”

The researchers are making the technology in their Cell paper accessible to the scientific community and are currently testing FDA-approved compounds on the organoids to see whether any can manage Zika infection, with an additional future challenge being how to deliver a potential Zika therapy to the fetus.