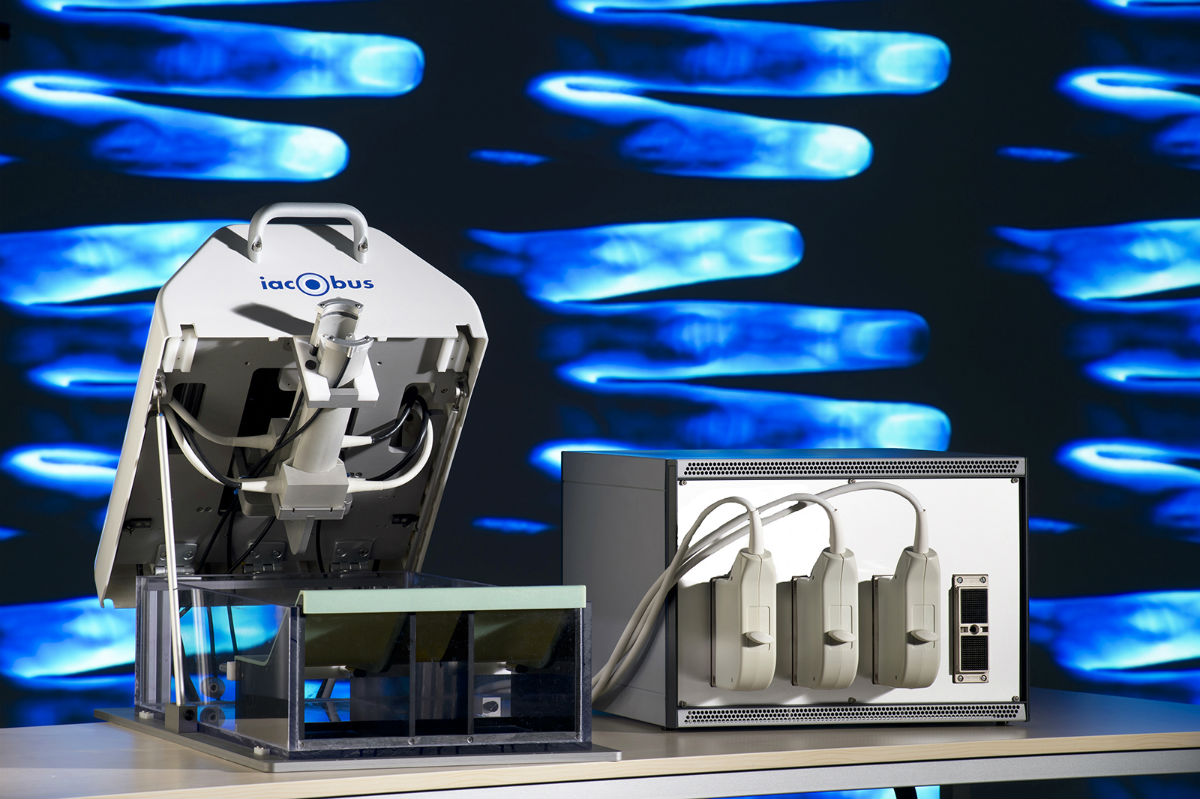 Joint inflammation (arthritis) is a common problem in medical practice and can be due to a variety of causes. Many types of inflammatory disorders affecting the joints belong to the diverse group of rheumatic diseases. The most common ones are rheumatoid arthritis and osteoarthritis which frequently affect the joints of the hands. These joint diseases are chronic in nature and cannot be cured yet. However, an early diagnosis and thus early medical treatment tremendously improves long-term outcome. That is why experts working on the EC-funded project IACOBUS led by the Fraunhofer Institute for Biomedical Engineering IBMT are developing a finger scanner which in the future will allow arthritis of the hands to be diagnosed at a very early stage. The team will be presenting a prototype of the new technology at the MEDICA trade fair in Düsseldorf from November 16 – 19 (Hall 10, Booth G05).

Human joints are incredibly high-tech. Layers of smooth cartilage facilitate swift motion of the bones without friction and the inner lining of the joint capsule, the so-called synovial membrane, shrouds the joint in a casing that constantly produces its own lubricant. For individuals suffering from chronic arthritis, however, this process is severely disturbed by an inflammation of the synovial membrane – which is most severe and destructive in cases of rheumatoid arthritis. Over time, inflammation of the synovium results in damage to the cartilage and even the bones of the joints thus causing severe pain and stiffening of the joints.

Chronic arthritis such as rheumatoid arthritis has no cure as yet, but when caught at an early stage it can be held in check successfully using medication. However, early detection of arthritis requires suitable imaging techniques. Conventional X-ray imaging will only detect typical features of arthritis at a fairly advanced stage. By contrast, use of Doppler ultrasound is more likely to detect arthritis at an earlier stage by visualizing changes in local blood flow. Increased blood flow in the inflamed and thickened synovial membrane is a typical sign of the condition, caused not only by widening of existing blood vessels but also by formation of new blood vessels as a result of the inflammatory process. However, since formation of blood vessels starts off very small with a correspondingly low blood flow, its detection by Doppler ultrasound at an early stage still remains challenging. Magnetic resonance imaging (MRI) can detect arthritic changes of cartilage and bone earlier than X-ray but is significantly more expensive than X-ray and Doppler ultrasound.

Scanner Searches Joints for Sites of Inflammation
To improve the early detection of different types of arthritis, a European consortium composed of several research institutions and companies led by the Fraunhofer Institute for Biomedical Engineering IBMT in Saarland, Germany is currently developing an alternative diagnostic technique combining ultrasound technology with novel detection methods. Specifically, this involves the use of a 3-D finger scanner that searches joints for sites of inflammation as well as other pathological changes. “One of the advantages of this method is that it enables us to detect the condition while it is still in its early stages, since many forms of arthritis affect the fingers first”, says Dr. Marc Fournelle, IACOBUS project manager at Fraunhofer IBMT.

The scanner operates using an optoacoustic imaging technique, in which the fingers are subjected to extremely short laser light pulses of variable wavelength. As the tissue absorbs these brief light pulses a minimal amount of warming occurs, which in turn causes the tissue to expand a tiny bit. This expansion then causes slight pressure pulses which the scanner registers using an acoustic transducer in the same way that ultrasound imaging procedures do. From the pattern of the pressure pulses the device can pinpoint exactly where inflammation is forming. To refine the diagnosis, the optoacoustic procedure is further enhanced by the use of a hyperspectral imaging system. This method is based on scanning the finger with a strong white light, with the result that light of certain wavelengths is absorbed by the inflamed tissue. By analyzing which wavelengths are found in the light that is not absorbed by the tissue, scientists can determine whether or not the tissue is affected. Given that both of these procedures primarily produce images of soft tissue – blood vessels in particular – the system also provides ultrasound images that are likewise created using the scanner’s acoustic transducer. “As always, the images produced by ultrasound depict soft tissue such as muscles, tendons and joint capsules as well as the surface of the bones, which means that our scanner gives physicians a familiar image to work with”, says Fournelle. The ultrasound image is then combined with the data from the hyperspectral imaging and the optoacoustic procedure, enabling doctors to clearly identify any sites of inflammation in the tissue.