Draper has developed an artificial lung technology to treat temporary respiratory failure until the patient either recovers or gets a lung transplant.

An alternative to ventilators, ECMO therapy uses equipment that bypasses the lungs to deliver oxygen directly to the blood. But ECMO doesn’t mimic the patterns in which blood flows through the blood vessel networks in the body. This results in patients often suffering from blood clotting, which requires doctors to administer anticlotting agents that carry their own side effects.

Draper engineers, who have developed technologies to treat failure of the liver, kidneys and other organs, created their biomimetic microfluidic oxygen transfer device to exchange levels of oxygen and carbon dioxide to mimic the natural human lung. The prototype builds on current ECMO technology by incorporating microfluidic techniques to more closely mimic how blood flows in the human lung.

Draper fabricated and tested the multilayer, microfluidic blood oxygenation device to demonstrate that it had a lower blood prime volume and improved blood circulation, and collaborated with investigators at Brigham and Women’s Hospital who designed experimental procedures to develop the lining of the device with human endothelial cells, thus mimicking the anti-thrombotic surface present in human capillaries. 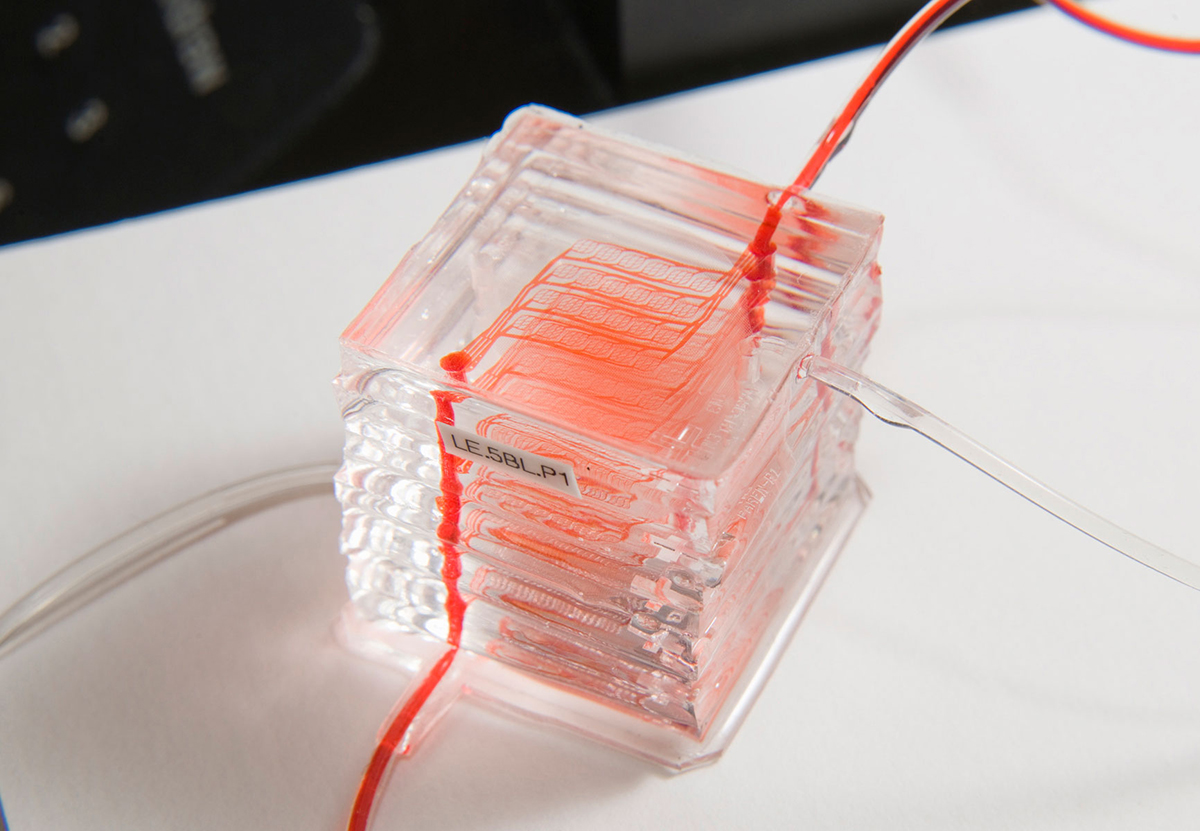 “Our technology is designed to overcome the problems with current ventilators and with current ECMO,” said Jeff Borenstein, Laboratory Technical Staff at Draper. “The mechanical ventilators force oxygen through damaged lungs, so the idea to move to ECMO is to let the lungs rest and to exchange oxygen and carbon dioxide directly with the blood. We, together with our Brigham and Women’s Hospital collaborator Dr. Guillermo Garcia-Cardena, associate professor of Pathology at Harvard Medical School, are trying to make a superior technology that improves the safety of ECMO.

“The problem with ECMO technology today is the blood tends to clot very rapidly in ECMO machines, and the way doctors get around that is to administer anticlotting agents, so patients end up in a dangerous balance between clotting and bleeding. Our technology aims to overcome this problem by making the device channels that the blood flows through more biologically relevant and mimicking endothelial-lined capillary networks in the body.”

Initially, the work began as an IR&D (independent research and development) project, but there was so much promise in the biomimetic microfluidic oxygen transfer device, eventually, engineers received funding from the National Institutes of Health (NIH).

The device is expected to undergo animal testing over the next two years and is roughly three to four years away from clinical use. Draper’s ultimate goal is to create a device that can be used long term, like an oxygen tank, as a more permanent solution for lung failure.