A new Avalere analysis finds that 60 percent of hospitals participating in Medicare’s Comprehensive Care for Joint Replacement (CJR) model could face penalties based on their cost performance. Under this model, which begins on April 1, roughly 800 hospitals will be at risk for all Medicare spending associated with hip and knee replacements and any charges within 90 days of discharge, otherwise known as an episode of care.  Hospitals’ performance will be compared to both their historical spending, as well as the regional spending levels. Avalere found that episodes at 60 percent of participant hospitals currently cost more than episodes at their regional peers. These episodes could subject hospitals to penalties under the demonstration if they do not rein in total episodic costs. 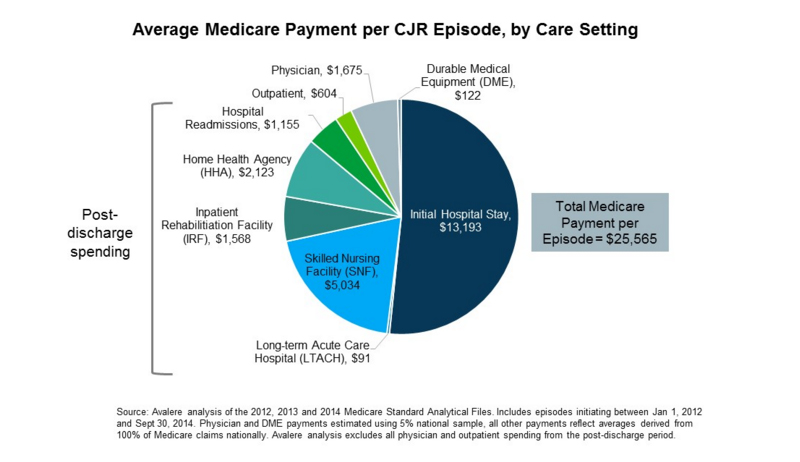 CJR represents the Center for Medicare & Medicaid Innovation’s (CMMI’s) first mandatory program as the agency implements alternative payment models that transition providers from a fee-for-service to value-based payment environment. This model will be mandatory for most hospitals in 67 regions. To date, the Centers for Medicare & Medicaid Services (CMS) has relied on voluntary models, which generally involve a small number of providers.  By transitioning to a mandatory model, CMS will engage a broader group of providers, including those that until now have been less involved in the voluntary payment innovation models. The new mandatory model represents a big change in how the Department of Health and Human Services and the Affordable Care Act (ACA) will drive change.

“Most past CMS initiatives have stimulated activity among early adopters, but the mandatory programs are CMS’ attempt to bring the remaining hospitals into a value-based payment world,” said Josh Seidman, senior vice president at Avalere Health. “For many of those providers sitting on the sidelines of alternate payment models, this new initiative will be a wake-up call.”

Avalere’s analysis also reveals that 39 percent of total spending on hip and knee replacement episodes is tied to post-discharge care, including post-acute care facilities (LTACH, SNF, IRF, HHA) and hospital readmissions. For the first time, hospitals will be responsible for reducing healthcare spending after discharge and assessing the best way to ensure that patients receive the care they need in the lowest-cost setting.

“The reality is that most hospitals don’t know where their patients go after they are discharged,” noted Fred Bentley, vice president at Avalere. “Their success under CJR will hinge on being able to track patients and partner with high-performing post-acute care providers.”

In the final year of the Obama Administration, Avalere experts expect CMMI to develop more mandatory models, similar to CJR and the recently proposed Part B drug payment model, as they look to accelerate the transition to value-based care.

This column first appeared on Avalere.