Without doubt, antibiotic drugs have saved hundreds of millions of lives from bacterial infections that would have otherwise been fatal. But their inappropriate use has led to the rise of antibiotic-resistant superbugs, which now infect at least 2 million Americans every year and are responsible for thousands of deaths1. I’ve just come from the World Economic Forum in Davos, Switzerland, where concerns about antibiotic resistance and overuse was a topic of conversation. In fact, some of the world’s biggest pharmaceutical companies issued a joint declaration at the forum, calling on governments and industry to work together to combat this growing public health threat2.

Many people who go to the doctor suffering from respiratory symptoms expect to be given a prescription for antibiotics. Not only do such antibiotics often fail to help, they serve to fuel the development of antibiotic-resistant superbugs3. That’s because antibiotics are only useful in treating respiratory illnesses caused by bacteria, and have no impact on those caused by viruses (which are frequent in the wintertime). So, I’m pleased to report that a research team, partially supported by NIH, recently made progress toward a simple blood test that analyzes patterns of gene expression to determine if a patient’s respiratory symptoms likely stem from a bacterial infection, viral infection, or no infection at all. 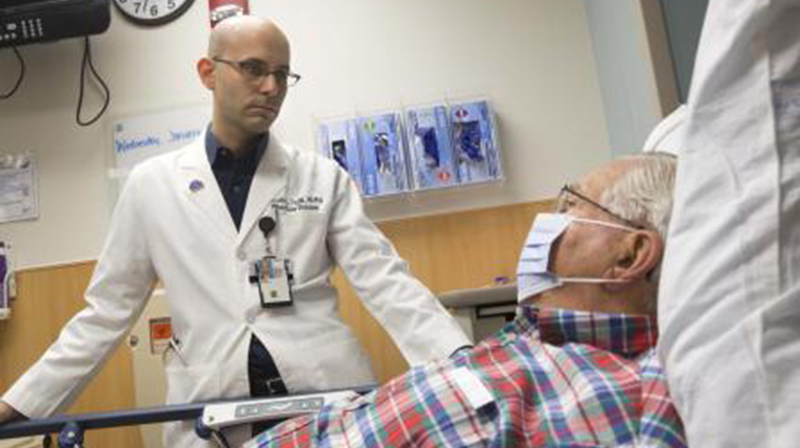 In contrast to standard tests that look for signs of a specific infectious agent—respiratory syncytial virus (RSV) or the influenza virus, for instance—the new strategy casts a wide net that takes into account changes in the patterns of gene expression in the bloodstream, which differ depending on whether a person is fighting off a bacterial or a viral infection. As reported in Science Translational Medicine4, Geoffrey Ginsburg, Christopher Woods, and Ephraim Tsalik of Duke University’s Center for Applied Genomics and Precision Medicine, Durham, NC, and their colleagues collected blood samples from 273 people who came to the emergency room (ER) with signs of acute respiratory illness. Standard diagnostic tests showed that 70 patients arrived in the ER with bacterial infections and 115 were battling viruses. Another 88 patients had no signs of infection, with symptoms traced instead to other health conditions.

The researchers analyzed each patient’s blood sample, comparing expression levels of about 25,000 genes in search of telltale patterns, or signatures, that corresponded with either a viral infection, bacterial infection, or no infection at all. The analyses paid off. The blood of people infected with viruses displayed a unique genomic signature that includes changes in the expression of genes known to fight off viruses and others involved in cellular pathways that viruses like to hijack to replicate. A unique signature was also found for bacterial infections, which activate a wider range of cellular processes. Importantly, both signatures were distinct from those seen in people with noninfectious respiratory problems.

The researchers found that their gene expression signatures correctly identified the cause of illness in 87 percent of cases. That’s better than an inflammatory biomarker called procalcitonin that is sometimes used with other tests in the ER and intensive care units to help identify systemic bacterial infections, primarily in patients who are critically ill. The gene expression test could also be a lot simpler than individually testing for the presence of a long list of suspected viruses and bacteria.

The signatures that the research team developed also showed a high degree of accuracy in diagnosing another 328 people represented in five publicly available datasets. The researchers could even tell when a person had been simultaneously infected with a bacteria and a virus!

Respiratory infections are a major global health issue and one of the top causes of death in people all around the world, with millions dying every year5. They are also one of the most common reasons for seeking medical care. Here in the United States, more than 40 percent of antibiotic prescriptions written by doctors at outpatient clinics are prompted by respiratory symptoms. This explains why the Task Force for Combating Antibiotic-Resistant Bacteria, created by President Obama in 2014, prioritized the development of innovative diagnostics to better define and monitor infection.

With further testing and development, this new diagnostic platform may offer a valuable tool to help fill this important need, improving patient care while reducing the inappropriate use of antibiotics. As antiviral medications become more widely available, such a test could help to ensure appropriate use of those drugs too. With the support of the Antibacterial Resistance Leadership Group, funded by NIH’s National Institute of Allergy and Infectious Diseases, the researchers will continue to explore the test’s utility for diagnosing infections in diverse populations, including very young children, people with chronic viral infections, and those whose immune systems are compromised.

This article first appeared on the NIH Director’s Blog, http://directorsblog.nih.gov/ . Reprinted with permission from the National Institutes of Health (NIH). Francis Collins, M.D., Ph.D., is Director of NIH.