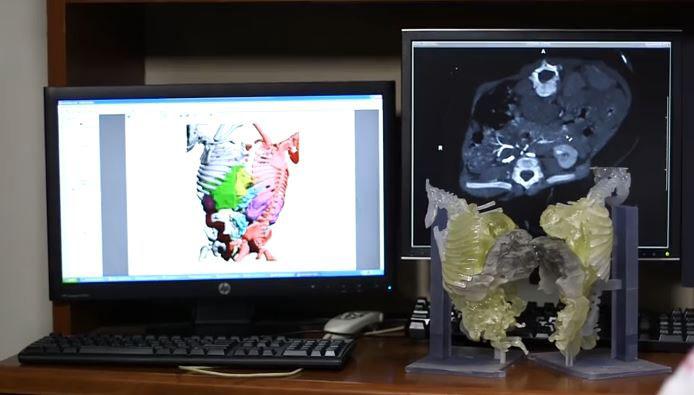 This is a 3-D color segmentation of CT data with 3-D model. (Credit: Radiological Society of North America/Texas Children’s Hospital)

A combination of detailed CT imaging and 3D printing technology has been used for the first time in the surgical planning for separation of conjoined twins, according to a study presented today at the annual meeting of the Radiological Society of North America (RSNA).

Conjoined twins, or twins whose bodies are connected, account for approximately one of every 200,000 live births. Survival rates are low and separating them through surgery is extremely difficult because they often share organs and blood vessels.

Specialists at Texas Children’s Hospital in Houston brought a new approach to these challenges when they set out to surgically separate Knatalye Hope and Adeline Faith Mata, conjoined twins from Lubbock, Texas. Knatalye and Adeline were born on April 11, 2014, connected from the chest all the way down to the pelvis.

“This case was unique in the extent of fusion,” said the study’s lead author, Rajesh Krishnamurthy, M.D., chief of radiology research and cardiac imaging at Texas Children’s Hospital. “It was one of the most complex separations ever for conjoined twins.”

To prepare for the separation surgery, Dr. Krishnamurthy and colleagues performed volumetric CT imaging with a 320-detector scanner, administering intravenous contrast separately to both twins to enhance views of vital structures and help plan how to separate them to ensure survival of both children. They used a technique known as target mode prospective EKG gating to freeze the motion of the hearts on the images and get a more detailed view of the cardiovascular anatomy, while keeping the radiation exposure low.

“The CT scans showed that the babies’ hearts were in the same cavity but were not fused,” Dr. Krishnamurthy said. “Also, we detected a plane of separation of the liver that the surgeons would be able to use.”

The team translated the CT imaging results into a color-coded physical 3D model with skeletal structures and supports made in hard plastic resin, and organs built from a rubber-like material. The livers were printed as separate pieces of the transparent resin, with major blood vessels depicted in white for better visibility. The models were designed so that they could be assembled together or separated during the surgical planning process. The surgical team used the models during the exhaustive preparation process leading up to the surgery.

On February 17, a little more than 10 months after they were born, the Mata twins underwent surgical separation by a team of more than 26 clinicians, including 12 surgeons, six anesthesiologists and eight surgical nurses. The official separation took place approximately 18 hours into the 26-hour surgery.

The 3D models proved to be an excellent source of information, as there were no major discrepancies between the models and the twins’ actual anatomy.

“The surgeons found the landmarks for the liver, hearts and pelvic organs just as we had described,” Dr. Krishnamurthy said. “The concordance was almost perfect.”

Dr. Krishnamurthy expects the combination of volumetric CT, 3D modeling, and 3D printing to become a standard part of preparation for surgical separation of conjoined twins, although barriers remain to its adoption.

“The 3D printing technology has advanced quite a bit, and the costs are declining. What’s limiting it is a lack of reimbursement for these services,” he said. “The procedure is not currently recognized by insurance companies, so right now hospitals are supporting the costs.”

“When I showed the mother the model and explained the procedure, she held my hand and thanked me,” Dr. Krishnamurthy recalled. “They said, ‘For the first time, we understand what is going to happen with our babies.'”

Knatalye Hope returned home in May 2015 and her sister Adeline Faith came home a month later. They are both doing well and have a Facebook page, “Helping Faith & Hope Mata,” with updates on their progress.