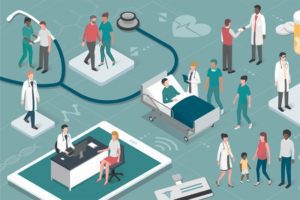 Contact lenses that deliver medications directly to the eye over a period of days or weeks were the recent grand prize winner of the Massachusetts Institute of Technology’s Sloan Healthcare Innovation Prize.

The MIT Sloan Healthcare Innovation Prize competition had 8 finalists who pitched their healthcare innovations to judges from Optum and other local venture firms, as well as an audience in MIT’s Wong Auditorium.

The lenses can be worn all day for two weeks to treat glaucoma or help heal the eyes after surgery. Traditional treatment involves using eyedrops, but Theraoptix suggests those can be ineffective when the liquid drips out of the eye or if the patient stops treatment.

The team’s pitch included preclinical trial results of the therapeutic that shows extended survival rates of cancer patients by a few months when compared with just immunotherapy. Strand Therapeutics also reported that the therapeutics are safe, easy to deliver and cheap to produce.

Healthcare Hospitality Systems received the audience choice award for its audio device that points a sound beam at a listener. The researchers demonstrated the device by facing the device directly toward the audience. The device was clearly audible, but when flipped horizontally, the sound was no louder than a whisper.

The company says the device could be installed in ceiling tiles in hospitals above hospital beds to connect wirelessly to televisions and allow patients to watch televisions without disturbing other patients.

Other participants in the MIT Sloan Healthcare Innovation Prize competition include Iterative Scopes, who is developing computer vision algorithms for detecting lesions that could signal colorectal cancer in colonoscopies; SurgiBox, who is creating clear enclosures that sit on top of a surgery patient to create a portable sterile environment; Umbulizer, who is developing a low-cost, portable device that brings continous ventilation to developing countries; Kinematics, who is creating smart shoe insoles that use sensors and real-time data for gait analysis and O2Map, who is developing an implantable sensor to monitoroxygen in tumors.

Each year, the competition has dozens of applications that get narrowed down to 8 finalists who give their sales pitch. The finalists are also offered mentorship, networking opportunities and a one-day workshop for developing business pitches.