Engineers at the University of California San Diego have developed a new non-invasive method to detect infections in prostheses used for amputees, as well as for knee, hip, and other joint replacements. The method, which is at the proof of concept stage, consists of a simple imaging technique and an innovative material to coat the prostheses.

“Current methods to detect infection require patients to undergo burdensome imaging procedures, such as an MRI, CAT scan, or X-rays,” says Ken Loh, a professor of structural engineering at the Jacobs School of Engineering at UC San Diego and the lead researcher on the project. “By contrast, our method could be easily used in a doctor’s office or in the home and, potentially, provide quantitative diagnostic-relevant information about the extent and locations of the infection.”

(a) A plastic rod was used as a prosthesis surrogate. (b) The rod was coated with a pH-sensitive thin film sensor and (c) tested experimentally using a prototype ECT mapping system. (Image credit: UC San Diego)

The imaging technique the researchers relied on is an improved version of electrical capacitance tomography (ECT), which measures the human tissue and prosthesis’ electrical properties using safe electrical fields. An algorithm processes the measurement data to allow physicians to reconstruct a predetermined area’s electrical properties to reveal the health of the tissue, bone and prosthesis. Infection causes changes in the field, which can be detected via ECT. Loh and PhD student Sumit Gupta improved the algorithm to make it more accurate.

In addition, Loh and Gupta developed a thin-film sensor that could be sprayed onto a prosthesis to improve the imaging technique’s ability to detect infection or other issues occurring in the tissue or prosthesis.

“This is a new modality of sensing that hasn’t been widely used to detect infection before,” Loh says. 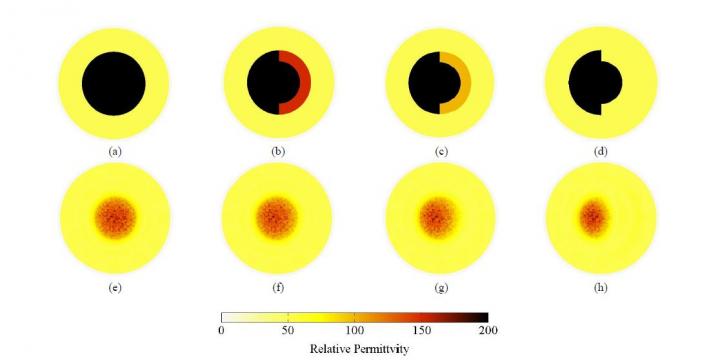 During simulations, a prosthesis was assumed to be embedded in human tissue (a). Figures b to c show how infection changes the electrical properties in a semicular region at the tissue-prosthesis interface. (e) to (h): electrical maps from ECT simulations showed that the technique was able to capture changes due to degradation (or infection). (Image credit: UC San Diego)

To test their system, the researchers spray-coated a plastic rod — as a surrogate of an actual prosthesis — with the thin-film sensor and then exposed it to several solutions that changed its pH. After each exposure to a solution, the researchers used their prototype system to scan the rod to obtain electrical measurements for their ECT algorithm. The method successfully detected the location of the rod and a change in the rod’s electrical properties due to changes in pH.

“The combination of these two techniques makes our method optimal and, potentially, highly sensitive to different complications related to these prostheses and implants,” Loh says.

He envisions multilayered thin-film sensors coated onto prostheses where each layer can detect different signals, such as for monitoring stresses and strains of the actual prosthesis, loosening, infection and pH changes.

Next steps would include refining the measurement setup and to conduct animal testing, which is about three years out, Loh says.