Several pediatric medical conditions, such as congenital heart disease, vascular compression, and congenital softening of the cartilage lining the trachea or bronchi, can compromise the airway and cause breathing difficulty. No matter the cause, airway obstruction in children can be life-threatening, requiring immediate attention. Corrective options such as reconstructive surgery or endoscopic stent placement are limited because of the potential for granulation formation within the lumen or increased risk of wound rupture. In a presentation at the 96th AATS Annual Meeting, investigators describe their experience with external stenting to relieve airway obstruction in 98 children over an 18-year period.

A team of surgeons in Japan has developed a technique to relieve airway obstruction in children. The technique, known as external stenting (ES), expands and stabilizes the airway by suspending its wall to a rigid prosthesis placed around the bronchus or trachea. ES avoids the problem of granulation formation resulting from endolumenal corrective approaches, such as endoscopic stent placement. In a presentation at the 96th AATS Annual Meeting, the researchers describe the ES technique in detail as well as report on indications, complications, and long-term outcomes. 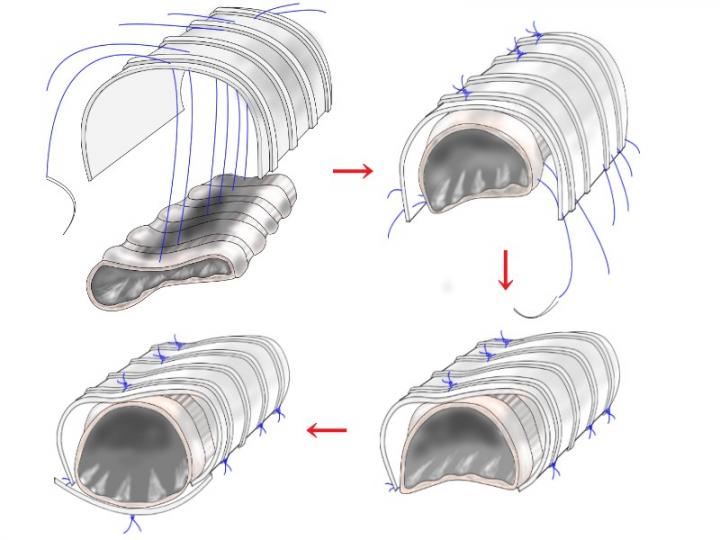 The scheme of the external stent technique. Ringed PTFE graft, involving three to five rings, is used. The larger piece stabilizes the cartilage portion using three rows of stitches and a smaller one for the membrane portion (single row). The two graft pieces are overlapped by a few millimeters and not sewn to each other. (Credit: Sakakibara Heart Institute)

“Our ES technique may provide an alternative or adjunct to established practices for relieving airway obstruction, such as aortopexy. ES is less invasive and more reliable, and is effective equally for tracheobronchomalacia with or without vascular compression. It also has the potential of allowing age-proportional growth of the airway,” explained Makoto Ando, MD, of the Department of Pediatric Cardiac Surgery at Sakakibara Heart Institute, Tokyo (Japan).

The prosthesis “grows” as the child grows. The procedure relies on a ringed polytetrafluoroethylene (PTFE) prosthesis that is cut to an appropriate length covering the obstructed airway segment (usually the length of 3 to 5 cartilage rings). The prosthesis is then cut longitudinally into two pieces, forming a sleeve around the obstructed area. A larger piece that is approximately one-half to two-thirds of the circumference is used to stabilize the cartilage portion of the airway and the smaller one with one-third of the circumference stabilizes the membrane portion of the trachea. Three rows of stitches are placed on the cartilage and a single row on the membrane. The two pieces are not sutured together, allowing for airway growth.

Over an 18-year period, 98 patients (average age 7.2 months) at two medical centers underwent a total of 127 ES for 139 obstruction sites. Airway obstruction was caused by congenital tracheobronchomalacia (cartilage weakening) in 52 cases, by vascular compression in 43 cases, and a combination of both in three cases. More than 80% of the children had cardiovascular anomalies, including ventricular septal defect, a functionally single ventricle, vascular ring/pulmonary arterial sling, and other cardiac septal or vascular defects. Eighteen had coexisting aortic arch obstruction. The children showed symptoms such as apnea, frequent respiratory infections, severe respiratory distress, and failure to wean from a ventilator. The technique is not intended for blockages caused by food or other ingested items.

Fourteen children died, mainly due to congestive heart failure, gastrointestinal bleeding, or respiratory distress. Ten patients required reoperation for re-stenosis and three required stent removal for infection. To date, 84% of the children have survived after 55 months of follow-up and 87% did not require re-operation at 59 months of follow-up. Eighty-eight percent of children were successfully weaned from a ventilator.

Many of the children studied are being followed at hospitals outside of the two surgical centers. Dr. Ando strongly recommends that patients be re-evaluated when they reach adulthood to see if the stents can be removed.

The team continues to refine the technique. Changes include shortening the graft to reduce the risk of airway perforation by the graft, especially in the right main bronchus. Placement of a sheet of PTFE between the graft and surrounding structures can also help to prevent erosion.